Webmatters : The Battle of Cambrai 1917, Moeuvres and Bourlon

With the open country in front of them General Moser’s Arras Group could hardly hide their build up from the British observers. Instead they intended by sheer weight of numbers to overpower the British lines.

As dawn broke the German artillery opened fire on the IV Corps positions. On the right in 59th Division’s area Cantaing Mill was set alight and the units in the wood subjected to a gas attack but no real attempt was made to dislodge them.

In the Bourlon sector the 47th (2nd London) Division had only just finished relieving the 62nd when the attack came and were not really fully operational (Brigadier General Bradford VC — 186th Brigade, 62nd Division — was killed by a shell near his headquarters. He is buried in Hermies British Cemetery)

Attacks against the wood were made but were beaten off and the heaviest casualties were incurred by the 1/19th London Regiment who were so badly gassed within the wood that only seventy of them were still fit for duty by the end of the afternoon.

The left of the Division was outside the wood on Bourlon Ridge and held by the 1/6th London Regiment. They were being observed by two then three German balloons as the bombardment became heavier by the moment. When the attack came the Londoners fired for all their worth but the attackers managed to infiltrate between them and the 2nd Division on their left.

Just after 1400 hours a further massive assault by the Germans pushed the 1/6th back off Bourlon Ridge, an act which threatend to turn the flank of those units still within Bourlon Wood. A timely counter-attack with the aid of the 1/8th London prevented this from happening.

2nd Division on the left of the battlefield had an unenviable position. They were not only out in the open some of them were also in the Hindenburg Line. 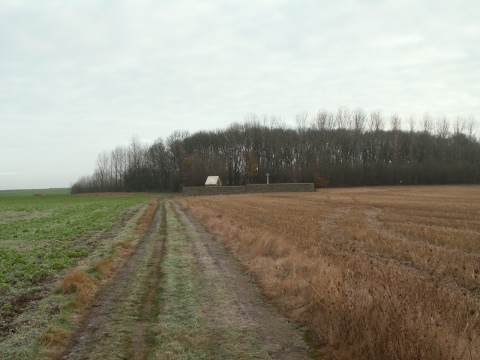 Waves of Germans were seen coming southwards from the direction of Quarry Wood whilst more were marching towards Moeuvres. The British artillery rained down on them but on they came. As they got closer to the British front line eight machine guns opened up firing 70,000 rounds into them ; but on they came.

On the right the 1st Royal Berkshire (99th Brigade) lost some of their advanced posts but hung on a little further back denying the Germans the main Cambrai Road.

On their left the 17th Royal Fusiliers were also in danger of being over run. The order went out to defend the front line with what they had rather than the outposts but before this could be achieved the Germans were upon them. Captain Walter Stone was responsible for organising his Company’s withdrawl and hung back with a small party until eventually they were surrounded. None of the party survived and Captain Stone received a posthumous Victoria Cross. He is commemorated on the Cambrai Memorial.

The struggle was a furious one but the 99th Brigade front line held despite repeated attacks throughout the day. The German dead lay piled up in front of the British positions; such had been the accuracy of the fire directed at them.

A lot has been written about the British Generals setting their infantrymen up against the German machine guns but the results were rarely different when it was Germans attacking machine guns. It took overwhelming artillery support to prevent the machine guns from being manned in the first instance — there, lay the answer. Or you invented the tank !

The 6th Brigade were astride the Canal du Nord (Which was still under construction and thus empty) near lock No 5.

The German attack on the 13th Essex at the lock was fought until the Essex had run out of ammunition and grenades and were forced to retire. An attempted counter-attack failed to recover the position.

On the left bank of the canal the 1st King’s were also in desperate need as they were being attacked from out of the village of Moeuvres and down the trench system itself from sections still held by the Germans.

The 17th Middlesex were rushed up to reinforce the King’s and Captain Allastair McReady-Diarmid distinguished himself throughout the day with his bombing ability and leadership in many of the counter-attacks which helped ensure that the position was held.

From the very first shell fired on the 20th November the 56th Division had been up in the front line holding the protective left flank of the 3rd Army. Although not directly involved in much of the fighting they had been doing their bit to ensure that the protection was given. After ten days of battle conditions they were in need of a rest.

The Germans managed to penetrate their lines where they met up with the 1st King’s and making use of their own trench systems the Germans forced the 1/16th London (Queen’s Westminster Rifles) back into the old Hindenburg front line.

This precipitated a similar withdrawl along the line, but the manoeuvre was carried out in as orderly a fashion as could be expected under such heavy pressure from seemingly numberless waves of assault. The waves though were beaten off and although ground had been conceded the Germans had not achieved anything even approaching a breakthrough.