In 1915 Canada’s two regular Cavalry regiments and single Horse Artillery Regiment were brigaded together to form the Canadian Cavalry Brigade. Initially they were supplemented by the 2nd King Edward’s Horse from the UK. In 1916, the King Edward’s Horse were replaced by a Canadian Militia Unity from Winnepeg : The Fort Garry Horse.

All were placed under the command of Brigadier General J Seely.

During the Battle of Cambrai the Canadians were attached to the 5th Cavalry Division which together with the remainder of the Cavalry Corps were supposed to have rushed through the gaps created by the tanks and infantry and thus isolated Cambrai.

One of their other tasks was to :

The task of attacking the HQ at Escadoeuvres (to the north east of Cambrai and a good distance from the start line) fell to B Squadron of the Fort Garry Horse.

By 1130 hours Brigadier General Seely had arrived at Les Rues Vertes on the southern side of the St Quentin Canal from Masnières and following consultation with his infantry counterpart ordered up the Garry’s to press on with the attack.

Discovering the main road bridge to have been damaged by a tank (See : 29th Division) Lt Col R W Paterson ordered B Squadron to search for a suitable crossing point to the east of the town. 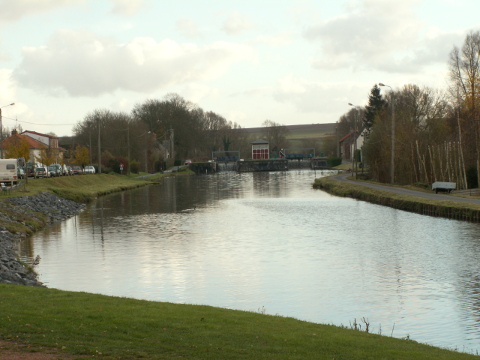 At the lock, a kilometre to the east, they found that a reconstructed bridge being used by the infantry was suitable for horses and at 1530 hours they started crossing to the far side.

Within thirty minutes B Squadron was safely across and had commenced their drive for the ridge, east of Rumilly, a couple of kilometres away.

About this time it began to rain, and taking into account the marshy land on the far side of the canal, commanders of both cavalry and infantry in the area deemed it unwise — with the imminent fall of night — to continue with a cavalry advance.

Despite the fact that it was marked on maps and aerial photographs, none of them seem to have noticed that there was another bridge more than suitable for cavalry, less than a kilometre further down the canal from where Captain Campbell and B Squadron had crossed.

The order was sent out to Lt Colonel Paterson to halt his advance and retire to the southern side of the canal. Unfortunately B Squadron were already out of communication riding at the gallop towards the enemy lines. 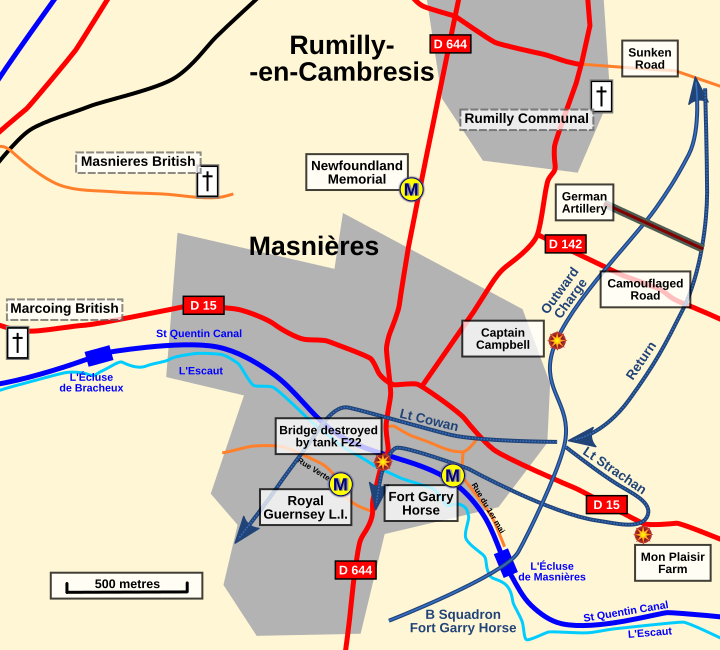 Thus commenced one of the famous cavalry charges of the war. Captain Campbell was hit by machine gun fire almost immediately after crossing the canal and it fell to Lieutenant Harcus Strachan to continue the advance.

Despite the machine gun fire, the squadron continued their charge silencing a German Field Battery on their way. A number of German infantry raised their hands in surrender but the cavalrymen had no means of dealing with prisoners and simply rode past.

At this the luck Germans re-manned their machine guns and open fire again on the disappearing cavalry.

Strachan realised that something had gone wrong and that he and his men were quite alone on the German side of the canal. They took shelter in a sunken road to the east of Rumilly. There they found that they could continue no further and were already having to fend off counter-attacks. Having stampeded the horses the party split into two groups with a view to making their way back to the Canal.

Lieutenant William Cowen was awarded the Military Cross for bringing his party safely home and Lieutenant Strachan received the Victoria Cross for his leadership. Of the 133 cavalrymen who had started out only 46 managed to return but they brought with them a number of prisoners as well as valuable information about the German dispositions.

For his courage and leadership Lt Strachan was awarded the Victoria Cross.

On 20 November 1917 at Masnières, France, Lieutenant Strachan took command of a squadron of his regiment when the squadron leader, approaching the German front line at a gallop, was killed. Lieutenant Strachan led the squadron through the enemy line of machine-gun posts and then, with the surviving men, led the charge on the German battery, killing seven of the gunners with his sword. When all the gunners were killed and the battery silenced, he rallied his men and fought his way back at night through the enemy’s lines, bringing all unwounded men safely in, together with 15 prisoners.

Born in Scotland in 1887, he emigrated to Alberta in 1910. Five years later he found himself in England and joined the Garrys as a private. Commissioned from the ranks he had already been decorated with the Military Cross for his part in a trench raid earlier in 1917. He survived the war becoming a successful banker back home in Canada.

He served his country as a Lt Colonel during the Second World War and lived to the ripe old age of 94. 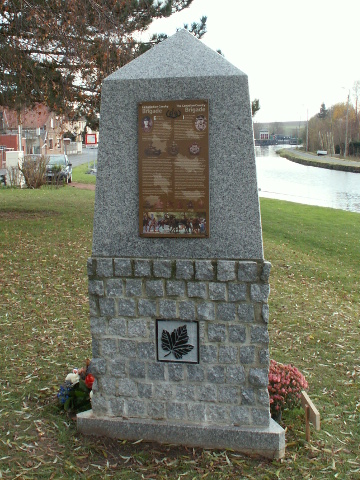 At the top of Masnières on the way towards Cambrai you will see the memorial to the Royal Newfoundland Regiment who played a leading roll in the defence of the town during the German counter-offensive. On 30th November 2017 the Royal Guernsey Light Infantry unveiled a plaque commemorating their involvement in the fighting. This can be found in Rue Verte on the southern side of the canal.