On the right flank of IV Corps the 51st (Highland) Division were supposed to advance through Flesquières, Orival Wood and then towards Fontaine Notre Dame and Cantaing.

Despite misgivings about using the new technology and the variant on tank/infantry tactics all started well for Major General Harper’s troops. The counter barrage was feeble and soon silenced.

The tanks of E Battalion out in front of 152nd Brigade crushed the outpost line and the Division crossed the Grand Ravine to the west of Ribécourt without being held up to any great extent.

On the left, D Battalion tanks led out 153rd Brigade and they were amongst the first to come up against a stouter defence. 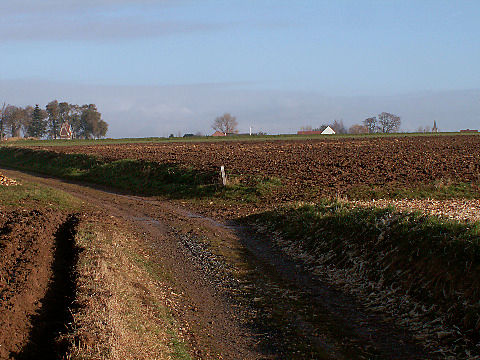 The Germans started to realise that with the tanks so far out in front it was possible to let them pass and then take on the infantry with their machine guns as they had done in the past.

The Scots pushed on but as the tanks crested the Flesquières ridge they came under sustained anti-tank fire from the German artillery.

Within minutes many of the tanks were ablaze.

Within the village machine gun fire poured out of houses which had initially been considered empty. Tanks coming up Cemetery Alley were taken out by the German artillery one by one.

Unfortunately for D Battalion the German gunners of 8th Battery, Field Artillery Regiment 108 were veteran tank destroyers having been deployed against the first French tank attack at Berry au Bac during the course of the opening day of the Chemin des Dames on 16th April 1917.

The Highlanders, no longer protected were forced back down the the slope to the Flesquières Trench system leaving behind a third of the tanks of D Battalion.

The legend of the lone gunner

An initial report made by Captain Dugdale of the 6th Division who observed Flesquières within 24 hours of the battle stated that on the ridge he saw a battery of German guns all of which had been knocked out with the exception of one. Next to it was the body of a lone gunner and in front the carcases of five tanks.

He surmised that this gunner was responsible for the destruction and the report was repeated in Field Marshall Haig’s dispatch who praised the gunner’s bravery.

The British press were not slow in taking up the story and the number of tanks increased in the telling. Misunderstanding the phrase single handed also led to a rumour that the hero in question could only have had one arm.

When the Germans realised that the enemy were singing the praises of one of their soldiers they set out to try and identify the unknown gunner.

Eventually Unteroffizier Theodor Krüger was nominated as the hero in question and Hitler ensured that a monument to him was erected in Köln: to the memory of the German Artillery. Like so many things it was not to survive the next war.

The story acted in General Harper’s favour as he was in a position to say that he had been right all along. Tanks could easily be knocked out and afforded the infantry little in the way of protection.

The tank crews had a very limited perception of what was going on around them and this was why close co-operation with the supporting infantry was so vital. The infantry would spot the danger and the tank would deal with it. In return the tank crushed the defences allowing the infantry to advance with greater ease. Hunter’s insistence of having his infantry distanced from the tanks prevented this from taking place.

It would be true to say though, that in other places along the battle front tanks out ran their infantry and suffered little in the way of consequences, but, it would also be true to say that they may well have been lucky and that the infantry were trying to keep up, so there was a difference in attitude. When such tanks did run into a difficulty the infantry were not long in arriving and knew what to do.

Flesquières was evacuated during the evening but the delay had held up both 6th Division on the right and the 62nd on the left as well as overly tiring the troops.

None of this harmed Harper in anyway at all and in fact he was promoted to Corps Commander shortly afterwards.

In places along the front of the Havrincourt Sector the Hindenburg outpost line was close to the British front line and had therefore not been subjected to the opening bombardment. To make matters harder for the advancing tanks part of Havrincourt Wood had already been felled by the Germans and this made the going difficult for the tanks of G Battalion (With a further Company of I Battalion).

On the right the 2/6th West Yorkshires of 185th Brigade took the Germans’ front trenches and entered Havrincourt where the Germans put up a stout resistance which took a number of hours to deal with. 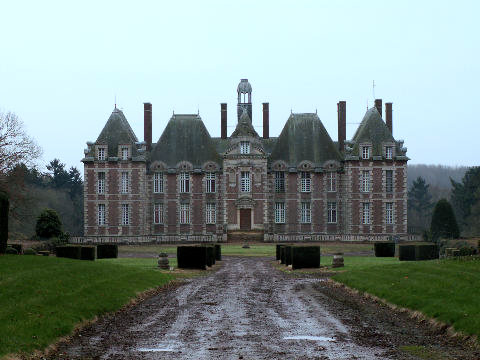 The Germans had dug a trench system across the front of Havrincourt Château reinforced with machine bunkers and these made life very difficult for the approaching men of the 2/4th KOYLI in 187th Brigade. To their left the 2/5th KOYLI moved up alongside the Canal du Nord and succeeded in taking their Blue Line by 0830 hours.

Whilst the struggle for the village of Havrincourt continued the remainder of 62nd Division readied themselves for the attack on their second objective: the Brown Line which ran all but westwards from just behind Flesquières to the canal.

Despite isolated pockets of resistance the advance continued smoothly with the tanks supporting the infantry and by 1030 hours the second objective was in British hands.

The château had been used a Headquarters by the Germans and was blown up by them. It was reconstructed in 1928 following the plan of the Château de Saint Loup sur Thouet in the Loire Valley (Louis XIII style).

On the west bank of the Canal du Nord the 109th Brigade of the Ulster Division advanced slightly to keep in line with the 62nd Division. Their initial assault had been carried out by the 10th Royal Inniskilling Fusiliers who had advanced with minimal losses as far as the Demicourt—Graincourt Road. German resistance had either melted away or surrendered.