Webmatters : The Battle of Cambrai 1917, the German counter offensive

On the 27th November Crown Prince Rupprecht of Bavaria outlined his proposals to counter the British gains. His minimal objective was to retake the lost sectors of the Hindenburg line but if possible he wanted to breach the British front completely.

The German 2nd Army was organised in Groups : the Caudry and newly formed Busigny Groups would commence the offensive from the south-east with seven Divisions, and once that blow had fallen the Arras group to the north would attack from the north with three Divisions around Bourlon.

On the British side, IV Corps had been carrying out reliefs. The 62nd Division was replaced by the 47th (2nd London) Division and the Guards by the 59th. On the left the 2nd Division replaced the 36th (Ulster) Division.

To the east in front of the St Quentin Canal, III Corps didn’t have the luxury of replacements and the 12th (Eastern) Division were still holding the front line just behind the village of Banteux. On their right the 55th (West Lancashire) Division of Lieutenant General Snow’s VII Corps looked on with growing anxiety.

The attack on VII Corps

At 0600 hours General Snow was proved correct. Within a dense mist high explosive and gas shells started falling on the 55th Division whose commander Major General Jeudwine had been of a similar opinion about a pending attack as his Corps Commander.

His Division was stretched over a broad front and fairly lightly held. Within the hour distress flares were being fired and their number spread rapidly along the entire 55th Division’s position. The Germans were advancing in small groups with light machine guns and flame-throwers.

The Germans were using new storm-trooper tactics flowing around points of resistance and constantly threatening anything that even looked as though it was going to give.

And give it did. To the west of Vendhuile Sergeant Cyril Gourley of 276th Battery was in action with his howitzers near Little Priel Farm. Despite heavy shelling, machine gun fire, rifle fire and even aircraft attacks the Sergeant and one of his men continued firing into the lines of the advancing Germans. For his action the Sergeant won the Victoria Cross and his position marked the southern limit of the German break in.

To his north, 166th Brigade were having a nightmare of a time between Honnecourt and Villers Guislain. The 1/10th King’s on the right and the 1/5th Loyal North Lancashires in the centre of the brigade were forced back almost two kilometres to the road running south out of Villers Guislain.

In front of that village and holding the Banteux Ravine was the 1/5th South Lancashires who were manning a front of almost two kilometres.

Their left hand Company were simply swept away by the 34th Division who now swung left into Villers Guislain cutting off the Lancashiremen. Hardly a man survived.

Major General Jeudwine didn’t really need to call for reinforcements because VII Corps were soon well aware that the situation was extremely grave.

With the crushing of the VII Corps’s left flank a breach had also been opened into the right flank of III Corps. 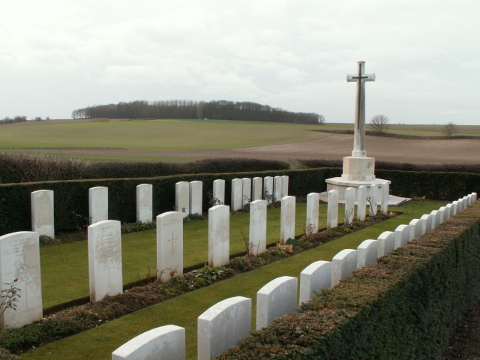 Brigadier General Vincent commanding the 35th Brigade on the right flank of 12th Division had his headquarters near to the Villers Guislain village cemetery. With the immediate loss of all communications he was almost caught napping by the speed of the German advance.

Gathering a small party of men and by now cut off from the rest of his Brigade, Vincent fought a rearguard action to Gauche Wood a kilometre to the west of the village.

He was not the only General to have a close call that morning. To the north of Gauche Wood at the Quentin Mill, Major General de Lisle commanding the 29th Division had to beat a hasty retreat to Gouzeaucourt where he tried to rally engineers, cyclists and anybody else he could get his hands on (including some of the American Railway Engineers) to try and defend the village. 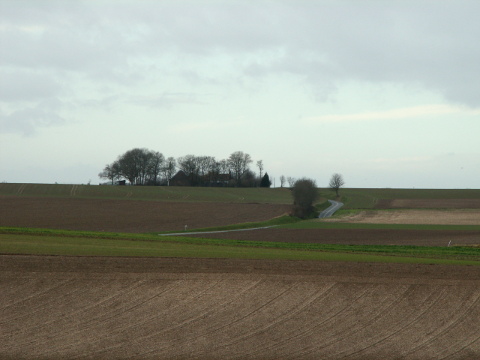 It was an impossible task in the face of the waves of German attackers and the village fell as General de Lisle led his men back to old British trenches to the west.

The American engineers became their army’s First to Fight in the war.

The Germans then stopped to catch their breath and it was just enough for the British to fill up the gaps in their line.

To reach Gouzeaucourt the 34th German Division had crushed its way through very light defences in front of Gonnelieu and although the orders had been rushed out to get the village defended, there was no time to think, let alone act.

The only thing that prevented the Germans from advancing further was the heroic work by the artillerymen behind Gonnelieu. The Field Batteries worked to the last round, firing at point blank into the Germans swarming in and around the houses.

Lieutenant Samuel Wallace of the 12th Division Artillery had two of his guns run out of their pits and with a light crew ran from one gun to the other for the next two hours keeping them firing all the time. By 1030 hours British infantry could be seen arriving from the north so the Lieutenant and his five surviving gunners removed the breech-blocks and retired with their wounded. The Lieutenant received the Victoria Cross and the five gunners the Distinguished Conduct Medal.