Masnières is situated approximately eight kilometres to the south of Cambrai on the D 644 road (The old N 44).

As you come into the town you will see the bronze caribou sitting on the right hand side of the road. It is well sign posted and there is space to park a vehicle. 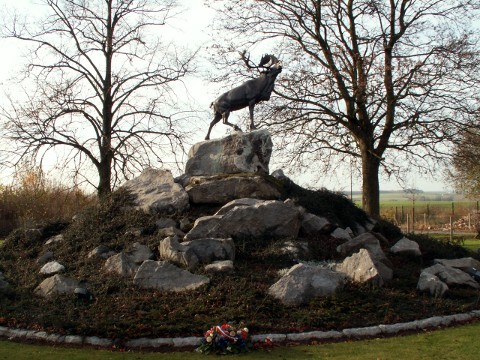 By the beginning of November 1917 the Third Battle of Ypres (Passchendaele) was drawing to a close and Field Marshal Sir Douglas Haig’s concentration turned south towards Cambrai.

Cambrai was to be a different battle — one where tanks would be used en masse as a co-ordinated weapon rather than in the piece meal way that had been used previously.

Over three hundred fighting tanks would smash the Germans’ Hindenburg line, the cavalry would pour through to capture Cambrai and the Allies would be on a roll.

As part of General Byng’s Third Army, the Newfoundland Regiment was preparing to take its part in the assault on the Hindenburg Line in front of Cambrai.

At 0620 hours on 20th November and without a preliminary artillery bombardment the Third Army launched its attack. All went well along the 10 kilometre front with the exception of the area of Flesquières where the 51st (Highland) Division failed to carry out the devised plan for working with the tanks. Elsewhere the German line was pierced to a depth of from five to six kilometres.

The Newfoundland Regiment was part of the second wave of troops and along with the rest of the 29th Division were detailed to mop up any pockets of resistance from the Hindenburg Support Lines. This was always an important task and ensured that no enemy machine gun posts had been left untouched and remained in a position to open fire from behind the advancing units.

Having completed this task the 29th Division moved on towards the bridges over the canals. The Newfoundland’s 88th Brigade being charged with the capture of Masnières.

The Germans put up a strong fight for the town but by nightfall the battalion had taken the town.

Everything looked perfect and church bells in Britain were rung for the first time since the start of the war, but clouds were gathering on the horizon. On the left, Bourlon and its wood remained in German hands — or at least not securely in Allied hands — and this left the remainder of the newly created salient exposed to counter-attack.

This came on 30th November when the German Second Army under General von der Marwitz launched a terrific blow against General Byng’s exposed right flank. Just as the British had been developing skills with tanks, the Germans been working on the idea of using shock troops, or Storm Troopers as we would now call them.

Supported by aircraft, the blow fell on the Newfoundland Regiment and their Brigade who were holding the bridgehead. Their plight became even more desperate when the Germans gained ground to the south of the town and threatened to encircle the Division.

Realising that something had to be done, a spirited counter-attack was launched by all four battalions of the 88th Brigade and forced the Germans back over a kilometre.

The Newfoundland’s Commanding Officer wrote in his diary:

The Brigade continued to hold Masnières for another 24 hours but General Byng ordered them to fall back as he retired to a position which not only gave up much of the conquered territory but in some places more besides.

It is thought that each side lost about 40 000 men but each side had also learnt things about their tactics. The British about tanks and the Germans about Storm Troops. The latter would be used first in the coming year as Ludendorff launched his last gamble – the German Spring Offensive of 1918.

In its struggle to seize and hold the bridgehead at Masnières, coupled with earlier fighting at the Third Battle of Ypres, the Newfoundland Regiment had earned unique recognition. It was granted the title Royal by His Majesty King George V.

No other regiment of the British Army received such an honour during the First World War whilst fighting was still in progress.

The story of the defence of Masnières and of the part which the Newfoundland Battalion played in it is one which, I trust, will never be forgotten on our side of the Atlantic.

The other memorials in Masnières

The Fort Garry Horse
The Battle of Cambrai