Webmatters : Memorial stone to Apollinaire in the Bois de Buttes

The Bois de Buttes is situated between the two villages of Pontavert and La Ville aux Bois lès Pontavert.

Don’t confuse the two Pontavert villages — they are quite separate. In French the word lès (Note the accent) means near to and can be seen in many village names.

The wood sits astride the D 89 from Pontavert and was the scene of fighting by the 2nd Bn Devonshire Regiment in 1918 and whose memorial is in the centre of Ville aux Bois.

Whilst passing through the wood you will notice this memorial stone sign posted in both directions. With the shadows of the trees it is possible to miss it if you are looking for something set back in a clearing rather than sitting right on the side of road. 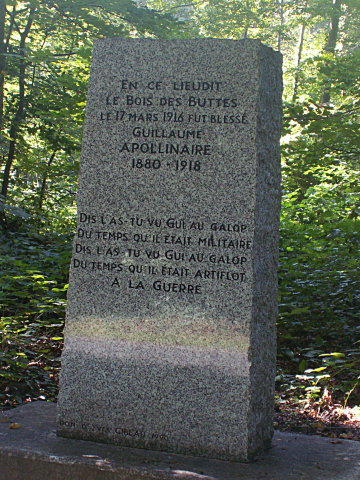 In my travels and reading about the war in French I have come across the name of Guillaume Apollinaire a number of times, but have never really understood a great deal about him or his place in the war.

I cannot claim to be am aficionado of poetry from any nation, so the following outline is to help explain why this memorial is here rather than offer a critique into his works.

Apollinaire was much more than just a poet and I don’t think he could be considered a War Poet in the same way as Wilfred Owen. For him it was more the case that he had lived during the war, but like Owen it would kill him: just days before the Armistice.

Wilhelm Albert Vladimir Apollinaris Kostrowitzky to give him his real name was born in Rome on the 26th August 1880. If he knew who his father was, he kept very quiet about it, though there are a number of theories. His mother Angelica Kostrowitzky was Polish and a gambler and Apollinaire would be brought up in and around casinos such as Monaco.

In 1899, they moved to Paris and the previously known Wilhelm Kostrowitzky found his writing pseudonym: Guillaume Apollinaire.

It was the turn of the century and there was a flourishing art scene in Paris which Apollinaire soon became a part of, making with friends with Picasso, Chagall and Eric Satie amongst others.

Eventually he decided that he wanted to make a living by writing and wrote a number of critiques defending the new waves of art which were flourishing, including cubism.

In 1909, he published his first collection of poems but it was in 1913 with the release of a collection called Alcools that his reputation was made. It is a mix of what I would call standard verse but with images from a modern world thrown in.

Apollinaire had a bit of a reputation (Possibly because he was a foreigner) and in 1911 was arrested on suspicion of stealing statues from the Louvre (they had in fact been taken by a friend of his).

When war broke out he volunteered for the French Army, joining the 38e Régiment d’artillerie de campagne (Field Artillery Regiment) of Nîmes, which was equipped with the famous 75mm soixante-quinze canon. His initial attempt at French naturalisation was turned down.

After a period of training his was sent to the front at Beaumont sur Vesles on 4th April 1915.

As an obviously literate and intelligent soldier he was quickly given command of his own canon. On the 25th September 1915 he participated in the Battle of Champagne during which his friend and fellow writer, Blaise Cendrars would lose his right arm.

Looking for a change he decided to join the infantry and was assigned to the 96e Régiment d’Infanterie whose usual recruiting ground would have been Béziers.

In March 1916 his papers finally came through naturalising him as a French subject and on the 14th his regiment was moved up to the Chemin des Dames.

The area had a reputation for being fairly quiet and the front line had moved very little. Following the Nivelle Offensive in 1917 the area would regain its reputation which was why the 2nd Bn Devonshire Regiment (see link below) were sent here to recuperate from the German offensive of March 1918 on the Somme.

On the 17th March 1916 Apollinaire was sitting in his trench reading the paper when a shell exploded next to him and he was hit in the head by a piece of shrapnel. Although not fatal, the wound was severe enough to force the hospital to carry out a trepan (Making a hole in the skull to help relieve the pressure on the brain).

On the 17th May he was awarded the Croix de Guerre.

For Apollinaire the war was over and he went back to his writings and serial love affairs, one of which resulted in 1918 with his marriage to Jacqueline Kolb.

Now home from the front and recuperating Apollinaire threw himself back into his artistic life style publishing more than ever before and coined the word sur-realist to describe Erik Satie’s ballet Parade.

In April 1918 he published his poems on peace and war called Calligrammes these are written in a style where the typography of the printed word creates a picture as well.

Here is one I prepared earlier !
Apollinaire himself used trees, faces, even the Eiffel Tower

This was a subject that intrigued Apollinaire. He even wrote of typography’s demise as it gave way to film and the record. He may not have been far wrong as we now live in an age of imagery where the news arrives on a screen rather than on printed paper, where a gadget made for spoken communication, has become something that records images, plays music and can even send video (Much to the distress of those of us who simply wanted to buy a portable phone !)

In 1918 the Spanish Flu was spreading across the world (Lt Colonel John McCrea, the author of In Flanders Fields, had succumbed to it in January) and Apollinaire was already severely weakened by his head wound.

On the 9th November 1918, Lieutenant Guillaume Apollinaire died as a result of his injuries complicated by the flu. As a serving soldier who had signed up for the duration he received the designation : Mort pour la France.

Two days later as Wilfred Owen’s mother was hearing of the death of her son, the bells rang out and the war was over.

Apollinaire was laid to rest amongst the great of Père-Lachaise cemetery in Paris on the 13th November.

If you have never been to Père-Lachaise, then the next time you are in Paris put aside half a day and buy a map at the gate because there are hundreds of famous names from Napoleon’s marshals to Edith Piaf ; from Oscar Wilde to Chopin.

Apollinaire was an artistic dynamo and central to the changes of style at the turn of the Twentieth Century. Not just as a poet and writer but as a critic and champion of everything that was new. Although technically not amongst the Surrealist movement he gave us the word and was amongst the first to use striking changes of image.

When man wanted to go faster he invented the wheel, not mechanical legs. Artists needed to free their minds of what was expected.

An extract from : C’est Lou qu’on la nommait — They called her Lou (Calligrammes)

Lou was one of Apollinaire’s former desires though his emotions were never really returned.
In French Lou rhymes with Loup — wolf.

Once, wolves were loyal
Just like little dogs
And soldiers who loved beauties
Remembered with gallantry
To be gentle as the wolf

But today, times are worse
Wolves have turned to tigers
And soldiers and Empires
and Caesars, turned vampires
Are as cruel as Venus

The Memorial stone was donated by the French writer Yves Gibeau on 24th March 1990.

It is positioned close to the place where Apollinaire was wounded on 17th March 1916 and Gibeau chose a portion of a poem “Rêverie” that Apollinaire wrote to Lou in 1915 :

Gibeau was buried, at his own request, in the old village cemetery at Craonne.