A single Commander in Chief

By the end of 1917 it was evident to the German High Command (Though not necessarily to Kaiser Wilhelm II himself) that the entry of the United States into the war on the side of the Allies would mean that eventually the German Army would simply be outnumbered.

Following the treaty of Brest-Litovsk with Lenin’s Russian government on 3rd March 1918 Ludendorff found himself with an extra 700,000 German soldiers for use on the Western Front. Troops that were more accustomed to movement than their counterparts in the trench bound stalemate in the west.

The 2nd Battle of the Somme

The first part : Operation Michael, smashed against the British on the Somme driving them back ever closer towards the all important rail link at Amiens, and so opening the way to Paris.

For a moment there was panic in the air as French and British armies became separated. 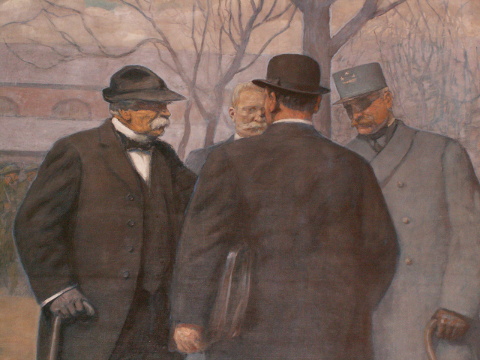 The gathering of the leaders at Doullens

A supreme commander was needed to coordinate the movements of all the Allies. 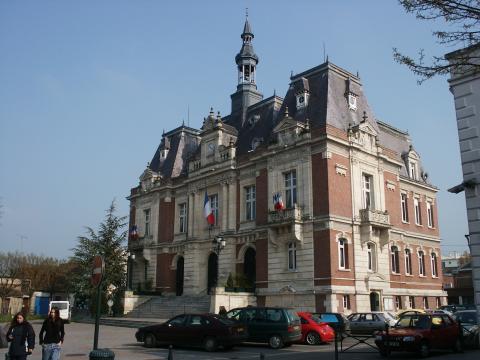 The Hôtel de Ville at Doullens

On 26th March 1918 a meeting was called at the Hôtel de Ville (Town Hall) in Doullens.

Senior political as well as military figures were there from France and Britain, including Field Marshal Haig, Générals Pétain and Foch. The French President, Poincaré presided over the meeting with Lord Milner, the Secretary of State for War, representing the British Government.

The one person who was not present/invited was Sir Hubert Gough whose Fifth Army had been dealt the devastating blow that had led to the crisis.

It became immediately clear that the two GHQs had very different priorities as the British were more interested in defending the coastal ports (their lifeline) whilst the French were intent on protecting Paris, which was now under fire from the German long-range Paris guns. 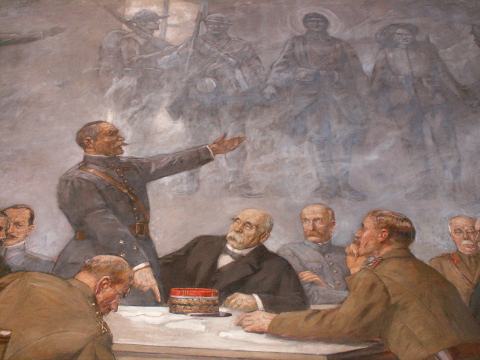 Général Foch explains how Amiens must be held

Eventually it would be Sir Douglas Haig who suggested that he would follow any advice that General Foch would care to give. 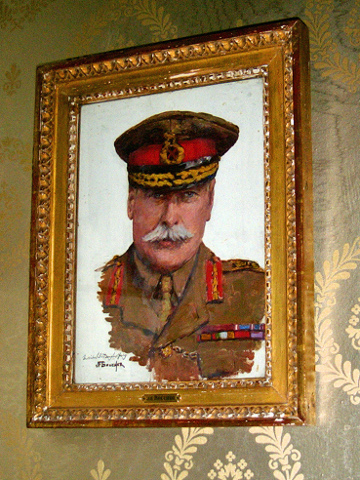 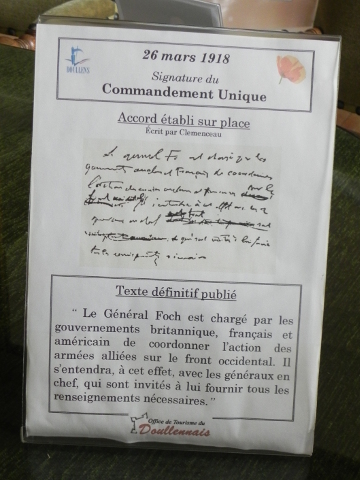 Clemenceau, the French prime Minister, proposed and it was agreed by both parties that Foch would act as an overall commander in chief to ensure that the two Armies collaborated and worked towards the common goal — defeating the German Army.

Foch made it immediately clear that the first thing that had to be undertaken was the defence of Amiens — it would not be lost under any circumstances.

Haig however pointed out that making Foch commander only in the Amiens sector was self defeating, so Clémenceau altered his proposal to include all theatres of war. 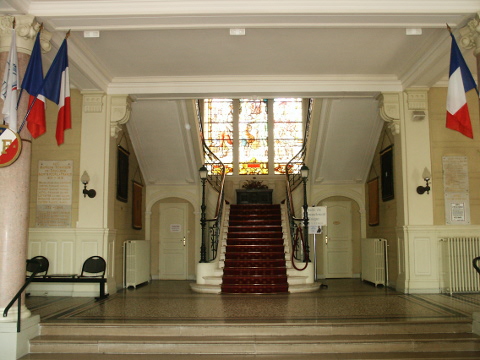 The grand staircase — the conference room is upstairs

As the Fifth Army had ceased to exist General Gough no longer had a command and the manipulations of Sir Henry Wilson (Britain’s Chief of the Imperial General Staff) assured that when a new Fourth Army was reformed Gough would not be there to take charge of it. Instead, he was replaced by Wilson’s old friend Sir Henry Rawlinson whose post at the joint Military Council was now, to all intents, redundant.

In the week following the conference at Doullens the Germans continued to make further gains but they became fewer and fewer as the days progressed. The town of Albert from which the Battle of the Somme had been launched was now in German hands.

During their retreat to the Hindenburg line the previous spring the Germans had laid waste to the land that they were now recapturing. In 1917, they had cut down every tree ; poisoned all the wells ; destroyed livestock. The further they now moved away from their start line the more difficult it became to supply them. However, the rapid retirement of the British had forced them to abandon entire food depots.

Germany was suffering from a blockade and having traversed this self made wasteland, the German infantry came across an El Dorado of food and drink. Earlier on in the offensive one of the Irish regiments swore that the cases of whiskey in their officers mess had halted the German advance long enough for them to make their get away in relative peace.

By the end of March 1918, and following the total failure of Operation Mars against Byng’s Third Army on the 28th, it was clear to Ludendorff that his dream of breaking the British on the Somme had come to nothing.

True, his soldiers had advanced with unbelievable rapidity and yes, they had taken hundreds of square kilometres of territory but nowhere had any of the three armies employed been capable of creating that definitive breach.

Fog and the crushing bombardment had nearly broken Gough’s thinly held and almost non-prepared front but elsewhere, in locations that found the British in prepared positions they had dealt with the assaults in much the same fashion as they had been treated during their own offensives of 1915 through 1917.

In four years of fighting on the Western Front, neither side could claim to have made the devastating breakthrough. Even by the war’s end in November with the German Army being forced to retire, it was still doing so in an orderly manner.

Ludendorff was now forced to try somewhere else and on 9th April 1918 he struck the opening blow against the Portuguese at Richebourg, opening the Battle of the Lys.

The Battle of the Lys

This rather splendid town hall is open during all working days of the year between 10-1230 hours and from 14-1800 hours. Entry is free.

It is well sign posted (Commandement Unique — in French), but parking is difficult. Nowhere though, is more than a few minutes walk away.

The chamber is on the first floor and signs lead the way, note the various memorial plaques in the entrance hall.

There is a small brochure available explaining a little about the history of the chamber.

Around the walls there are a number of paintings and a stained glass window showing scenes from the day.

Portraits of the important figures also adorn the walls.

The table is set and place names indicate who sat where — though I can’t see that they compare with the painting.

In the centre of the table is a copy of the draft order scribbled by Clemenceau (He should have been a doctor with writing like that) making Foch supreme commander. 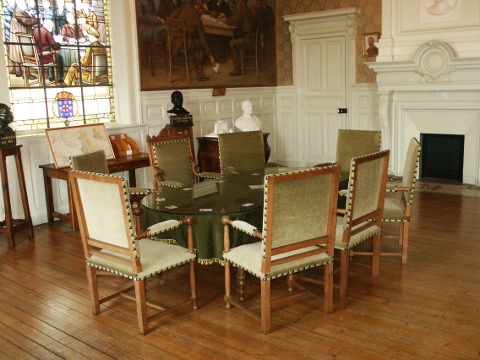 Also to be seen in the town

Doullens is a pleasant small town located on the Authie river. It would be about half an hour away from the battlefields of the Somme or Arras.

The Tourist Office is located in the old Belfry around the corner from the Town Hall.

There is an interesting story as to how the Doullenais stole the bells from Auxi le Château. The case ended up in court in Paris with the rather unusual decision that, as the bells were now in place, Doullens could keep the bells but would have to pay for them.

Near the market place you will find the historic church of St Pierre consecrated by the Archbishop of Canterbury in 1170.

There is a small town war memorial and garden, within walking distance to the left and behind the Market Place.

The XVI century citadel is open for walking and was used by the Canadians as a hospital during the Great War. The Germans considered employing it as the control site for their V1 Blitz on London in 1944.

At the roundabout heading for Arras you will see a sign for the Calvaire Foch which sits high on the hill overlooking the town.

It is situated where the first 240 mm shell fell on the town. You would probably want to drive this one but the view is worth it.

Also near to the roundabout (Direction Amiens) is a small road leading up to the town cemetery and two large CWGC enclosures.