Following the battles of the Somme, Messines and Cambrai the Ulster Division found itself badly under its established strength.

Conscription would never in practice be introduced in Ireland (though it would be decreed, in theory) so local replacements were hard to come by.

Early in 1918 and in line with the general re-organisation of the British Army it was decided to transfer the Regular battalions which recruited in Ulster to the Division. At the same time, many of the weakened UVF Battalions who had formed the core of the Division back in 1916 were disbanded.

Up until this moment the 36th had considered itself a protestant and Unionist force through its recruitment and initial formation.

On the 1st July 1916 every man who had left the trenches believed in the idea that Ulster was British. Before the war the Ulster Volunteer Force had been formed with the intention to fight, if necessary, to remain so. Force of circumstances now demanded changes.

The Regular Army in Ulster drew its soldiers from all walks of life and shades of political opinion.

Of the nine counties of Ulster, three could be considered catholic and would eventually become part of the new Irish Free State. Indeed, of all the battalions of the Royal Irish Fusiliers only the 9th, County Armagh, could be declared : protestant.

There was thus some discontentment on behalf of both parties as the Regulars joined the Division. This would be the last battle that the Division would fight with an obvious Ulster identity. Future drafts of soldiers would come from anywhere they could be found.

The Division’s five kilometre front lent itself well to defence with a series of low ridges and valleys opposite St Quentin. On the first ridge behind the front line were three redoubts : Boadicea (on the left), Racecourse and Jeanne d’Arc. Behind them in the Battle Zone were three more : Ricardo, Quarry and Station.

Like all the Divisions that had been moved into the area there was a lot more work to do than simply build redoubts and dig trenches. Roads and communications systems had to be prepared or improved ; munitions depots established ; everything was labour intensive and the manpower was in short supply.

On the opening day of the German offensive the Battle Zone trenches, in some places, were still only knee deep.

In the right Forward Zone, Captain L Johnston (commanding C Company of the 12th Royal Irish Rifles) and his men held the Germans in a constant succession of vicious hand to hand combats. 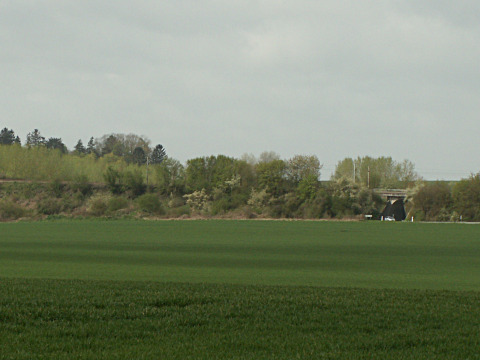 The railway embankment at Grugies

At midday as the fog began to lift Johnston could see that far from holding the front line he was now an isolated pocket. Over a kilometre to his rear he could see the Germans swarming over the Jeanne d’Arc redoubt and the rest of his battalion.

He could also see though, that he was well placed to machine-gun German troops, who seemed to be arriving nonchalantly up the main road from La Fère. Despite the fact that such an act would bring their position to the attention of the Germans the Lewis gunners decimated the arriving columns.

Once, however, the redoubt had fallen the Germans were able to come back to deal with Johnston and his men. The first assaults though went badly for the Germans as they came on too confidently and were mown down for their lack of caution.

Johnston and his soldiers fought on until 1600 hours. With hope of reinforcement gone and the position now hopeless he ordered his men to surrender. He and a hundred, mostly wounded, soldiers would finish the war in captivity. After his release at the end of the war his exploits became public knowledge and Johnston was awarded the Military Cross for his cool conduct and leadership.

Looking out from Racecourse Redoubt

At the village of Grugies, 2nd Lieutenant Edmund de Wind a former soldier in the Canadian Infantry commanded the small garrison at Racecourse Redoubt. 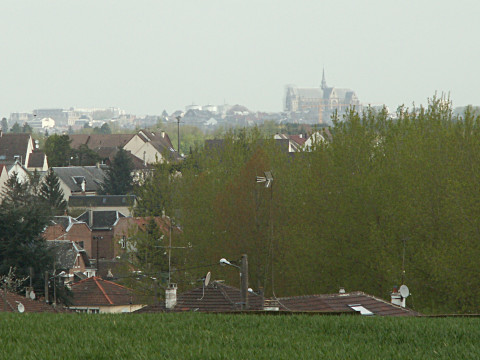 St Quentin in the distance

The Germans were pressing westwards and the redoubt soon came under severe pressure. De Wind and his men held their own until the early afternoon when de Wind was killed. His body was never found and he is commemorated on the Pozières Memorial.

De Wind would be awarded the Victoria Cross for his valour but only after the war had ended and witnesses came home from captivity. He is commemorated in his home town of Comber in County Down, and by Mount de Wind in his adopted Alberta, Canada.

For most conspicuous bravery and self-sacrifice on the 21st March 1918, at the Race Course Redoubt, near Grugies. For seven hours he held this most important post, and though twice wounded and practically single-handed, he maintained his position until another section could be got to his help. On two occasions, with two NCOs only, he got out on top under heavy machine gun and rifle fire, and cleared the enemy out of the trench, killing many. He continued to repel attack after attack until he was mortally wounded and collapsed. His valour, self-sacrifice and example were of the highest order.

This redoubt had the good fortune to escape almost unscathed from the German bombardment. Garrisoned by a company and the Headquarters elements of the 2nd Royal Inniskilling Fusiliers the redoubt blocked the path of the German advance until 1730 hours when it became obvious that it could be held no longer and the Comannding Officer : Lt Colonel Lord Farnham surrendered the battalion.

The Germans found a couple of carrier pigeons in the redoubt and released them with the message that the position had fallen.

The problem for the Ulstermen was the collapse of the 14th (Light) Division’s Forward Zone on their right. That Division had been concentrated too far forward, as opposed to in depth, and had suffered badly during the opening moments of the battle. Their capture and retirement meant that the Ulster’s right flank was becoming dangerously exposed.

Behind the Jeanne d’Arc Redoubt at Station Redoubt the 1st Royal Irish Fusiliers were still holding their own at 1430 hours but to the south the Germans had advanced three kilometres and taken the village of Essigny.

9th Royal Irish Fusiliers, in reserve, were moved to cover the rear of Essigny whilst the 9th Royal Inniskilling Fusiliers were brought over from the left flank to the right to assist Station Redoubt. Following a visit to the Front General Gough allocated the 20th Division from his Reserve to the XVIII Corps and their 61st Brigade came to the assistance of the Ulstermen.

As the 14th Division retired to the Crozat Canal, Major General Nugent, commanding the 36th, ordered it to swing back to form a defensive right flank for XVIII Corps. The key stone to this operation was the 1st Royal Inniskilling Fusiliers at Fontaine les Clercs. Under constant pressure they were forced back to the Ricardo Redoubt (Named after their former Brigade Commander) where they hung on.

They beat off a dozen assaults by the 1st Prussian Guards Division during the morning of the 22nd before being overwhelmed by superior numbers. A Regular Army battalion, the Inniskillings lost nearly a hundred men defending their position and not a man returned to the Brigade that evening. 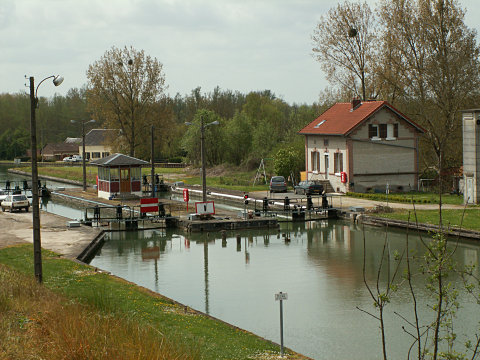 The Canal at Tugny et Pont

It was obviously highly important that any bridges across the canal were destroyed behind the retirement. 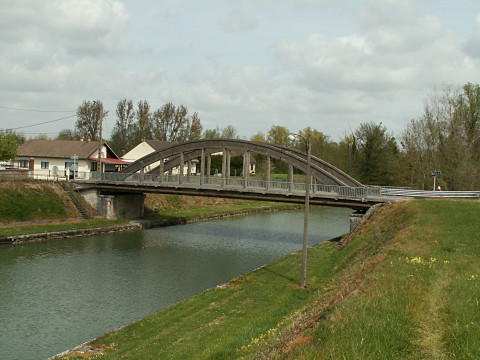 His first charge had failed to fully explode and at the risk of his own life Knox removed the delayed fuse and connected an instantaneous one to the explosives. The bridge went up and despite his proximity to the blast Knox survived and was awarded the Victoria Cross for his valour.

The diary now deals with the movements of the Battalion details which consisted of transport, personnel of quartermaster’s stores, personnel left out of action, other ranks arriving back from leave, from courses and from hospital, together with a draft of 100 other ranks which arrived today. The battalion itself was gone, killed wounded and prisoners. Captain PM Miller MC commanded the little party.
XVIII Corps, northern sector