Pozières is a village 6 kilometres north-east of the town of Albert. The Memorial encloses Pozières British Cemetery which is a little south-west of the village on the north side of the main road, D929, from Albert to Pozières.

On the road frontage is an open arcade terminated by small buildings and broken in the middle by the entrance and gates. Along the sides and the back, stone tablets are fixed in the stone rubble walls bearing the names of the dead grouped under their Regiments.

It should be added that, although the memorial stands in a cemetery of largely Australian graves, it does not bear any Australian names. The Australian soldiers who fell in France and whose graves are not known are commemorated on the National Memorial at Villers-Bretonneux. 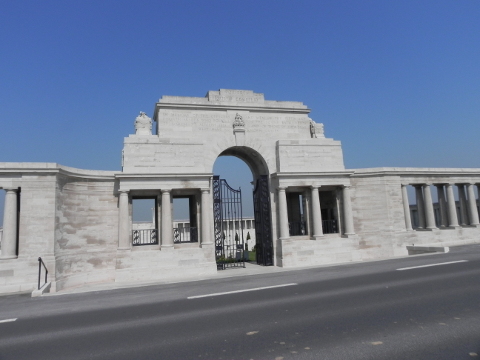 The Pozières Memorial relates to the period of crisis in March and April 1918 when the Allied Fifth Army was driven back by overwhelming numbers across the former Somme battlefields, and the months that followed before the Advance to Victory, which began on 8th August 1918. 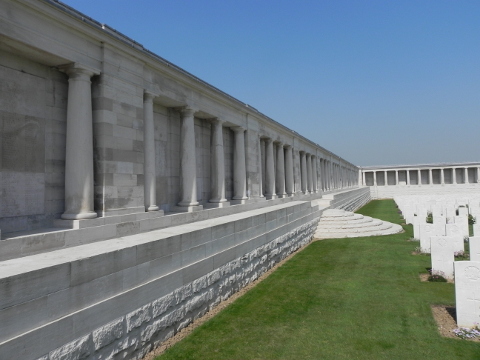 The Memorial commemorates over 14,000 casualties of the United Kingdom and 300 of the South African Forces who have no known grave and who died on the Somme from 21st March to 7th August 1918. The Corps and Regiments most largely represented are The Rifle Brigade with over 600 names, The Durham Light Infantry with approximately 600 names, the Machine Gun Corps with over 500, The Manchester Regiment with approximately 500 and The Royal Horse and Royal Field Artillery with over 400 names.

The memorial encloses Pozières British Cemetery, and there are now 2,758 Commonwealth servicemen buried or commemorated in this cemetery.

The cemetery and memorial were designed by W.H. Cowlishaw, with sculpture by Laurence A. Turner. The memorial was unveiled by Sir Horace Smith-Dorrien on 4th August 1930. 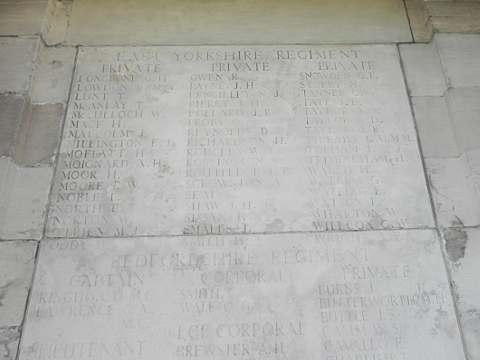 The cemetery is enclosed by the Pozières Memorial

There are three winners of the Victoria Cross recorded on the Memorial. All were obtained at the opening of the German Spring Offensive in 1918.

As you will see, with the passing of time some inscriptions have become barely legible. 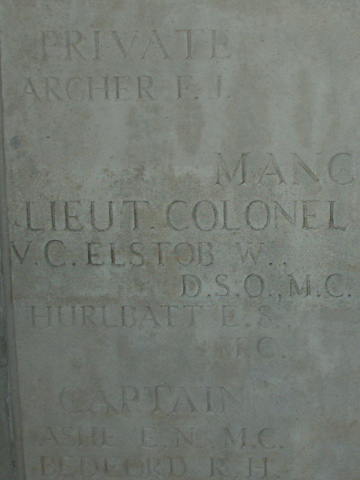 For most conspicuous bravery, devotion to duty and self-sacrifice during operations at Manchester Redoubt, near St. Quentin, on the 21st March 1918. During the preliminary bombardment he encouraged his men in the posts in the Redoubt by frequent visits, and when repeated attacks developed controlled the defence at the points threatened, giving personal support with revolver, rifle and bombs.

Single-handed he repulsed one bombing assault driving back the enemy and inflicting severe casualties. Later, when ammunition was required, he made several journeys under severe fire in order to replenish the supply. Throughout the day Lieutenant-Colonel Elstob, although twice wounded, showed the most fearless disregard of his own safety, and by his encouragement and noble example inspired his command to the fullest degree.

The Manchester Redoubt was surrounded in the first wave of the enemy attack, but by means of the buried cable Lieutenant-Colonel Elstob was able to assure his Brigade Commander that : The Manchester Regiment will defend Manchester Hill to the last.

Sometime after this post was overcome by vastly superior forces, and this very gallant officer was killed in the final assault, having maintained to the end the duty which he had impressed on his men — namely : Here we fight, and here we die. He set throughout the highest example of valour, determination, endurance and fine soldierly bearing. 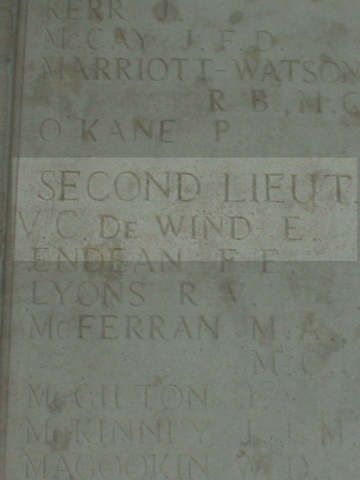 For most conspicuous bravery and self-sacrifice on the 21st March 1918, at the Race Course Redoubt, near Grugies. For seven hours he held this most important post, and though twice wounded and practically single-handed, he maintained his position until another section could be got to his help

On two occasions, with two N.C.O.‘s only, he got out on top under heavy machine gun and rifle fire, and cleared the enemy out of the trench, killing many. He continued to repel attack after attack until he was mortally wounded and collapsed. His valour, self-sacrifice and example were of the highest order.

Mount De Wind in Alberta, Canada was named after him in 1948. 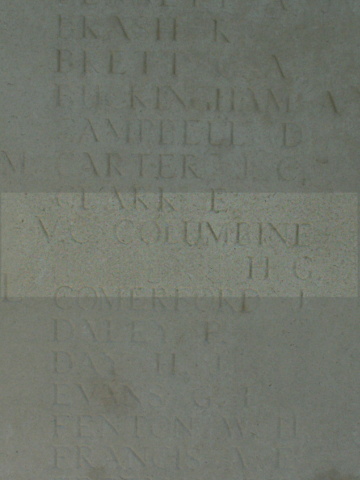 For most conspicuous bravery and self-sacrifice displayed, when, owing to casualties, Private Columbine took over command of a gun and kept it firing from 9 a.m. till 1 p.m. in an isolated position with no wire in front. During this time wave after wave of the enemy failed to get up to him. Owing to his being attacked by a low-flying aeroplane the enemy at last gained a strong footing in the trench on either side. The position being untenable he ordered the two remaining men to get away, and, though being bombed from either side, kept his gun firing and inflicting tremendous losses.

He was eventually killed by a bomb which blew up him and his gun. He showed throughout the highest valour, determination and self-sacrifice.