Webmatters : The battle of the Somme: Mouquet Farm 1916

If you approach Thiepval from the village of Pozières you will come past Mouquet Farm on a rise to your right. The farm has been rebuilt since 1916 when it was completely destroyed in the fighting which raged there for weeks.

At the entrance to the lane leading up to the farm you will see one of the bronze plaques commemorating the fact that this was the scene of fierce fighting by the Australians. There are a number of these throughout the world wherever Australia’s servicemen have served with distinction.

Known to the British soldiers as Mucky Farm and to the Australians as Moo-Cow Farm, this was a heavily fortified position on the German’s second line of defence in July 1916. This line ran from Pozières to Grandcourt around the rear of the Schwaben Redoubt in a system of strong points: the Goat and Stuff redoubts.

Mouquet Farm was connected through to the Schwaben Redoubt via a system of trenches known as The Mouquet Switch.

The original plan for Fourth Army called for this second line of defences to be taken within hours of the initial attack at 0730 hours on the 1st July.

For a moment that day a party of men from 13th Bn Royal Irish Rifles managed to get within half a kilometre of Mouquet Farm, but the inability of their own Division (The 36th Ulster) to reinforce them and the failure of 32nd Division to capture Thiepval village, rendered their position untenable and they were forced to retire.

By the final weeks of August 1916 any possible advantage that had been gained by the French and British to the east of Pozières was being severely hampered by the fact that Thiepval continued to hold out.

The key to Thiepval was Mouquet Farm. If the British could take it then Thiepval would become isolated.

However, before Mouquet Farm could be taken it would be necessary to capture the village of Pozières on the main road to its right.

Once Pozières had fallen a renewed attempt could be made to capture Mouquet Farm. The attack was set for the evening of 8th August with the British 12th Division attacking on the left and the 15th Battalion from 4th Australian Division on the right.

The Australians made good progress but the 12th Division faltered. Things got worse when 12th Division realised that they had actually missed one of the German emplacements in their advance and were now being attacked on all sides.

By daylight they had withdrawn leaving the Australians in a captured forward line. In the confusion the Australians found themselves being shelled by the allied guns and were forced to retire.

The following night at 0005 hours the 16th Battalion AIF advanced up past the trenches taken the night before (which the 15th Battalion promptly reoccupied). Over the next couple of days there was a period of consolidating the ground they had taken, before the attack could be pressed on towards Mouquet Farm.

On the morning of 11th August the Germans began a bombardment of the Australians’ front line which went on into the afternoon.

The farm garrison made a sortie which was broken up by a mixture of machine gun fire from the 13th and 16th Battalions AIF and an artillery bombardment. Unfortunately the 16th was paying a heavy price in casualties of its own and had to be removed from the line on the 12th August — still being hit by shellfire. 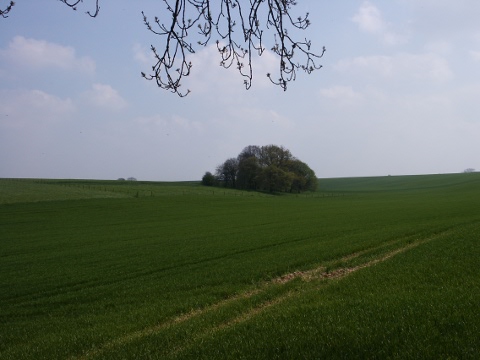 The quarry is today hidden by a clump of trees

The Australians had by now managed to get up close to the farm and taken the points that had eluded the 12th Division earlier in the week. Their next objective was to reach the quarry which would necessitate an attack over 300 metres of open territory directly in front of the farm.

The edge of the quarry was reached by 50th Battalion and further preparations were made with a view to capturing the farm. As a frontal assault was likely to prove impossible given the strength
of the fortifications, the Australians decided that they would drive on past the right of the farm into a trench system called the Fabeck Graben.

This was named after the local German commander: Major von Fabeck, who had been responsible for fortifying the entire area around Thiepval.

To the left of the Australians ran a trench named the Constance Trench which ran down the lane from the farm. Standing at the AIF Plaque looking towards today’s farm the Australians were attacking from your right.

The attack was launched on the 14th August with mixed results. In the centre the 13th Battalion managed to make progress but either side of them the attacks were turned back by machine gun fire, and by the end of the day they had been forced to retire.

The 4th Division had suffered over 4,600 casualties in the space of ten days and were now relieved by the 1st Australian Division who had played an important part in the capture of Pozières
in the preceding weeks.