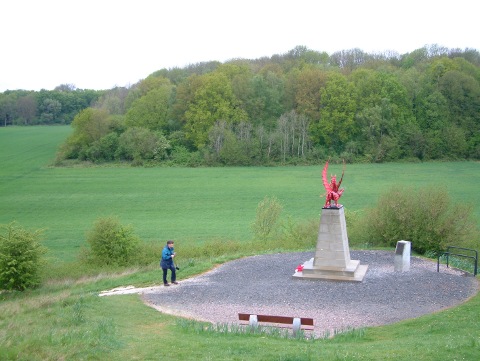 On 5th July the 7th Division who had advanced the line through Mametz were relieved by the 38th (Welsh) Division.

Because of the shape of Mametz Wood the right hand section, which the 38th now found themselves opposite, was known as The Hammerhead.

Looking down on it today from the Welsh Dragon Memorial you can see just how large this wood is — the largest on the Somme Battlefield.

The 17th Division were attacking the wood from the south-west and the 38th from the east. This entailed crossing the valley which went by two names: Happy Valley and Death Valley. The latter strikes me as being the more apt as the attack would have to be made across enfilading fire from the German machine gun positions at Flatiron Copse to the Division’s right.

The capture of Mametz Wood was to be the responsibility of the 38th Division supported by the 17th Division coming in on their left. In the wood was the Lehr Regiment of the Prussian Guard — well trained and determined.

The plan for the attack on 7th July was for the 17th Division to attack Acid Drop Copse and the left hand side of the wood. The 38th Division would attack the Hammerhead.

Bde General Evans of the 115th Brigade (38th Division) felt that it was only possible to attack on a front of a single battalion and nominated the 16th Bn Welsh Regiment. Concerns were raised though and in the end the 16th Welsh went into battle with the 11th Bn SWB (South Wales Borderers) on their left.

The deployment was going to pack an awful lot of men into a front only 450 metres wide. A duck shoot for the German machine gunners in front and to the right.

To alleviate the problem a smoke screen was to be put down prior to the attack.

The timing of the attack was critical and the 38th wanted it to be at first light to give their men cover from Flatiron Copse. The 17th needed more time to prepare and the attack was eventually set for 0830 hours on 7th July 1916.

At Zero, the 16th Welsh and 11th SWB climbed out of their trenches and immediately came under fire from the German machine guns in Flatiron Copse. 200 metres short of Mametz Wood their casualties were so bad they were forced back.

Reinforcements arrived in the form of the 10th Bn SWB but further attacks on the wood proved to be costly failures and the assault was called off to allow the Division to reform and review its plans.

The three battalions had suffered over 400 casualties in an unsuccessful day of fighting. The enfilading fire from the machine guns been made worse following the failure of a planned coverinig smoke screen.

The 17th Division had fared no better but it was upon the 38th Division that Douglas Haig poured his scorn — a stain that was to be a year in the removing. The commander of the Division: Major General Phillips was sacked and replaced by Major General Watts.