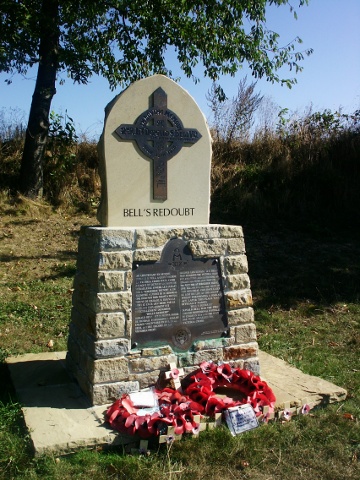 This memorial, on the Mametz road out of Contalmaison, was unveiled on Sunday 9 July 2000, the day before the 84th anniversary of Bell’s death a few metres from where the memorial stands.

Donald Simpson Bell was born in Harrogate, Yorkshire on the 3 December 1890. He went on to study at Westminster College, Oxford where he showed himself to be a great athlete playing rugby, cricket and football.

Taking up a teaching post in Harrogate he continued to play amateur football and was approached by Bradford Park Avenue FC and asked to play for them as a professional.

This by the way is a different team to the modern Bradford City FC — The Avenue still exist in their own right.

I haven’t found what out what they paid him but it must have been an improvement on the £ 2.50 per week he was getting as a teacher.

He made his début against Wolverhampton Wanderers (Wolves) on 13 April 1913 and went on to make five league appearances for Bradford before the outbreak of the war in August 1914.

Within weeks of war breaking out Bell sought to be released from his contract and joined the West Yorkshire Regiment, becoming the first professional footballer to enlist.

With his education and physical prowess Bell soon rose through the ranks and was commissioned as a 2nd Lieutenant into the 9th Battalion The Yorkshire Regiment (The Green Howards) in June 1915.

At the end of June 1916 the 9th Green Howards were in France to take part in the Battle of the Somme.

At 1800 hours on the 5th of July the 8th and 9th Battalions of the Green Howards were ordered to capture Horseshoe Trench, which stood on high ground between La Boisselle and Mametz. As soon as they had left their trenches a German machine gun position began to enfilade the 9th Battalion causing serious casualties and halting the advance.

On his own initiative, Bell and two of his men made their way up one of the communication trenches toward the gun. Once they were as close as they could get Bell made a dash for it over the open ground, moving with speed and agility he surprised the machine gun crew. He shot the gunner with his revolver and blew up the remainder with his Mills bombs.

The citation for his Victoria Cross was published on 9th September 1916:

For most conspicuous bravery. During an attack a very heavy enfilade fire was opened on the attacking company by a hostile machine gun. 2nd Lt. Bell immediately, and on his own initiative, crept up a communication trench and then, followed by Cpl. Colwill and Pte Batey, rushed across the open under very heavy fire and attacked the machine gun, shooting the gunner with his revolver and destroying the gun and personnel with bombs.

Five days later on 10th July Donald Bell and his bombing party were attached to the 8th Battalion who were preparing to assault the village of Contalmaison with the 9th Battalion on their left.

This was done and a number of German prisoners were taken together with 6 badly needed machine guns. The two battalions now found that they did not have enough men to properly defend the village from the inevitable counter attacks. A defensive line was thrown up and at 1930 hours the Germans made the first of two counter attacks, which was repulsed by men from the 8th Battalion using the captured German machine guns.

At about 2100 hours the Germans made a second attack, this time from the southern end of the village. A barricade was thrown up against the oncoming Germans who began to seriously threaten the newly captured position.

It was at this point that Donald Bell led his bombing party past the barricades to drive the attackers back. The Germans were driven off but Bell was killed in the action.

A wooden cross with a surrounding railing was erected by the battalion at the spot where he was killed.

He was a great example, given at a time it was most needed, and in his honour, the spot where he lies and which is now a redoubt, has been officially named: Bell’s Redoubt. He is a great loss to the Battalion and also to me personally, and I consider him one of the finest officers I have ever seen.

Initially buried near the memorial, his body was later transferred to Gordon Dump Cemetery on the La Boisselle to Contalmaison Road. The cross on the memorial is a replica of the carved wooden one placed on his original grave.

The inscription on the memorial is in English and French:

Second Lieutenant D S Bell was awarded the Victoria Cross for attacking and destroying an enemy machine gun post on 5th July 1916 at Horseshoe Trench one kilometre to the west of this memorial. Five days later he lost his life at this location whilst performing a similar act, later this place was named Bells Redoubt. Donald Bell was the first English professional footballer to enlist in 1914 and the only one to be awarded the Victoria Cross.

In the village of Contalmaison you will find a cairn erected next to the church in commemoration of the 15th and 16th Royal Scots, the latter being one of the footballing battalions. Amongst its ranks was the entire Hearts of Midlothian team.