The 36th (Ulster) Division held a position which straddled the Ancre River. Most of the battalions were on the eastern bank but across the river and readying themselves for the attack on Beaucourt were two battalions from the 108th Brigade.

The Battle for Beaucourt: July 1916

The majority of the Division were drawn up along a line which ran along the face of Thiepval Wood. On modern maps it is now marked as Authuille Wood, but I shall ignore that for the moment!

Although described as a wood there was little left apart from stumps and shell blasted trunks.

In front of them was the Schwaben Redoubt, one of a number of heavily fortified positions along this sector of the German line. This was one of the areas that General Haig had insisted that more than just a bite and hold operation took place and for this reason the plan was that the reserve Brigade (107th Brigade) would follow through the leading Brigades to sweep on deeper into the German position. 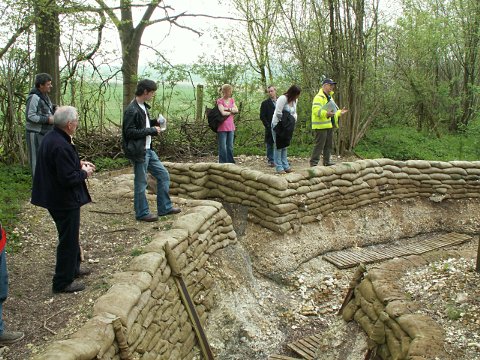 It was the initial task of 109th Brigade to take the Schwaben Redoubt by means of a direct frontal assault.

Behind them, sheltering in the wood was 107th Brigade made up from four battalions of the Royal Irish Rifles: the 8th, 9th, 10th and 15th.

They would come up through the first two Brigades pushing on towards Grandcourt.

The preparatory bombardment along this stretch of the front line appeared to have worked well and the wire entanglements seemed to have been cut sufficiently to allow the infantry attack to proceed almost unhindered – after all, the theory went, all the Germans would either be dead or so shell shocked that they would be incapable of resistance.

By a quirk of fate (the weather was foul) the attack which had been planned for the 29th June 1916 had been postponed to the 1st July 1916. In the old calendar, this was the Ulstermen’s anniversary of the Battle of the Boyne in 1690. Here was a chance for the men from County Fermanagh serving in the battalions of the Inniskillings to repeat the deeds of their ancestors who had played a pivotal part in the victory on the banks of another river. Hymns were sung and in some cases Orange Sashes worn.

Saturday 1st July 1916 dawned a fine summers day with birds singing in the air. It was not going to be mud that the men were going to have to cope with but heat, as they carried their 25 kilos of kit at a walking pace across no-man’s land.

Ten mines were detonated along the British front that Saturday morning, nine of them at 0728 hours, just two minutes before the bombardment stopped and the men went over the top.

Over on the other side of the Ancre the decision was made by 29th Division to detonate the mine under Hawthorn Ridge at 0720 hours to allow it to be more easily captured. It was a disaster. The Germans had a ten minute head start on the main British attack and the entire attack withered away under machine gun fire.

There was a knock on effect for the Ulstermen. Because their compatriots could not advance towards Beaucourt, the German machine gun crews were able to turn their attention to the main body of the 36th Division across the valley.