On 1st July 1916 the Battle of the Somme was opened. The Allied line ran from north to south until just crossing the Albert to Bapaume Road at La Boisselle. Here at the small village of Fricourt the line turned east running under the village and on towards Mametz.

It would be the responsibility of the 7th Division on the right to capture Mametz. On the left the 34th Division would assault La Boisselle.

The plan was similar and co-ordinated with that at Mametz. A direct assault would not be launched on the village of Fricourt, which was known to have been fortified. An initial attack would sweep around the village, cutting the defenders off. This would be mounted at Zero: 0730 hours.

Once Fricourt and Mametz had been surrounded a second combined assault would then be mounted at about 1430 hours to penetrate the two villages.

From the Albert-Bapaume Road running south, the Brigades in 21st Division were the 64th, 63rd and 50th Brigade attached from 17th (Northern) Division. 62nd Brigade were in reserve.

The northern Brigade in the Division consisted of the 9th and 10th Kings Own Yorkshire Light Infantry (KOYLI) in the front line, with the 15th Bn Durham Light Infantry (DLI) and 1st Bn East Yorkshire Regiment in reserve.

Prior to Zero Hour (0730) the men from the KOYLI battalions crawled out into no man’s land in readiness for their assault. In front of them the German wire had been well cut by the week long artillery bombardment and both battalions made swift progress through the German’s front line trenches.

Within 30 minutes they had secured an area around the north of Fricourt village as far as the road to Contalmaison. Here they were held by machine gun fire coming from their front and flanks, and dug in.

To their left the 34th Division’s attempt at taking La Boisselle had been repulsed with enormous loss to its Tyneside Brigades. As the 34th Division attempted to remedy the situation the KOYLI found themselves in the unenviable situation of maintaining a position surrounded on three sides.

The 8th Bn Somerset Light Infantry (SLI) on the right of the two KOYLI battalions came under very heavy machine gun fire from the moment they left their trenches. They battled on through the German front line system but could not advance as far as the Yorkshiremen.

It was a similar story to their right where the 4th Bn Middlesex Regiment were cut to pieces by machine gun fire before they had even managed to take position in no-man’s land. By Zero they had been forced to retire to their trenches and regroup before attempting a second assault. This was again met by a hail of fire and although the survivors pressed on they had ceased to be an effective force.

As soon as it was realised that both the 8th SLI and the 4th Middlesex had been beaten back with severe losses, the two Brigade reserve battalions were ordered forward: 8th Bn Lincolnshire Regiment and the 10th Bn York & Lancaster. They suffered a similar fate to their other battalions but the survivors pressed on to the main road, near where the German Cemetery lies today.

At the southern end of the sector it was 50th Brigade’s task to work in conjunction with the 7th Division. Mines would be detonated under the German lines to help protect an attack made by the 10th West Yorkshire Regiment on the northern tip of the village in preparation for the second phase of the battle. 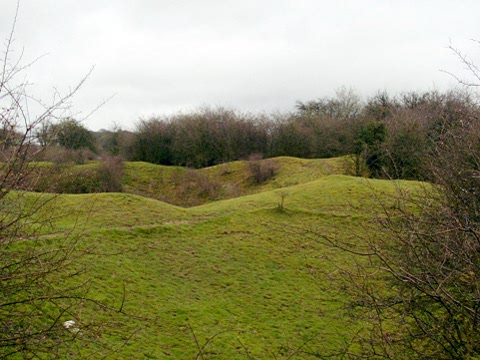 At the designated second the 7th Green Howards and 20th Bn Manchester Regiment(7th Division) would assault the village.

At 0728 hours three mines amounting to 49,000 pounds of explosive were detonated at the Tambour immediately to the right of 10th West Yorkshire. Their War Diary records:

At 7.30 am The Battn took part in the grand assault. On the right were the 7th Divn & on the left the 21st Divn. The Battn assaulted in 4 lines. 2 lines got through the German Position to the 4th lines and were cut off, the attack on our left having failed. Casualties were very heavy. Chiefly caused by Machine Guns which enfiladed our left flanks & were so deadly that the 3rd and 4th lines failed to get across no-man’s land. 22 Officer casualties including Cmdg and Major J Knott 2nd in command (both Killed) & approximately 750 ORs. The Battn was then withdrawn to VILLE.

The casualties suffered by the 10th West Yorkshire were the highest in the British Army for a single day throughout the war. The final casualty figures were officially recorded as 22 Officers and 688 other ranks. 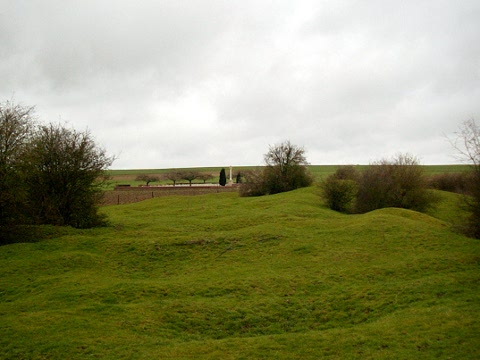 The Tambour Craters, behind them the area
crossed by 10th Bn West Yorkshire Regiment

When you think about the fact that 10% of the unit was held back as a rebuild the unit suffered almost 95% casualties from those who actually went over the top.

Many of them, including Lt Col Dickson are buried in Point 110 New Cemetery just behind the Tambour Position.

Although they were supposed to sit out the morning’s events, for some reason Major Ralph Kent the officer in command of ‘A’ Company decided to lead his men into the attack at 0745 hours.

This was completely contrary to the plan, and led to the destruction of his company by machine gun fire within minutes. He himself was badly wounded.

The Battalion War Diary rather glosses over the matter, giving no reason for the attack. It also, rather interestingly to my mind, never even mentions Kent by name.

Kent was later promoted to Lt Col of 4th Green Howards and was killed in action on 27th May 1918. He is commemorated on the Soissons Memorial.

Part 2: The Assault on Fricourt