Despite all the problems that had beset the XV Corps during the morning, some gains had been made across the Fricourt-Mametz front and the word coming in from III Corps to the north at La Boisselle was of enormous gains. The Germans were in retreat.

With this in mind General Horne of XV Corps ordered the second phase of his battle plan the assault on Fricourt Village with the 50th Brigade (on loan from the 17th Division).

At 1400 hours a 30 minute bombardment was opened on the German positions which the War Diary of the 7th Bn Green Howards describes as feeble.

In a mirror copy of the morning attack and the assault by the Green Howards on their right, the Yorkshiremen were hit by murderous fire from the village and were forced back across no-man’s land.

The three remaining companies of the battalion were set a hard task following the failure of the morning attack by 10th West Yorkshire to secure a covering position for their flank. As their ill fated ‘A’ Company had found to its cost seven hours earlier, the village was well held with machine guns covering all of the routes that they were going to have to attack along.

At 1430 hours and exactly to plan, the Battalion got out of its trenches and advanced towards the village. Within three minutes more than 300 of them were casualties as they were mown down and brought to a standstill. They had not even managed to get across no-man’ s land.

During the morning the remainder of 7th Division had been pushing on and around Mametz. The 20th Manchesters were now going to attack up between Mametz on their right and Fricourt on their left. This route would take them up the Mametz Valley and along the right of Fricourt Wood.

In front of them was the Sunken Road trench. The Manchesters would be attacking with the aid of two companies and the bombers of the 1st Bn Royal Welch Fusiliers.

Up on the hillside behind the Manchester’s position was the poet Lieutenant Siegfried Sassoon who was serving with A Company 1st Bn RWF.

The Manchesters were attacking around a wood known at the time as the Bois Français and shown on maps today as the Bois d’Engremont. A & B Companies attacked on the village side with D Company swinging around to the east on the Mametz side.

They succeeded in occupying the Sunken Road trench along their entire front. A Company of 20th Manchesters and the bombers forced their way into the Orchard Alley trench but they were beaten off by heavy machine gun and shell fire.

By nightfall, although their sister battalions, the 21st and 22nd Manchesters had helped storm and take Mametz to the east, 20th Manchester were still occupying the German front line after an advance of only 150 metres or so. 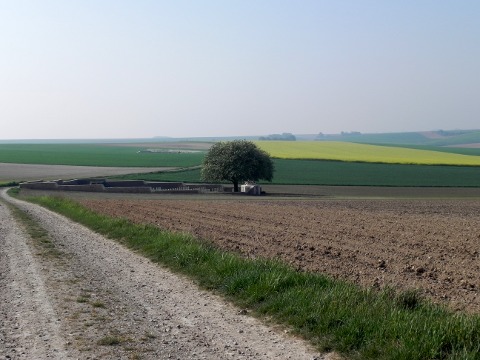 Many of those who attacked Fricourt Village that afternoon are buried in these two cemeteries.

Point 110 Old is sited near where Maple Redoubt was situated.

By the end of the 1st July the situation in XV Corps’ area was that Mametz had fallen, the north of Fricourt had been taken but attempts to take the village by direct assault had all failed.

A further assault by A & B Companies of the 7th E Yorkshire plus 6th Dorsets was considered and rejected. During the night the battered 50th Brigade was relieved by the 51st Brigade. Meanwhile the 7th Division had sent up patrols from the south into the village. These found the village deserted, but still the 21st Division did not move.

On 2nd July, the 17th (Northern) Division moved into the village and XV Corps now moved on towards Mametz Wood. 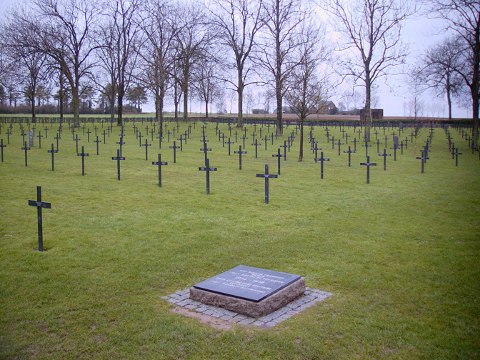 Whilst in the village head out towards Contalmaison and you will pass the German cemetery, which with its sombre tones is very different to those of the Allies.