Fricourt is a village in the Department of the Somme, approximately 5 kilometres east of Albert. Fricourt British Cemetery (Bray Road) is just south of the village, on the right hand side of the road to Bray-sur-Somme and on the north bank of a small stream.

The memorial is located inside the cemetery in which over ninety men of the 7th Battalion are buried.

In 1744, during the Wars of the Austrian Succession, the Colonel was the Hon. Charles Howard and thus the Regiment was known as “Howard’s Regiment”.
However to avoid confusion with another “Howard’s Regiment” allusion was made to the green facings of their red tunics. The Green Howards were born. When the British Army was reorganised on a county basis, the nickname for the Yorkshire Regiment not only stuck but became their official title in 1920.

The 7th (S) Battalion of the Regiment was raised at Richmond in September 1914 as part of the second batch of Kitchener’s Volunteers (K2) and attached to 50th Brigade, 17th (Northern) Division.

They arrived in France on 14th July 1915 and were transferred to the front near Ieper to learn the art of trench warfare. They were then transferred to France and the Somme.

Like so many of Kitchener’s Volunteers the Battle of the Somme on 1st July 1916 was to be their first major action.

On the opening day it was the responsibility of the 21st Division assisted by the 17th (Northern) Division to capture the village of Fricourt. A direct assault would not be launched on the village, as it was known to have been heavily fortified.

An initial attack would sweep around the village, cutting the defenders off.

Once this had occurred, 50th Brigade would assault Fricourt.

Although they were supposed to sit out the morning’s events, for some reason Major Ralph Kent the officer in command of ‘A’ Company 7th Green Howards decided to lead his men into the attack at 0745 hours (Fifteen minutes after the first waves Zero hour).

This was completely contrary to the plan, and led to the destruction of his company by machine gun fire within minutes. He himself was badly wounded.

At 1430 hours that afternoon and exactly to plan, the remainder of the Battalion got out of its trenches and advanced towards the village. Within three minutes more than 300 of them were casualties as they were mown down and brought to a standstill. They had not even managed to get across no-man’ s land.

The monument to the 7th Bn Green Howards (Yorkshire Regt) 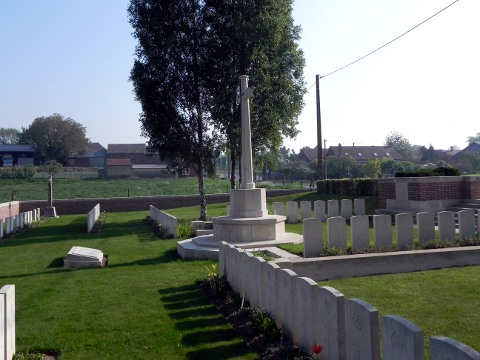 The monument commemorates the men of the 7th Battalion who were killed on 1st July 1916, or who subsequently died of their wounds, in the opening of the Battle of the Somme.

On the front of the base the cross is dedicated:

To the glory of God and in undying memory of the officers, non-commissioned officers and men of the 7th Battalion Alexandra Princess of Wales’ Own Yorkshire Regiment Green Howards who fell near this place 1st July 1916.

Around its sides are engraved the names of 117 of the men from the Battalion who died that day. 89 of them are buried within the cemetery. There are some differences between the details recorded at the time and those compiled at a later date.

There are also other burials from the Battalion from dates other than the 1st July 1916.