By the 7th July 1916 the southern half of the British sector on the Somme Battlefield had managed to advance to a line that ran slightly south-east from the horizontal out of La Boisselle.

It skirted underneath Mametz Wood over the top of the village of Montauban and then downwards on the eastern side of Bernafay Wood to where it met the French 39e Division d’Infanterie (39th Division) of Général Fayolle’s 6e armée.

For ease in distinguishing units they are given in their own language. In French the – e – (often written as è) is the equivalent of -th etc. Thus: 39e / 39th.

Having taken Bernafay Wood the British XIII Corps (Commanded by Lt General Sir William Congreve VC) were now faced by another: Trônes Wood, which was under observation from the German Second Position running from Longueval to Guillemont.

The attack had to be coordinated between the two armies and required the British to attempt to gain the southern tip of Trônes Wood as a preliminary to the assault on a German position known as the Maltz Horn Trench which ran from the wood due south and then south-west and around the hill on which sat Maltzkorn Farm. 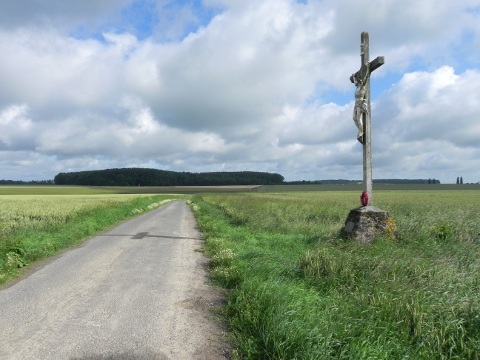 The farm was named after the family founder Paulus Maltzkorn who had been born in Cologne in 1774, had served with the French and married a local girl, Marie-Anne Colombier.

The change in spelling by the Military may have stemmed from a wish to make it sound less German. Regardless of spelling the farm was completely destroyed in the fighting and a calvaire (crucifix) was erected by the family on the former site.

At 0800 hours on the 8th July 1916 the 30th Division began its advance out of Bernafay Wood and up the slight rise between the two woods. As they did so they were halted by two field guns firing over open sites (they were that close) and machine gun fire from the wood’s defenders.

At 1005 hours the French 39e DI began its attack on the Maltz Horn Trench (The reason they had started later was because they were already much closer to the German line). They quickly succeeded in taking their objective but were now exposed on their left flank by the failure of the 30th Division.

Lt General Congreve ordered the 30th Division to try again, telling them to use the entire Division if necessary to bring themselves alongside the French and shortly after midday a company from the 2nd Bn Wiltshire Regiment managed by means of a sunken road to get into the Maltz Horn Trench and, with the French, pincered the Germans out of it. 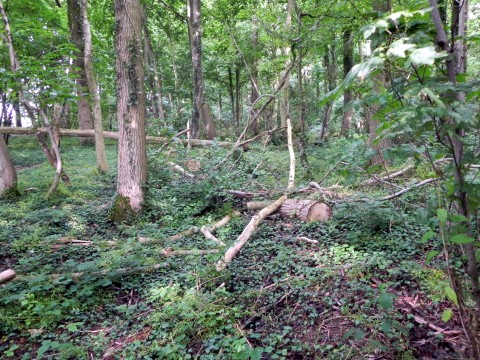 The wood today; still a tangle of trees and undergrowth

About 1300 hours the rest of the 2nd Wiltshire once again attacked the southern end of Trônes Wood battling their way through a mixture of dense undergrowth (because nobody had been tending the forest) and trees falling from the shelling. They managed to secure the south-eastern tip and dug in facing the northwards and the remaining German defenders.

General Haig had discussed the next phase of the battle with General Sir Henry Rawlinson commanding the Fourth Army, and both were agreed that before the line between Bazentin and Longueval could be attacked Trônes Wood had to be taken (together with Mametz Wood and Contalmaison).

At 0300 hours the 2nd Bn Royal Scots Fusiliers of 90th Brigade took the same sunken road out towards Maltz Horn Trench and from there rushed the ruins of Maltz Horn Farm before digging in on the western slope of the hill. They also succeeded in bombing there way up the trench as far as its junction with the Guillemont Road.

In Trônes Wood the 17th Bn Manchester Regiment were hampered by a gas shelling which had forced them to wear gas masks in the rain as they battled through the undergrowth, nevertheless by 0800 hours the wood was theirs and they had linked up with the Scots.

The success was not long lived because by early afternoon the Germans were pouring artillery fire into the wood from all their available batteries between Bazentin and Maurepas forcing the Manchesters to retire to Bernafay Wood. When, at 1530 hours, the Germans launched a counter attack they succeeded in getting through the wood but were beaten off elsewhere by the Royal Scots Fusiliers and the company of the 18th Bn Manchester Regiment who were holding the south-east tip of Trônes Wood. 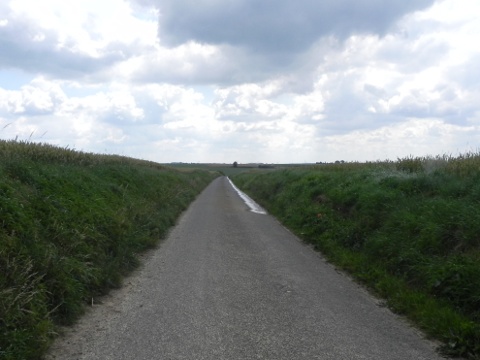 The sunken road leading towards Hardecourt

At 1840 hours the 16th Bn Manchester Regiment were ordered forward from the brickworks just south of Bernafay Wood and at the head of the sunken road.

Sunken roads are a feature across much of the French countryside where the fields either side are higher than the road. They invariably offered shelter from view and often became important parts of the battlefield landscape. It is important not to become confused between them; this one has nothing to do with the famously filmed sunken road at Beaumont Hamel for example.

They encountered little in the way of opposition as they linked with the Scots in Maltz Horn Trench and because sniper fire was causing some problems they dug in just outside the boundary of the wood. Patrols sent out during the night found the wood to be empty of enemy but an attempt by the battalion to reoccupy it was met by German units and by morning the only portion held by the British was their original conquest in the south-eastern corner.

After a quiet day on the 10th July the 89th Brigade took over the front line with the 20th Bn King’s Regiment relieving the Royal Scots Fusiliers in the Maltz Horn Trench at 0100 hours on the 11th July.

Most of the day continued in attack and counter attack in the wood. In the morning the 2nd Bn Bedfordshire Regiment managed to take most of the wood but at lunchtime the Germans forced them back out of the northern half. A larger scale German counter attack was badly disrupted by British and French artillery fire after the orders for the attack were found on an officer captured by the French.

On the 12th July engineers were sent into the wood and began the arduous task with the King’s of digging and wiring a new trench across the wood linking them to the Bedfordshire battalion.

By now the decision had been taken at High Command that the next major phase was to take place on the 14th July and it became imperative that Trônes Wood was taken and XIII Corps was given until midnight on the 13th/14th to get it done.

With the 30th Division worn out from five days of hard fighting the 18th (Eastern) Division was brought back into the line just before dawn on 13th July.

The 55th Brigade took over the positions in Trônes Wood and along Maltz Horn Trench with the intention of attacking at 1900 hours that night following a two hour bombardment. Unfortunately all did not go well. The 7th Bn Royal West Kent Regiment got lost within the wood whilst the 7th Bn Queen’s Regiment trying to attack across the open ground towards the north of the wood were forced to ground a 100 metres short of its edge. 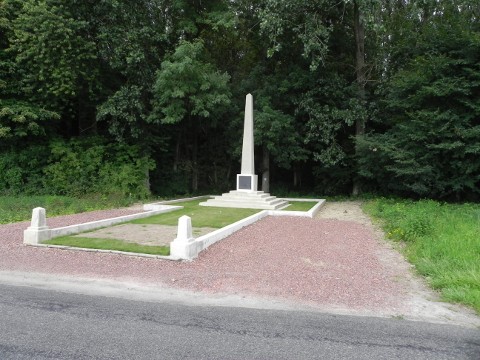 The memorial to the 18th (Eastern) Division at Trônes Wood

When a second bombardment of the wood at 2045 hours appeared to have little effect the Queen’s were ordered to pull back.

The Queen’s had not had their losses replaced since the 1st July and were down to a strength of just 280 strong (under half their theoretical strength). With a further 200 casualties during the day, the battalion had effectively ceased to exist.

The Division was now placed in the difficult position of being asked what it intended to do to remedy the situation; the new offensive was due to start within three hours whilst it was still dark.

At 0045 hours Brigadier General Shoubridge was informed that his 54th Brigade was required to have the wood under his control before dawn.

As it was not going to be possible to properly reconnoitre the position and time was of the essence the 54th Brigade decided to go for simplicity. They would advance through the wood from south to north securing the eastern edge as they did so.

As the attack was going to be made in the dark through a wood it would not in all likelihood be possible to locate all the German positions so these would have to be mopped up as and when they were discovered.

At 0430 hours (An hour after the main offensive had begun) the 6th Bn Northamptonshire Regiment advanced out of the sunken road near the brickworks towards the wood 800 metres away. They had to brave a storm of artillery fire as they crossed the open ground and entered the wood but from there they managed to make good progress despite being as disorientated as their predecessors.

If you look at the wood there is a small section that juts out on the right hand side and this was initially mistaken for being the northern edge of the entire wood.

At 0800 hours the 12th Bn Middlesex Regiment were sent forward in support and Lt Colonel Maxwell VC who was also in command of the operation went forward into the wood with his men. There he found that fighting had stopped and that there was a mix of men from different units who had either already been there from previous attacks to men lost in the current assault.

Rounding up every man that he could find Colonel Maxwell formed them up in an east-west line and swept the wood northwards. At first they were harassed by snipers hidden in the undergrowth, but once the order was given to shoot at will into anything that could conceal the enemy the problem appeared to have been efficiently dealt with.

About half way up through the wood there was a light railway line running through it and on its western edge the Germans had set up a machine gun post. This held the line up for a moment as Colonel Maxwell and a party stormed the post, killing the Germans and capturing their machine gun.

By 0930 hours the remaining Germans were being pushed out of the wood and were forced to flee towards Guillemont. As they did so they suffered numerous casualties from fire directed at them from the new cordon securing the eastern edge of Trônes Wood.

The wood was finally in British hands.

…when one company and part of another was held up in the attack on a wood by a hostile machine-gun which was causing heavy casualties, Sergeant Boulter, with utter contempt of danger, and in spite of being wounded in the shoulder, advanced alone over open ground under heavy fire, in front of the gun and bombed the gun team from their position. This act not only saved many casualties, but materially helped the operation of clearing the enemy out of the wood.