The monument will be found on the D73, off the main Bapaume to Albert road (D929) turning left and following the signs from Pozières.

As you arrive in Thiepval village turn right and park at the Visitors’ Centre. If you walk back out onto the road from the car park you will see the monument. 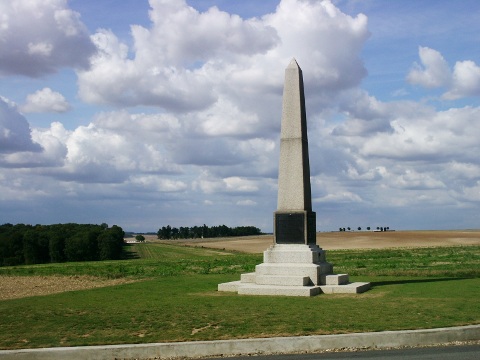 On the 26th September 1916 the British II Corps launched an offensive to finally drive the Germans from the Thiepval Ridge, a position that they had tenaciously held from the opening of the battle of the Somme on the 1st July. The direct assault on the Thiepval spur in July had failed and the only solution had been to force a path up the Bapaume Road through Pozières and slowly come round behind Thiepval.

Australians, British and Canadian troops had fought a long hard struggle throughout the summer to achieve that goal but if the British (and Canadians at Courcelette) now succeeded the Germans would finally lose their vantage point overlooking Albert.

A preliminary bombardment was begun on the 23rd September and Zero Hour was set for 1235 hours.

On the right of II Corps the 34th Brigade (11th Division) spent a hard day capturing Mouquet Farm but were not able to progress much beyond it. The 33rd Brigade had better success advancing up Nab Valley (The valley between Mouquet Farm and Thiepval village).

The task of taking Thiepval village was given to the 18th (Eastern) Division whose leading units crept out of their assembly trenches just before the barrage lifted. In an astute piece of planning the reserve units also held back rather than moving up into the vacated trenches. In this way the German defensive bombardment fell mostly on thin air.

On the right the 8th Bn Suffolk Regiment and 10th Bn Essex Regiment (53rd Brigade) swiftly moved up the right hand side of the village easily overcoming the weak resistance they encountered. Having taken their sector of the Schwaben Trench they waited the required ten minutes before following the bombardment on towards the Zollern Trench. Here the defence stiffened and the Brigade was forced to settle for what it had achieved having linked up with the 11th Division on their right.

On the left the 54th Brigade was given the difficult task of taking the western half of Thiepval including the old German lines whose defenders had so far resisted all efforts to dislodge them. On a very narrow front there was only enough room for the 12th Bn Middlesex to advance up through the village with a company of the 11th Royal Fusiliers behind to mop up the cellars and bunkers.

Machine gun fire from the ruins of the château momentarily halted the advance until a tank arrived and made further resistance futile. The Middlesex were able to make further progress on their right almost as far as the cemetery but after three hours of hard fighting the two battalions were exhausted and the north-western sector of the village was still holding out.

With many of the officers and senior NCOs becoming casualties it often befell to ordinary soldiers to seize the initiative.

part of the line was held up by machine gun fire and all the officers had become casualties. There was confusion and indication of retirement. Private Edwards, grasping the situation and on his own initiative, dashed out towards the gun, which he knocked out with his bombs. This very gallant act, coupled with great presence of mind and disregard of personal danger, made further advance possible and cleared up a dangerous situation.

Private Ryder’s company was held up by heavy rifle fire and all his officers had become casualties. For want of leadership the attack was flagging when Private Ryder, realising the situation and without a moment’s thought for his own safety dashed, absolutely alone, at the enemy trench and by skilful handling of his Lewis gun succeeded in clearing the trench. This very gallant act inspired his comrades, made the subsequent advance possible and turned what could have been failure into success.

Both men survived the war.

During the night the 7th Bn Bedfordshire Regiment were brought up to clear away the remaining German positions in the village. At 0545 hours on the 27th September they attacked without covering artillery gaining some surprise in doing so and by 1100 hours the Division was able to report that Thiepval was at last in Allied hands.

The memorial is dedicated to:

To the Glory of God and in imperishable memory of the officers, NCOs and men of the 18th Division who fell in the Great War 1914-1918.