Just to the east of the village of Longueval lies the wood of Delville soon known to the Allied soldiers who fought here in 1916 as the Devil’s Wood. Like many of the woods there were a number of tracks running through it and these were soon labelled off by the British into the likes of Buchanan Street and Princes Street. 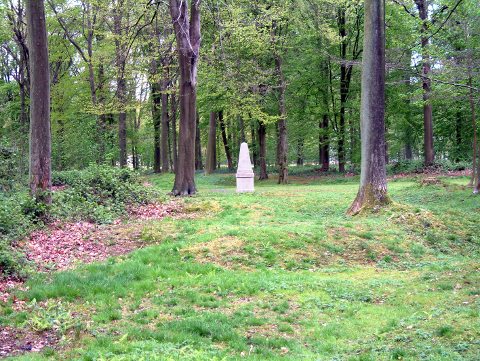 The reason for the prevalence of names from Scotland was simple — it was a Scottish Division that was doing the attacking — the 9th.

Of course Princes Street was actually a ride rather than anything that resembled a metalled road!

On 1st July 1916 the British and French armies launched the battle of the Somme. They were attacking on a wide front either side of the Albert to Bapaume road. The results can nearly broken down into the fact that to the south of the road some progress was made whilst north of it almost every thrust was repulsed with colossal casualties.

The success to the south led to plans being made to keep pushing at the German line in an attempt to put pressure on the fortress village of Thiepval to the north. Initially General Sir Henry Rawlinson had been in command of the entire front. After the fiasco of the first few days he was left to concentrate on pushing home the successes in the south with his Fourth Army, whilst General Sir Hubert Gough, in command of the Reserve Army (Now Fifth Army) took over responsibility for the area north of the main road.

On 12th July 1916 the front line had crept northwards to take in Mametz Wood. Rawlinson now turned his attention to Longueval.

In a rather daring plan the British launched a night attack on 14th July 1916 after a very short bombardment. One of the objectives was Delville Wood which had been reached by men from 9th (Scottish) Division by mid morning.

Confusion reigned as to whether or not the wood and Longueval had fallen. By the end of the day 9th Division had gained a lot of ground but were being held up by two German strong points. The first at Waterlot Farm on the Guillemont Road to the south east of the village and the second on the edge of the wood in front of them.

The newly arrived South African Brigade were to be put to their first major test.