The political situation in South Africa in 1914 was very different to the other nations of the British Empire. Canada had been obtained from the French in 1763 and Australia and New Zealand for example had been colonised without any great interference from rival empires (nobody of course was much interested in what the actual inhabitants thought about the process. We were bringing them civilisation whilst taking away anything that their land had to offer).

But South Africa was only four years old and had not long since finished a bitter war between the British and the Boers (1899-1902).

There was not a great deal of desire amongst either the Boer (of Dutch extraction) or the Black populations to rush off and defend Great Britain which had, within living memory, been responsible for the deaths of thousands of both peoples.

However, General Louis Botha the former commander of the Boer led the Union Defence Forces on a campaign into German South West African in September 1914. This was rapidly brought to a successful conclusion but the South African forces would have a harder time in German East Africa where they were confronted by General Paul Von Lettow-Vorbeck (who was still leading the dance when the war elsewhere had been brought to an end).

In theory South Africans although liable for military service were not required to serve overseas. This technicality was worked around in April 1915 by the simple expediency of asking for volunteers.

Enough men came forward (all of whom would of course have been white) to form the 1st South African Infantry Brigade under Brigadier General Tim Lukin. The Brigade, was made up of four regiments:

The 4th Regiment wore kilts with the Atholl tartan

After spending some time in Egypt the Brigade returned to France on 20th April 1916, destined for the Western Front where it was attached to the 9th (Scottish) Division.

It would serve with distinction throughout the war and remained with the Scots until the summer of 1918 when it had been so depleted by fighting that it had to be recalled to England and re-formed. It was back in France in September 1918 but this time with the 66th (Lancashire) Division. 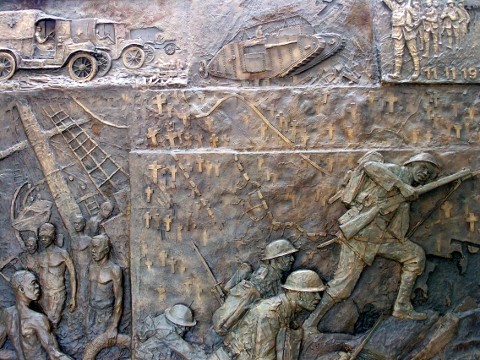 Part of a bronze panel by Jo Roos in the museum showing — The march to victory
The loss of the SS Mendi, with 626 black soldiers of the SANLC commemorated on the left

Throughout its service the Brigade suffered almost 15,000 casualties of whom 5,000 had been killed. Compared with its initial recruited strength (5,468) that represents a heavy price paid by the nation’s servicemen.

Although all of the fighting men were white (The US Army worked on much the same principle, denying its ethnic regiments a chance to fight) 25,000 Black volunteers served in France with the SANLC.

The soldiers would not be required to fight and would not be armed (as giving guns to the natives might set off a powder keg).

The Corps provided much needed support in the ports where they were engaged in offloading the millions of tons of munitions and supplies necessary for the front. But many also worked up near the front and their graves can be found scattered wherever the South African Brigade served.

1,120 of them would die during their service in France.

On the 21st February 1917, the SS Mendi, carrying more than 800 black soldiers of the SANLC was struck by a liner, the SS Darro off the Isle of Wight. The SS Darro then backed out of the holed vessel causing the SS Mendi to sink even faster.

Tradition says that Africans gathered on the deck of their doomed ship and danced a ritual death dance. In the fog and freezing waters of the English Channel 626 of them would perish.

The crew of the SS Darro made no attempt to rescue survivors.

The newly arrived South African Brigade were to be put to their first major test.