Plans – South of the Ancre

The river Ancre forms a natural boundary, and whilst not particularly wide it does run through a low and marshy valley with a number of pools and ponds. Its two banks are steep, and offer excellent fields of view from one side to the other.

Following the successful taking of the Thiepval ridge (Leipzig Redoubt), II Corps was pressing ahead with its advance over the ground successfully gained and lost by the 36th (Ulster) Division on 1st July. The Ulstermen had been forced to relinquish their conquest in part due to the outright failure of all the attacks to the north of the Ancre. In fact the front line in the general area of what is today the Ancre Cemetery and the Newfoundland Memorial Park had hardly budged at all in four months of fighting.

For the renewed attack on the Ancre, II Corps would be completing its final phase in the assault of the area north west of the Schwaben Redoubt and down towards the Ancre and St Pierre Divion. If you are visiting the Ulster Tower, from the left hand side of the entrance, look across and down towards the valley for an idea of the terrain.

Plans – North of the Ancre

V Corps on the northern bank of the Ancre would employ the 63rd (RN) Division to advance along the slopes of the Ancre towards Beaucourt Village and the 51st (Highland) Division to take the area of what is today the Newfoundland Memorial Park (Where you will find their monument).

To prepare for the attack, the artillery of V Corps had been laying down a scheduled bombardment, 30 minutes before dawn, for about an hour finishing with a flourish by all available guns including the field artillery. It was a ruse calculated to mislead the defending Germans on the 13th November when the final flourish would be the signal for the attack.

A further refinement in artillery cover was to be the use of a creeping barrage, which was to advance at a rate of 100 yards every five minutes (That is slightly less than 100 metres).

For their first action on the Western Front the Division was exceptionally well prepared, as little as possible had been left to chance with orders and training carried out to ensure that officers and men understood what was required of them, and what to expect in the way of difficulties.

The 189th Brigade formed up on the right of the Division, with its right flank on the road and railway line running immediately alongside the river. The Hood (on the right) and Hawke Battalions were in the lead with the Drake and Nelson Battalions in the second line. Behind them were 1st HAC and 7th Royal Fusiliers from 190th Brigade.

To the left of the 189th, the 188th Brigade were to advance along the upper slope, with the Howe Battalion and 1st RMLI leading and the Anson Battalion and 2nd RMLI behind. The two remaining battalions of the 190th: 4th Bedfords and 10th Royal Dublin Fusiliers, were to their rear.

A number of things had been learnt by the British throughout the summer of 1916, and the system of attack was for the first wave to take the German front line and to remain and consolidate it whilst the Battalions in the second line moved on to the preliminary objective in a leap-frogging motion. The change of leading troops would continue until all three objectives had been achieved.

The British front line was where you will find the Ancre British Cemetery today. Almost immediately between here and the Station the Germans had their first trench system — a veritable maze of front line and communication trenches wrecked by shell fire. Just to the right of the cemetery is a point in the marsh that was known as The Mound. 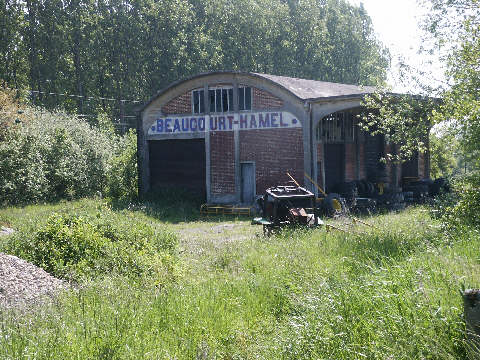 The Railway Station at Beaucourt

From the railway station there is a road which runs up the ridge from the café towards Beaumont. Just above this is a ridge running behind the road which formed the Germans’ 3rd line of defence and the Division’s first objective on what was annotated on the maps as the Green Line.

The Mound was to be taken by a designated company of the 1st HAC (Honourable Artillery Company) who were then to clear along the railway line to ensure that the far right of the attack was safe.

The top of the ridge at the Beaucourt Trench formed the second objective or Yellow Line. From, here the Division was to press on to the Red Line and its final objectives which were the village of Beaucourt itself and the Muck Trench behind it. 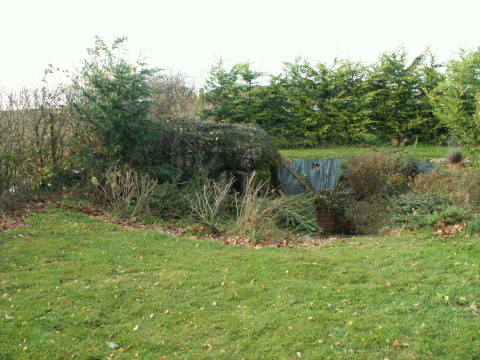 The entire attack would be uphill and within the field of fire from machine guns from both flanks — one of the major reasons for the 36th Division’s inability to advance on 1st July across exactly the same terrain.

Unlike the hot summer’s day which had opened the battle in July; November 1916 found the ground a quagmire.