Webmatters : The battle of the Somme: Mouquet Farm 1916

The commanders immediately set about trying to sort out just where the front line was and getting proper coordinates for the positions of their men. Despite this update on the 18th August, as the Australians were about to begin another attack, their forward line was hit by allied shellfire. 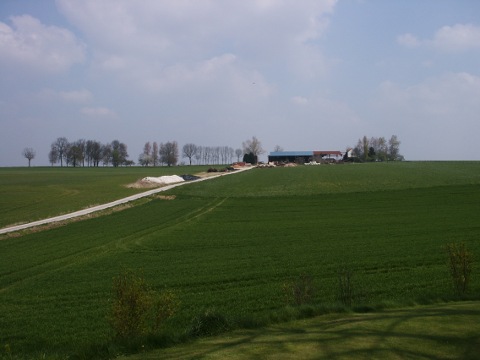 3rd Brigade AIF attacked three days later and managed to get into the ruins of the farm before being forced to withdraw. Looking at the farm today it is difficult to think of a pile of rubble and shell holes, but it is just as important to realise that the cellars and dug-outs underneath it provided the German defenders with plenty of protection.

By the time they were relieved by 2nd Division AIF, on the 22nd August, 1st Division had taken another 2,600 casualties on top of those they had suffered at Pozières.

On 26th August 6th Brigade tried to outflank the farm on the left but the attack was not a success. The only high point was that a German counter attack was also beaten back. Australian casualties continued to run high and two days later their 4th Division was brought back into the firing line.

Then it began to rain. The moonscape became a quagmire. Passchendael in the summer of 1917 has made an impact in history as the battle of mud, but many commentators have stated that the Somme
was worse.

At 2300 hours on 29th August a night attack was launched across the mud resulting in units getting lost in the shell holes and battered trench systems. The attack was a complete failure. Almost 500 more casualties were suffered by the two battalions that had made the attack.

On 3rd September 1916 the Australian troops were given their final chance to take the farm. 4th Division AIF had been reinforced by 1st Canadian Brigade, but it was to be the Australian’s own 13th Brigade that would make their attack on the farm.

At 0510 hours 49th Battalion began their assault on the trench systems to the far right of the farm, the 51st Battalion assaulted the farm itself and the 52nd battalion covered the Fabeck Graben.

The 49th made good progress in the face of stiff opposition linking up with the 52nd who had managed to get up past the farm whilst the 51st clawed their way into the pile of rubble that Mouquet Farm had become.

Unfortunately a counter attack by the Germans at 0800 hours was driven home under the cover of a heavy barrage and the Australians were once more forced out of the farm and many of the captured trenches. The leading units of the 51st Battalion were never seen again.

The Canadians were pushed into the line to halt the Germans and the Allied front line was secured on the right to include part of the gains made by the 49th Battalion.

The Canadians take over

At the end of the days fighting, men from 1st Canadian Division relieved the very weary men of the 4th Australian Division. The last few days had cost the 4th Division another 1,300 casualties.

For the Canadians their first few days in the area were those of almost constant bombardment and German counter attacks trying to dislodge them from the ground captured by the Australians.

Almost a fortnight after they had arrived in the area, on 15th September 1916 Tanks made their first appearance on the battlefield during the battle for Flers and Courcelette. This battle was on a wide front which incorporated yet another attempt to take Mouquet Farm.

The 1st Canadian Mounted Rifles were given the task of taking the farm and a German strong point in the Fabeck Graben. The attack on the farm was beaten off by the defenders and the attack on the strong point came under bombardment from Allied guns whilst they were waiting out in no man’s land. To add insult to injury the German machine gunners were then able to fire with impunity until the Canadians own machine gunners were able to retaliate. Having taken almost fifty per cent casualties the Canadians were forced to withdraw to their own trenches.

Further advances over the next twenty-four hours resulted in the Canadians announcing that the remains of the farm were finally taken and that the front line had been pushed beyond it. This was nearly true but what they didn’t realise was that the German’s had tunnels running under the ruins that came up behind the new Canadian line.

On 16th September the Canadians were replaced by 34th Brigade from the British 11th Division. Ten days later a mixture of units and a tank finally managed to drive the German defenders from their last remaining dug-out. Photographs from the time show that Mouquet Farm had been totally levelled. A few piles of rubble were all that remained of a once sizeable group of buildings.