Pozieres is a village some 6 kilometres north-east of Albert, and the Cemetery, which is enclosed by the Pozieres Memorial, is a little south-west of the village on the north side of the main road (D929) from Albert to Pozieres. 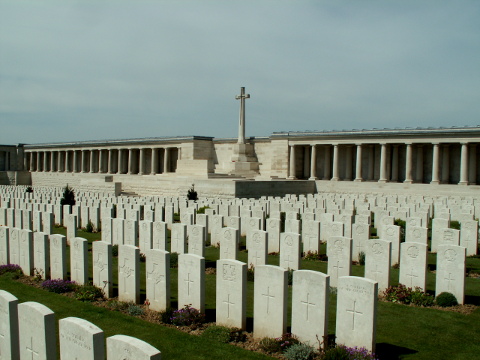 The village of Pozières was attacked on 23rd July 1916 by the 1st Australian and 48th (South Midland) Divisions, and was taken on the following day. It was lost on 24th-25th March 1918, during the great German advance, and recaptured by the 17th Division on the following 24th August.

Plot II of Pozières British Cemetery contains the original burials of 1916, 1917 and 1918, carried out by fighting units and field ambulances. The remaining plots were made after the Armistice when graves were brought in from the battlefields immediately surrounding the cemetery, the majority of them of soldiers who died in the Autumn of 1916, but a few represent the fighting in August 1918.

The following were among the more important burial grounds from which British graves were concentrated to Pozières British Cemetery :

There are now 2,760 Commonwealth servicemen buried or commemorated in this cemetery. 1,382 of the burials are unidentified but there are special memorials to 23 casualties known or believed to be buried among them. There is also 1 German soldier buried here.

The cemetery is enclosed by the Pozières Memorial, which relates to the period of crisis in March and April 1918 when the Allied Fifth Army was driven back by overwhelming numbers across the former Somme battlefields, and the months that followed before the Advance to Victory, which began on 8 August 1918.

The Memorial commemorates over 14,000 casualties of the United Kingdom and 300 of the South African Forces who have no known grave and who died in France during the Fifth Army area retreat on the Somme from 21st March to 7th August 1918. The Corps and Regiments most largely represented are The Rifle Brigade with over 600 names, The Durham Light Infantry with approximately 600 names, the Machine Gun Corps with over 500, The Manchester Regiment with approximately 500 and The Royal Horse and Royal Field Artillery with over 400 names.

The cemetery and memorial were designed by W H Cowlishaw. 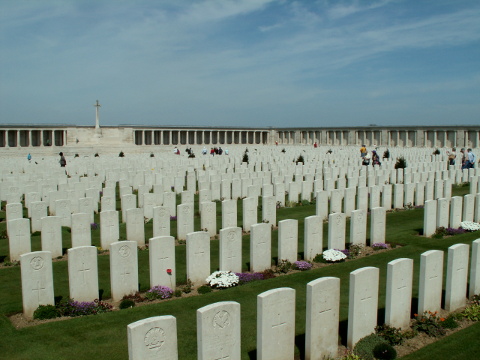 The cemetery is enclosed by the Pozières Memorial 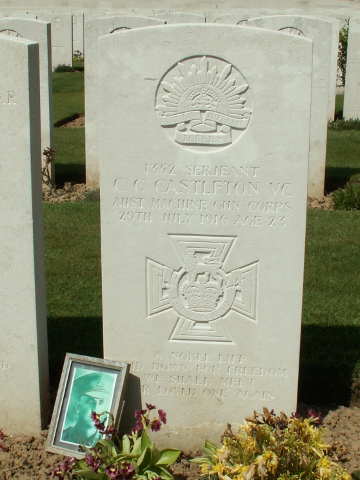 For most conspicuous bravery. During an attack on the enemy’‘s trenches the infantry was temporarily driven back by the intense machine gun fire opened by the enemy. Many wounded were left in No Man’s Land lying in shell holes.

Serjeant Castleton went out twice in face of this intense fire and each time brought in a wounded man on his back. He went out a third time and was bringing in another wounded man when he was himself hit in the back and killed instantly. He set a splendid example of courage and self-sacrifice. 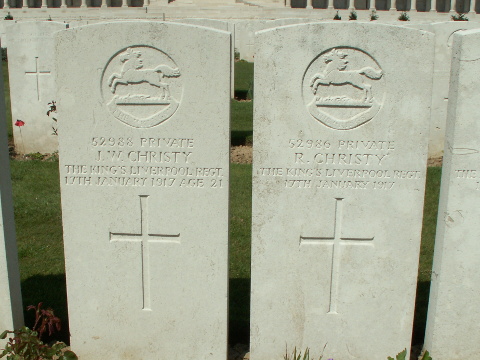 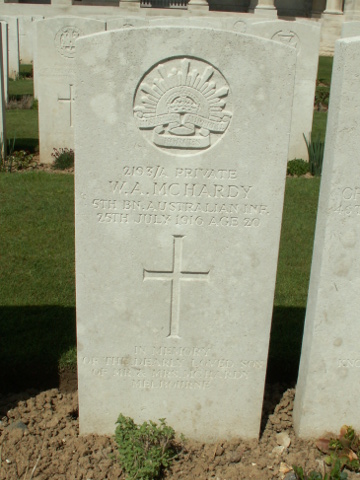 His 27 year old brother Frank, (Private 2194/A), of the same Battalion was killed on the same day but has no known grave. He is commemorated on the Australian Memorial at Villers-Bretonneux.