Villemontoire is just to the west of the main D1, Château-Thierry to Soissons road, approximately 10 kilometres from Soissons. From the N2, Soissons Ring Road, take the D1 towards Château-Thierry. Ignore signs for Villemontoire and continue on the D1 until the crossroads signed for Vierzy. Turn right here along the D1280 towards Vierzy following the CWGC sign for Raperie British Cemetery. The monument is at the first junction to your right after about a kilometre.

The first left turn at the second CWGC sign, takes you to the Cemetery a few hundred metres away.

The monument was raised in honour of the French 67e Regiment d’Infanterie whose 2nd Battalion took the village of Villemontoire on 25th July 1918 during the French Counter Offensive of the 2nd Battle of the Marne.

The 67e RI were raised in and around Soissons and were thus the local boys. Their battle honours are shown either side of the relief — including one now from 1940. 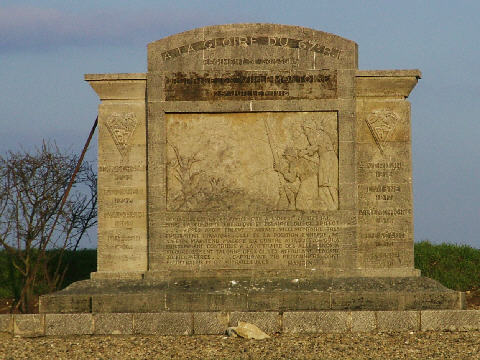 Erected in September 1938 it was subsequently destroyed by the occupying Germans in 1940. Following the Allied victory in 1945 a plaque was placed on the site prior to the replacement of the monument commenting on the folly of those who had had the temerity to try to erase history.

The bas relief shows the soldiers advancing towards the remnants of the village. Below is an account of how the regiment having taken Villemontoire and repulsed six counter-attacks, harried the retreating Germans for a distance of thirty kilometres capturing 716 prisoners (of whom 26 were officers) and 97 Machine Guns.

Their Battle Honours are listed on either side — including a later one from the Second World War.

Their first Battle Honour is that of Hondschoote (Hond-skot) in 1793 which was fought by the revolutionary French against the British and allies of the Duke of York. The Duke gained the reputation during that Flanders Campaign of having marched his ten thousand men up and down a hill — probably Cassel.