Buzancy is a village in the Department of the Aisne, 7 kilometres south of Soissons and 50 kilometres west of Reims, Northern France. From Soissons, turn left off the N2 ring road (going south) onto the D1 road towards Château Thierry, passing the villages of Courmelles and Berzy-le Sec. After about 6 kilometres, you will see the American First Division Memorial on your left at the entrance to Buzancy. 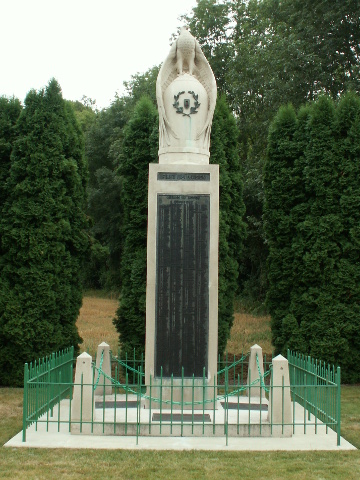 In March 1918 the Germans launched their Spring Offensive : the Kaiserschlacht. They succeeded in pushing back the British Fifth Army, destroying it in the doing so, but ultimately failed to actually pierce the line. A new offensive was then launched in Flanders.

However, once again, although the line was badly bent it did not break and with the aid of American Divisions the 2nd Battle of the Marne broke the Ludendorf’s grand plan to beat the Allies before the Americans could become fully operational.

The time had come for the Allies to launch their own offensive and the decision was taken that the French Général Mangin would lead the counter attack on the morning of 18th July with his Tenth Army. The delay must have kept the Germans waiting and wondering what had happened with their intelligence reports for an attack on the 14th July (The French National Holiday). 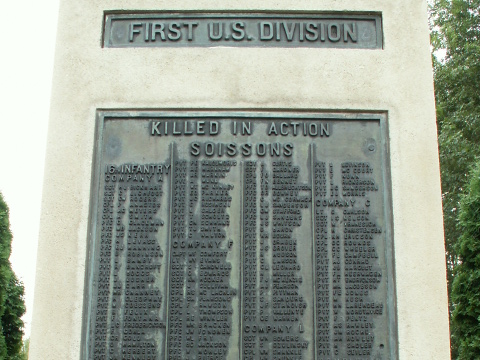 Between the 11th and 13th July Mangin’s men had indeed made a few small thrusts to even up the line here and there but what the Germans did not realise was that in great secrecy the Tenth Army was moving into the Forests of Retz and Villers-Cotterêts. The equivalent of 24 Divisions of Infantry, 1,500 guns and more than 300 tanks. The night of the 17th was foul with a constant downpour of rain leaving the soldiers still trying to get into position soaked through.

On the opposite side of the Château-Thierry salient Général Degoutte’s Sixth Army was also readying itself for action.

The XX Corps acted as the spearhead for the attack with the Moroccan Division in the centre and the Americans either side. The barrage opened up at 0435 hours with the Infantry immediately following the creeping barrage. The surprise was complete and over the next few days the Tenth Army made great gains before encountering heavier resistance as it pushed steadily on towards Soissons. 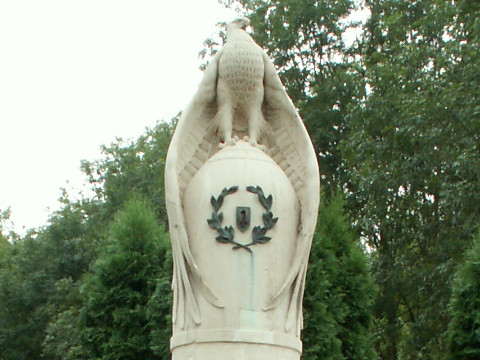 All First World War, US 1st Division Monuments are located in France and are of the same design as this monument at Buzancy.

The memorial commemorates the part played by the US 1st Division in the battle for Soissons at the end of the 2nd Battle of the Marne in 1918.

The bronze plaque recounts how in the course of Général Mangin’s great counter attack the 1st Division advanced 11 kilometres into the German lines taking the village of Berzy-le-Sec and arriving here just in front of Buzancy. 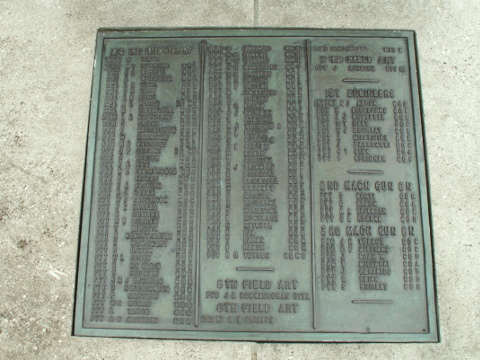 The Division lost 2,213 men killed and 6,347 men wounded in the four days that they were fighting.

They were relieved by the 15th (Scottish) Division on 22nd July whose memorial can now be found a few kilometres away in Buzancy Military Cemetery.

Plaques on the sides of the monument list those who died by Regiment and Company. 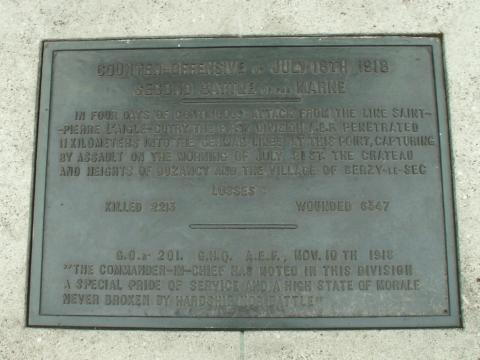 A plaque explains the history.

Counter Offensive of July 18th 1918
Second Battle of the Marne

In four days of continuous attack from the line Saint Pierre l’Aigle Cutry
The First Division AEF penetrated 11 kilometres into the German lines
at this point capturing by assault on the morning of July 21st the château
and heights of Buzancy and the village of Berzy le sec.

G O No 201 GHQ AEF Nov 10th 1918
“The Commander in Chief has noted in this Division a special pride of service
and a high state of morale never broken by hardship nor battle.”