Fontenoy is a small village about 10 kilometres to the west of Soissons along the main N 31 towards Compiègne.

Just after the French Military Cemetery at Ambleny (Bois Roger) turn right onto the D 17. 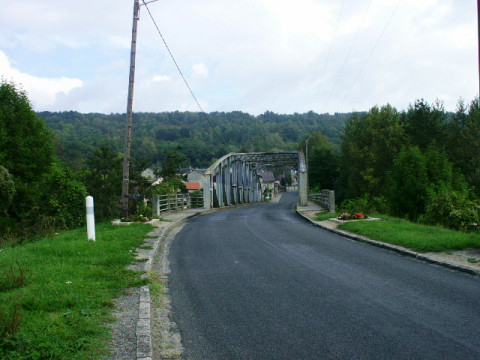 The bridge over the Aisne was the scene of heavy fighting.

Within a kilometre you will reach a bridge over the river Aisne. It was the only one available for troops heading up to the front line near Confrécourt and it soon became infamous for its casualty rate. The cemetery you have just passed contains many of those who were killed here.

Note that in French, names that end in -oy are pronounced -wah and not -oi.

Within the village there is a small monument to two soldiers who were shot by firing squad. Make your way to the village and then walk down the side of the church (there is a sign) Rue de Montier.

About 200 metres along the lane you will come to a small plaque proclaiming the story of the two men. It was inaugurated by the local Maire M Gerbault in 1994 who explained the reason why it was necessary for such a memorial : it served to remind people of injustice, of an injustice that had resulted in the deaths of two soldiers.

This small monument is thought to have been the first erected in honour of French soldiers passés par les armes (Shot at dawn).

The original French War Plan (Plan XVII) of 1914 required their soldiers to throw themselves at the Germans in all out attack. In their red and blue uniforms they presented easy targets to the German machine gunners. Apart from the horrendous casualties incurred, this style of attack resulted in some units realising that they were being asked to achieve the impossible — morale started to fall.

An indication of French casualties can be gained from the following statistics.

In October 1914 General Villaret issued orders that the troops must be dealt with in a strong and disciplined manner. His orders resulted in numerous Courts Martial ; often for trivial offences.

Léonard Leymarie was born on the 4th January 1880 and was assigned to his local reserve regiment : the 305e Régiment d’Infanterie (305e RI — 305th Infantry Regiment).

Each Active Regiment had a reserve recognisable by the addition of 200 to the number — 105th and 305th.

Whilst acting as a forward observer in the trenches he was hit in the hand by an enemy round and his comrades told him to go back and get himself treated.

His leaving his post resulted in his Court Martial for abandoning his post as a result of self mutilation.

The prosecution was based on a dubious medical report and Leymarie protested his innocence throughout. Very little of the circumstances came out at his trial and he was convicted and shot that same afternoon at 1630 hours at Port Fontenoy.

Leymarie left behind a wife and two young children who were taken into the care of the State in 1919.

He was rehabilitated in 1923 but there is no mention on his card as to exactly when. He is buried at Ambleny (Grave: B 135) and was granted the title of Mort pour la France.

On 12th December 2008 he was formally added to his native town’s war memorial at Seilhac.

Lucien Bersot was born on the 7th June 1881 at Authoison (Haute-Saône). Having completed his military service (As all Frenchmen did on attaining 20 years of age) he found himself called up into the 60e RI an active front line unit (Reservists in time of war were also used to bolster the numbers in the parent unit).

The regiment found itself in action near Soissons and despite heavy losses was not considered to have been very pro-active as we would say these days.

As his own uniform had become ripped Bersot asked his sergeant for a new issue. The Sergeant said that none were available but that he should use those of Bersot’s friend who had been killed in front of him and were still covered in blood. When he refused to put them on he was charged and initially given eight days for disobeying an order. His commanding officer Lt Colonel Auroux would appear to have been looking to set an example and not only charged Bersot but also presided over his Court Martial (Completely contrary to regulations).

Two comrades, Élie Cottet-Dumoulin and André Mohn who tried to speak up on his behalf were sentenced to ten years hard labour — in North Africa.

To no great surprise Auroux found the soldier guilty of disobedience in the face of the enemy and condemned him to death. He was shot the following day: 13th February 1915.

Following the war his case was taken up by one of the Associations and a Court of Appeal on 12th July 1922 could do little apart from find him innocent.

Rehabilitated he was, like Leymarie, accorded the important status of : Mort pour la France. Without it no pension would have been paid to their widows and of course families of the shot had to suffer the social stigma and no small amount of shunning by the community.

Many of the families had to struggle against the establishment for years in trying to get justice for their loved ones. In Bersot’s case the argument was even put forward that they were not trying to apportion blame, just that the injustice should be recognised.

His body was repatriated to Besançon with great ceremony by the organisations fighting on behalf of the executed. There is a commemorative plaque at 11 rue Battant, Besançon to both Bersot and his comrade Cottet-Dumoulin (who was killed in Serbia in 1917 — like the British Army, condemned soldiers were often sent back to the front). André Mohn was killed on 25 September 1915 at Jonchery on the Marne.

In France the campaign for those Shot at Dawn was based on individual cases whereas in the UK a blanket pardon was the objective.

For an insight into the most controversial of all these cases as well as the fierce fighting in this area return towards Pont Fontenoy but turn right towards Nouvron along the D 17 and then to the nearby village of Vingré via the D 2020.

A short distance away on the main Soissons Road you will find the French cemetery where Leymarie is buried together with a number of other French SAD victims.