Vingré is a hamlet situated to the north-west of Soissons between the two villages of Nouvron-Vingré and St Christophe à Berry. It can be reached from the N 31 between Soissons and Compiègne by turning northwards at either Vic sur Aisne (D 13) if coming from Compiègne or more interestingly via Fontenoy on the D 17 coming from Soissons.

Fontenoy : Executed over a pair of trousers

If you have come via Fontenoy and then Nouvron you will come down into the village along the D 2020. Just off this road is a famous memorial to the fighting along the plateau.

At Vingré there is an important monument, which is well sign posted, sitting by the side of the road on the way to St Christophe (D 138). 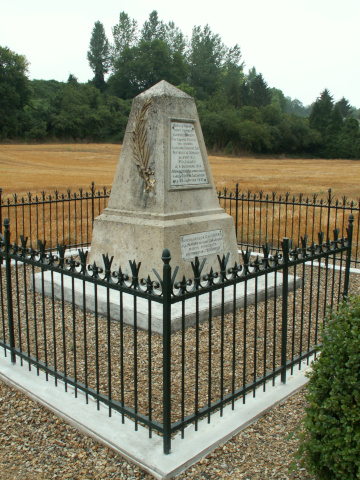 To encourage the others

A story of injustice

At the age of twenty Frenchmen were called forward for their period of Military Service. Having served his two years (in 1913 it was increased to three), the soldier passed into the Reserve for eleven years during which time he would (in theory) be called up so many times a year to continue with his training.

As a guide, infantry regiments were made up of three active or two reserve battalions, but the numbering of the battalions was consecutive: 1,2 and 3 plus 4 and 5. A battalion would have been about 800 strong.

One difference between the French system and that of the British is that French Regiments fought as an entire unit, the battalions remaining together. The British fought by battalions with no requirement for the 2nd battalion to be in the same Brigade as the 1st.

If you are looking at French infantry regimental numbers they are reasonably easy to distinguish. Those marked RI — Régiment d’Infanterie – form the Active and Reserve regiments. Each Active regiment had a reserve whose number was 200 more than the parent unit.

Thus the 298e RI were the Reserve Regiment for the 98e RI. In essence if you can subtract 200 from the regimental number it is a reserve unit. Of course, by the end of the war the distinction between the two classes had become blurred as new conscripts were sent to wherever they were needed most.

The fighting for Vingré : November 1914

Following the 1st Battle of the Marne in September 1914 the German army was forced to retreat in the prelude to the Race to the Sea. The plateau of Confrécourt dominates the Aisne in this sector and the fighting for a while became quite intense.

It should be remembered that at this stage in the war trenches were extremely rudimentary and were often little more than connected fox holes. The task of digging the line, that would soon stretch from the coast to the Swiss border, was only just beginning.

One of the French Regiments that had distinguished itself at the Battle of the Marne was the 298e RI, a Reserve Infantry Regiment made up of soldiers from Roanne on the Loire. Storming German positions they had captured the colours of the German 36th Regiment of Fusiliers. For this feat of arms their own were decorated with the Légion d’honneur at Ambleny on the 11th November 1914. In gaining their battle honours though the regiment had lost more than half its effective strength.

The area around Vingré quietened down but localised sporadic attacks were still the order of the day.

On the 27th November the 1st Section of the 19th Company were occupying the front line and were on the receiving end of a bombardment which lasted some time. Eventually deciding to pull back they left eight look-outs to watch for any possible enemy encroachment.

At 1700 hours the canon stopped and the German infantry rushed the French trenches quickly capturing the hapless look-outs. Things changed for the worst when the German infantry continued their advance deeper into the French positions and came up against soldiers of the 2nd Section who had no idea that the 1st had already pulled back.

The French withdrew onto their Section position where 2nd Lieutenant Paulaud decided that he risked being outflanked. Paulaud thus gave the order to retire on the support lines where the situation could be re-assessed and a counter-attack organised.

Having carried out those orders the 2nd Section was immediately ordered by their Company Commander: Lieutenant Paupier, to retake the front line, which they did, the Germans having already retired with their prisoners.

In effect, a skirmish where apart from the loss of a couple of men the line remained exactly where it had been at the commencement of the bombardment.

Unfortunately for the soldiers of the 5th and 6th Squads who had been the troops bumped by the German infiltration, the Divisional General saw things differently and condemned the men to 8 Days in the front line for their lack of ardour.

His report was duly passed up the line to General Étienne de Villaret at Corps Headquarters.

The general was a strict disciplinarian and had issued an order on the 20th October 1914 stating that full use should be made of Special Courts Martial. Salutary examples would soon put an end to any lack of enthusiasm.

Villaret was incensed by the lack of moral fibre shown by the two squads and convened a Special Court Martial. The charge was: Abandonment of their posts in the face of the enemy. A charge that carried only one penalty — death.

These Special Courts Martial had been decreed on the 6th September.
Three judges ; accused caught red-handed ; execution ; all within 24 hours.

In addition, there was no recourse to an appeal against a Special Court Martial.

The soldiers themselves though were confident. It was all being done for show, they had followed their orders, by the end of the action the position had been maintained.

At 1500 hours on the 3rd December 1914 2nd Lieutenant Bodé of the 18th Company was ordered to represent the accused. He had only just come out of the front line and knew nothing at all about the case in hand.

He was given two hours to speak with the twenty-four prisoners.

At 1700 hours the Court was convened under the presiding council of the Regimental Commander: Lt Colonel Pinoteau.

For the defence, Bodé pointed out that the suddenness of the Germans’ arrival due to the thinly held adjacent positions had forced the men back, but there was no panic within the ranks, they retired in an orderly fashion, sought instructions and acted upon them. Having moved back and reorganised they then acted on further orders to retake their original positions.

For the prosecution, Procureur Lieutenant Achalme rejected the entire defence and insisted on seeking the death penalty for all twenty-four accused. Furthermore, he declared, 2nd Lt Paulaud had in fact ordered the position to be retaken immediately : he had never given the order to retire !

In the face of such a blatant cover up of his own actions by Paulaud, Bodé could only fall back on the excellent conduct of all of those who stood before the court.

The twenty-four accused were told to line up as they would have been in the trench and the six to the right were condemned to death. The decision had been reached the night before and the entire process had been a charade. Villaret wanted them to be made examples of what would happen to all other cowards.

The six soldiers who had been chosen all but at random were:

The court decided that as the enemy had come from the right, the panic had started there. Those on the right were the most guilty.

In fact both Floch and Gay had been captured in the initial rush of the position and only managed to escape again during a momentary lapse of concentration by their guards.

As Floch stated in his last letter :

I die innocent of the crime of abandoning my post. If instead of escaping from the Germans I had remained a prisoner, my life would have been safe.

Quinaud and Pettelet hadn’t even been on the right, but the way they had given their evidence suggested that they had been.

Apart from the fact that Bodé was not aware of the full facts here was another flaw in the defence ; in trying to answer all the questions put to them as fully as possible the soldiers themselves acted in the naive belief that the system would protect them.

As one of those not chosen remarked afterwards. In 1914 they had faith in the system. If the same incident had happened in 1917 the replies to the questions would not have been so obliging to the prosecution.

The six men spent the night of the 3rd December under guard and were led out the following morning at 0730 hours to six posts, six firing squads, and a waiting battalion, as it was the custom to make sure that everyone else in the condemned soldier’s unit : got the message.

On a single order 72 rounds were fired, the six were declared dead and the Battalion was paraded past the corpses to the sound of bugles.

In 1919 a number of movements including those of the Veterans Associations started demanding the rehabilitation of numerous victims of firing squads.

It should be realised that without an honourable death and the mention: Mort pour la France, the widow of a dead soldier received nothing. If the death had been by execution then the family also had to suffer the humiliation of being shunned by the community. Mme Floch found herself being refused service in shops. The children of the executed were taunted at school often to the point of their having to be withdrawn from classes. Other family members could find it hard to get work, being connected to cowards who had deserved to be shot. 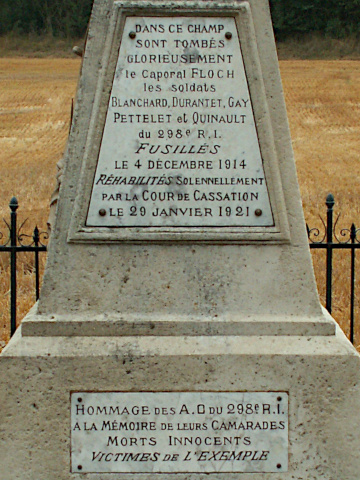 In the case of the Vingré six the Court of Appeal (Cour de Cassation) met on the 29th January 1921. A number of points were put forward by the families through their representatives.

The decision of the court was that the men should be reinstated and on the 4th February were classified as: Morts pour la France. They were all granted the Médaille Militaire and the Croix de Guerre posthumously. The widows would benefit from the war pensions which would be back dated.

This was all very fine but there was a feeling that justice would not have been done until those responsible had themselves been brought to justice.

Paulaud was almost certainly the only officer ever brought up before a Court Martial for an act in connection with a dubious trial. He was charged with perjury and to the amazement of the families, was acquitted. 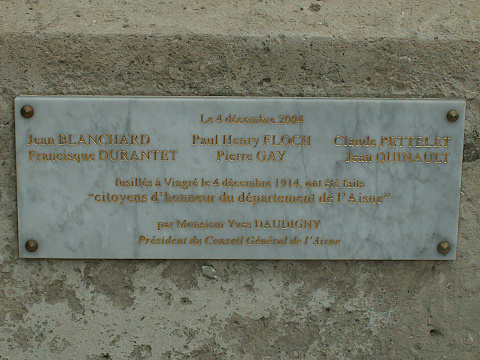 This small monument was inaugurated on the 5th April 1925 in the presence of the families of the victims as well as a sizeable crowd of supporters.

The executed soldiers had been raised to the position of martyrs, now at last the tricolour that had served every other soldier as a shroud would be theirs as well.

The site has become a place of pilgrimage and the local association have erected a highly informative notice board just opposite.

There are photographs of the six men plus explanations of the entire history of the incident.

The remains of all six soldiers were recovered by their families and were buried at home.

It’s disgraceful, disgraceful, all to give us a lesson, buck up our morale, give us courage. For the moment you can say nothing, but when I can talk, I will say what is in my heart and since we couldn’t save their lives we will save their honour.

Memorials to soldiers shot at dawn

At Fontenoy there is a small plaque to two French soldiers shot for petty reasons.

Fontenoy : Executed over a pair of trousers
Mutiny on the Chemin des Dames

A number of executed soldiers are buried in the cemetery out on the main road.