The Nampcel Soldatenfriedhof is situated approximately 8 km to the north of Vic sur Aisne. It is on the right hand side of the road (D 145) as you reach the outskirts of Nampcel. 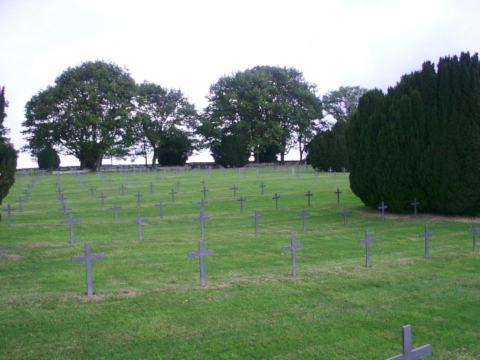 Initially it was created as a French/German concentration cemetery by the French military authorities in 1919. Then, in 1922 the French graves were removed and more German graves were brought in from a 35 kilometre radius.

Most of the dead had only been give provisional field graves or buried in the local communal cemeteries.

The area around Nampcel saw violent clashes both during the opening moments of the war as well as during its closing stages, and for this reason you will find graves from both periods.

In particular you will find numerous soldiers from the 75th Bremen Regiment who were killed over the period of 20th and 21st September 1914 during the German retreat following the battle of the Marne.

During the German tactical retirement in March 1917 (Which was to hand the British what they had fought for during the Somme, and to extend the starting positions of Nivelle’s forthcoming and disastrous campaign.) the area came into possession of the French.

The majority of the graves though arise from the Kaiserschlacht in the spring and summer of 1918.

Of those buried in the cemetery 6 574 have their own graves (93 of them are unknown) whilst in the four mass graves there are 4 750 victims of whom only 894 have been identified.