Sitting on the banks of the Meuse the town of Stenay has a long and rich history of military life. 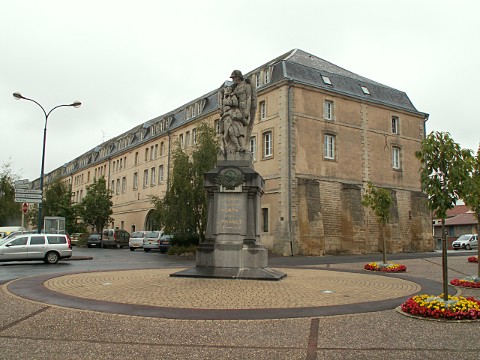 The Artillery Barracks at Stenay

Thierry the son of Clovis was taken by the site which had already been a stronghold in Roman times.

On the death of Clovis, Thierry and his brothers inherited sections of the kingdom, and in his case built a palace at Stenay. The royal town prospered and Thierry and his next two descendants would be buried in the château chapel.

Clovis Christianised France in 496 at the behest of his wife Saint Clothilde. He is considered to be the first king of what is now considered France. He was also to make Paris his capital. 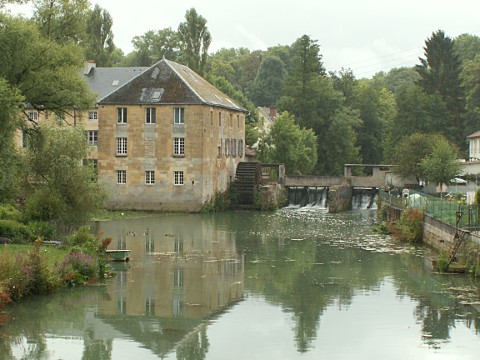 In 674 Dagobert II had become the local king and reigned here before being assassinated by his chief minister in the local woods on the 23rd December 679. There is a local tradition/myth which suggests that his son Sigebert IV was bundled away to safety and thus somewhere the line of the Merovingian kings continues. Dan Brown’s book the Da Vinci Code, touches on this story.

The town eventually came into the possession of the Dukes of Bouillon (which is just across the border in modern day Belgium — and well worthy of a visit).

In 1087 Godefroy the Hunchback of Lower Lorraine, was murdered, having previously named his nephew Duke Godefroy of Bouillon as his heir. This did not sit well with his, widow Mathilda of Tuscany who spent some time trying to reclaim her domains. It was she, in the course of one of her outings, who gave rise to the legend of Orval and gave impetus to its abbey.

Godefroy would sell the town and most of his possessions to the Bishop of Verdun in order to finance his participation in the 1st Crusade of 1095. By a quirk of history Godefroy launched the battle for Jerusalem on the 14th July 1099, and took the city the following day.

Stenay was fortified between 1609 and 1611 and was gifted by Louis XIV to the Prince de Condé in 1646. This was a time of war between France and Spain who possessed the Netherlands — and up until recently much of what we now call northern France. To show his discontentment with Louis’s autocratic method of rule, The Condé went over to the Spanish.

The result of that was Louis’s arrival in 1654 for a siege which lasted for 56 days. The town was subsequently given to Fabert, who had conducted the siege on behalf of the King. He was, however obliged to dismantle the fortifications.

For almost the entire Great War the town would be in the hands of the Germans and Crown Prince Wilhelm set up his HQ here. 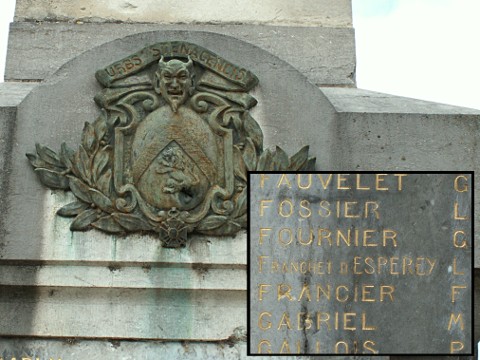 From the museum if you head up into the town centre you will see the old artillery barracks on your right behind the town war memorial. There used to be three barracks in Stenay but this block is all that survives, and it has been turned into flats.

You will notice that on one side of the memorial it has the devil’s head on it. This has become a symbol of the town and can be seen again on the Mairie.

The son was serving with the 401e RI (Infantry Regiment) when he was killed at Verdun on the 25th October 1916, four days after his 19th birthday.

The road you are walking up is that of the 18th Chasseurs who remained garrisoned here up until just before the First World War broke out. They were moved closer up to the border with Germany — which was no longer so far away, as most of Lorraine had been occupied since 1871 following the Franco-Prussian war.

Why the Devil’s head ?

The Coat of Arms of the town is a chevron and lion based on those of Godefroy de Bouillon, but in 1860 a M. Jentain from Montmédy made some rather imaginative assertions about how Stenay came by its name.

He argued — and without any foundation at all — that the name derived from Sathanay (remembering that French pronounces TH as a T). It all made perfect sense on a cosmological and Hebraic level !

From 1885 the Devil’s head appeared on the headed paper of the Maire and when the town was rebuilt in 1925 the builders presumed that it was correct and put the head both above the Town Hall and on the War Memorial.

The problem with this amusing tale is that the town has existed since before the time of the evangelists of the 5th Century — when the word Satan (indeed Hebrew) would have come into the language.

The local historians are more inclined to believe that Stenay could well simply mean the town of Setinius who lived in the area in the 1st Century. 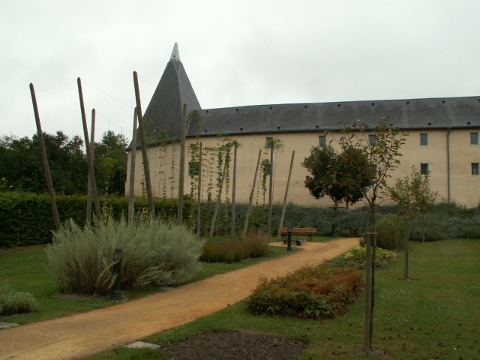 Near the Meuse can be found this extremely well put together museum devoted to the craft of making beer down the ages.

Having been a military town for so long it is perhaps fitting that the museum is housed in the former food store of the 17th century citadelle. In 1879 an enterprising owner turned the structure into a malting house. Time and wars passed and the building fell into disuse.

Having been bought by a group of enthusiasts a beer museum was created and opened to the public in 1986.

For its size and content the museum is unique in Europe, and offers a chance to retrace the development of beer making from the earliest moments up until the modern era. In 2005 it was refurbished and equipped with information touch screens. There are some 45,000 items on view in an area of 1400 sq metres.

At the end of the tour the brasserie offers a large selection of beers from the local area as well as the chance to enjoy a meal.

In July 1914 the town was the barracks to the 120e RI (Infantry Regiment) and before the mobilisation orders or war had even been declared they had been directed out of the town to guard the approach routes.

On the 10th August 1914, at Mangiennes, the first battle on French soil took place since the Franco Prussian War. The village is about a twenty-five minutes drive away and you will find a monument as well as a large German cemetery.

This area was for a long time hotly disputed by the French and the Holy Roman Empire/Spain of Charles Quint.

Marville was one of the front line towns defended by the French in the opening weeks of the war and is noted for its Spanish Renaissance architecture and its Listed cemetery — possibly the only one in France.

Closer to hand and along the route that the French Army took towards its disastrous battle in the Ardennes is the quite superb Spanish citadelle at Montmédy. It would only be a short drive from there across the border into Belgium, the August 1914 battlefields and the Abbey of Orval, with its connections back to Mathilde and Godefroy. It is also one of the Trappist monasteries that brews its own beer.