A miner for the Public Works Department in Tauranga Michael Tobin had volunteered for the NZ Engineers Tunnelling Company in October 1915.

Michael Tobin fell ill and was admitted to hospital with Broncho-Pneumonia on the 14th April 1916 but died the following day, becoming the first death of the NZEF on the Western Front.

Following the commemoration of the 95th Anniversary of the Battle of Arras a party of Tunnelling Company descendants and New Zealand officials came to Beauval Cemetery to pay tribute to the first of their fallen.

The rain and wind were awful as they arrived but the solemn procession filed up through the communal cemetery behind Raina Davies, the group’s Maori representative. At a ceremony like this one the Maori believe that rain is a good omen as it represents the tears of heaven.

Her role as Kuia (doyenne) was, on this day, to lead the group into the cemetary with a karanga (a summoning or ceremonial address). This is a Maori protocol for when a group of people go onto a marae (formal courtyard etc) for funerals or other special ceremonies.

On this occasion Raina was calling all New Zealand spirits who fought overseas to return to their native land.

The formal tradition is that the women follow behind the kuia and then the men. Usually at these ceremonies it would be the men that then did the speaking.

As it was a long walk through to the Commonwealth plot Raina continued her summoning of the spirits until she reached the first graves. There she stood alone having invited the others to continue to Michael Tobin’s grave.

Stuart Park who was acting as the groups elder (kaumātua) started the proceedings with a mihi whakatau (welcoming the visitors and acknowledging the tupuna : ancestors). To complete the welcome Raina now sang a song (waiata). 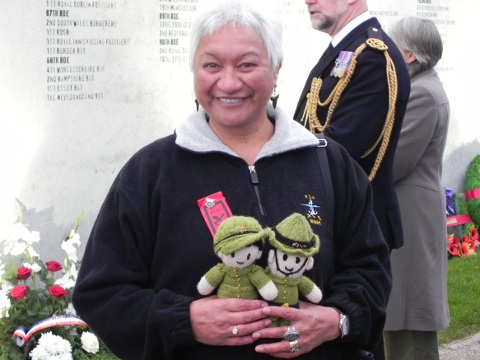 Throughout the groups pilgrimage Raina carried two small dolls that had been given the names of Hey You and Sir. The two wee soldiers were there to act as her aides and it would be through them that the spirits of the dead would travel home to New Zealand.

On returning home Raina, Hey You and Sir faced the four winds (nga hau e wha) and the spirits took leave of their hosts to make their way back to their final resting places.

The remainder of the ceremony consisted of speeches by Jeff Tobin the great nephew of Michael Tobin and HE Rosemary Banks, the New Zealand Ambassador to France.

Wreaths were placed on the grave together with a photograph of Michael.

Some photos from the ceremony