Webmatters : The St Pol memorial to the British Unknown Warrior

The town of St. Pol sur Ternoise (Not to be confused with St Pol sur Mer near Calais) is about 34 km west of Arras on the D 939 road towards the coast. As it passes St Pol this road is a dual carriageway. Take the Frevent/St Pol junction towards St Pol on the D 916. You will pass the St Pol British Cemetery on your right behind the houses.

Continue to the junction on the bridge and turn right still heading towards the Centre Ville. At the roundabout continue straight on keeping the railway line immediately on your right. At the next roundabout pull into the railway station car park.

The monument is immediately opposite the Gare SNCF and it is usually possible to find a space there and walk across the road. Parking is free.

There are a number of monuments on the green including the town war memorial. 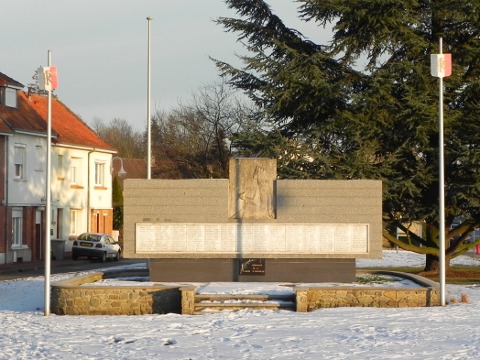 Orders were sent out to France and Belgium for the recovery of a British Empire serviceman who could not be identified from each of the main battlefields: the Aisne, Arras, the Somme and Ypres. (Some mention six bodies but the only confirmed accounts state four).

On the 7th November 1920 the four soldiers were brought to the Military Chapel in St Pol sur Ternoise in the Pas de Calais where, following the end of the war, the British Army had set up its Headquarters.

They were placed on stretchers and each was covered by a Union Flag. The delivering parties were immediately ordered back to their units to ensure that nobody would know that their man had been the one chosen.

That night Brigadier General L J Wyatt (Commanding the forces in France and Belgium) entered the chapel. The solemnity of the moment cannot have escaped him and after reflection he placed his hand on one of the bodies.

This one was placed in a simple coffin whilst the other three were removed for re-burial.

In the afternoon the coffin was transferred to the Château at Boulogne sur Mer where it was placed in the library; transformed for the occasion into a chapel. There it spent its last night on Continental soil surrounded by a Guard of Honour formed by Poilus from the 8e Régiment d’Infanterie (The St Omer Regiment).

At noon on the 9th the coffin was placed in an oak coffin, recently arrived from England. It had been fashioned from a tree from the Royal Palace at Hampton Court and was bound in iron bands. A crusader-style sword presented by the King from his own collection was passed through one of them. The lid bears the words: A British Warrior who fell in the Great War 1914-1918 for King and Country.

The CWGC have no idea where these three graves are located. There are two Great War military plots in St Pol and neither appears to contain post 1919 burials. Major General Sir Cecil Smith stated that they were buried beside the Albert-Bapaume road to be discovered there by parties searching for bodies in the area. 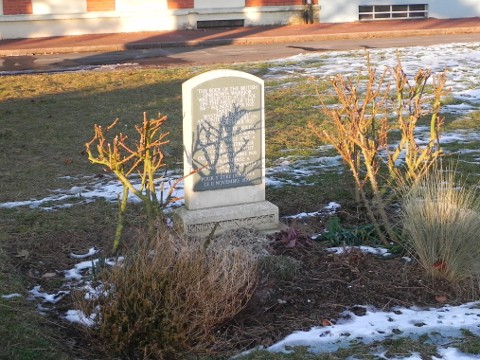 The Body of the British Unknown Warrior was selected
at St Pol on the night of the 7th — 8th November 1920.
Taken to Westminster Abbey and interred there on
The 11th November 1920