Cambrai is a town about 32 kilometres south-east of Arras on the main straight road to Le Cateau.

From the Cambrai inner ring road take the D942, Solesmes road, for approximately 1.5 kilometres to find the Cemetery on the right hand side of the road.

There are CWGC Panels indicating the way, but do not forget that this is in fact a German Military Cemetery (Route de Solesmes Soldatenfriedhof) so following the signs for that will also bring you here.

If asking the way you may well find that the locals will also refer to it as the German Cemetery. 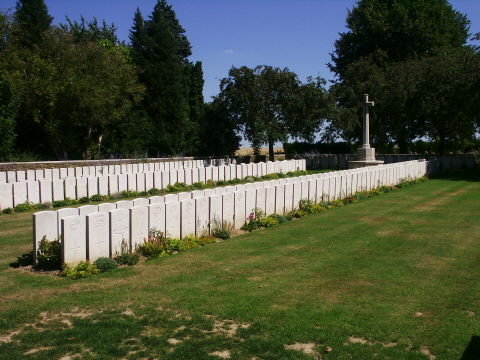 Cambrai was occupied by German forces on 26th August 1914 and it remained in German hands until 9th October 1918.

The 1917 Battle of Cambrai (20th November to 3rd December) left the Allied line still eight kilometres from the city on the south-west side, and the German offensive of March 1918, drove it far to the west, but the 1918 Battle of Cambrai, the last of the Battles of the Hindenburg Line, delivered the city into the hands of Commonwealth forces, though it was very severely damaged and the main square was still burning two days after the fight. Two Casualty Clearing Stations were later posted to the town, 30th CCS in October 1918 and 22nd CCS in November 1918.

Cambrai East Military Cemetery was made by the Germans during their occupation and laid out with the greatest care, with monuments erected in it to the French, Commonwealth and German dead.

On 11th August 1918, as an inscription in the cemetery records, the Bavarian Commandant handed over to the city the care and maintenance of the cemetery.

The French greatly enlarged the cemetery over the next few years bringing in graves from other German cemeteries.

The graves have now been regrouped. The Commonwealth Plots are numbered I to VI, in the south-east corner, and Plot VII, near the north side, on the left of the entrance. Plots I to IV were made by Commonwealth troops after the capture of Cambrai. Plots V and VI contain 69 graves brought from the battlefields east and south of the city, and Plot VII contains the graves of Commonwealth prisoners. 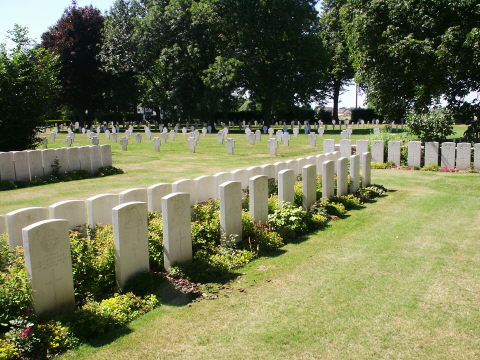 The cemetery now contains 501 Commonwealth burials and commemorations of the First World War. 28 of the graves are unidentified but special memorials are erected to seven soldiers known to be buried among them. Another special memorial commemorates a soldier buried by the Germans in Cauroir Communal Cemetery, whose grave could not be found.

The Commonwealth plots were designed by Charles Holden.

There are a number of burials within the graveyard of soldiers who died of injuries (or the Spanish flu that was prevalent at the time) after the cessation of hostilities. 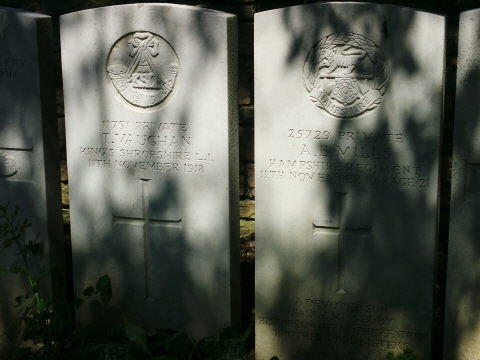 Cambrai East Cemetery is in fact a mixed cemetery containing graves of three of the major belligerents.

What at first appears to be a square of French crosses is at closer scrutiny a plot of mostly Russian soldiers from their Brigades who had been fighting with the French Army. 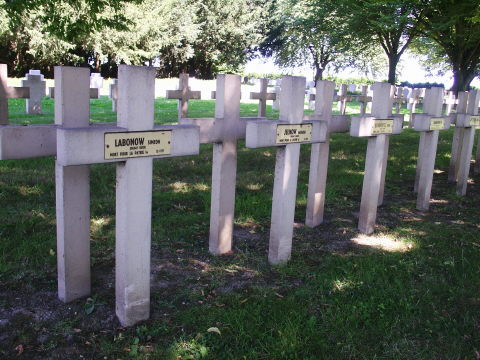 The small statues showing the various helmets of the three armies were all erected during the German period. Each is in a sector belonging to one of the other armies. 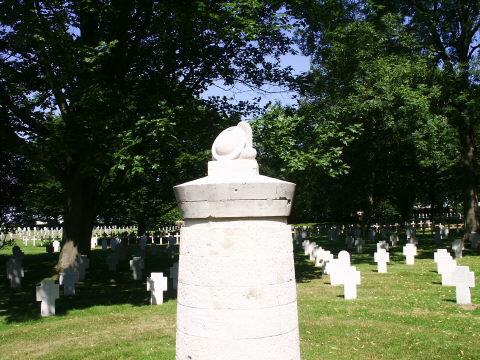 A British helmet in the Soldatenfriedhof 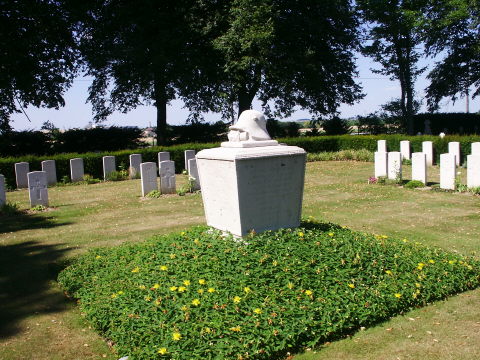 A German helmet in Plot VII 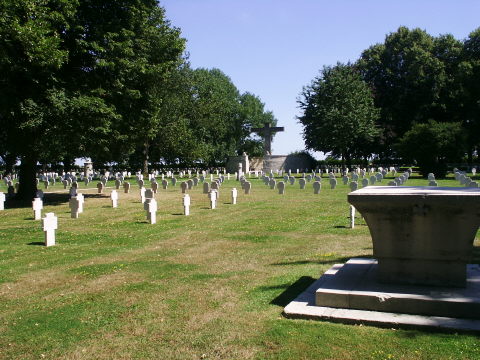 The German Military Cemetery obviously forms the major part of Cambrai East with a large cross and texts in both French and German. It was created in March 1917. Cambrai was a major hospital base and dealt with German and Allied casualties alike.

Prof. Dr. Wilhelm Kreis—Architect and co-founder in 1919 of the German War Graves Commission—designed the central monument in 1917.

Within the cemetery are a number of the famous Jasta Boelcke, which was stationed for some time in the Cambrai area. The cemetery was enlarged by the French Military Authorities by bringing in German graves from a number of communal cemeteries.

Following the Franco-German War Grave Agreement of 19th July 1966 the Volksbund Deutsche Kriegsgräberfürsorge began work on the refurbishment of the hedges and plants.

In 1977 the replacement of the wooden crosses commenced with the use of stone markers. Rather unusually for their Military Cemeteries the stone is white. 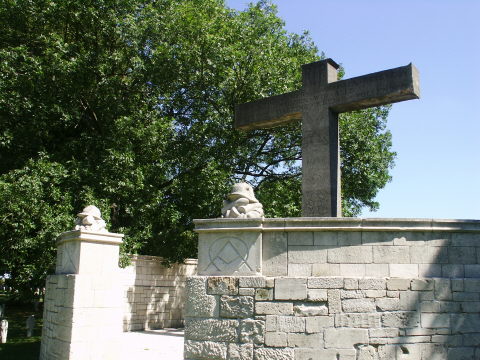 Note the French and German helmets

7,939 soldiers have their individual graves—though you will note that each grave marker invariably has at least two names on it. 242 of them are unidentified.

Amongst the crosses you will also find the graves of 26 Jewish soldiers.