The village of Merkem lies on the N 369 between Ieper and Diksmuide.

From Ieper take the N 369 towards Boezinge and Dikesmuide. A few minutes after Boezinge you will come across a large metal cross on your left. This is the Franco-Belgian memorial to the gas attacks of April 1915. Continue across the bridge for about four kilometres. The memorial will be on your left with a small parking area.

The hamlet is known as de Kippe and the battle here takes its name after the hamlet. 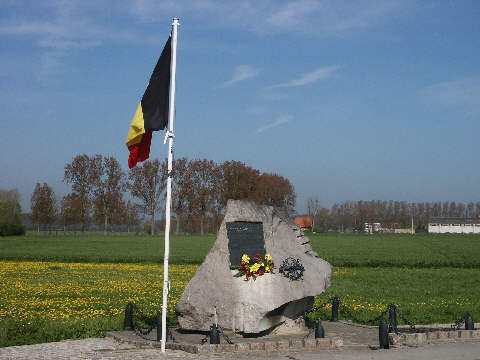 In April 1918 the Germans launched the Battle of the Lys (also called the 4th Battle of Ypres) as part of their great spring offensive to win the war before the American Army gave the Allies a numerical superiority. The battle stretched both sides of the Franco-Belgian frontier.

The Belgian 3de Legerdivisie (3rd Division) took over this sector from the French at the end of 1917, under the direction of Lieutenant-General Jacques — the same man who had commanded the Belgians during much of the fighting for Diksmuide in November 1914. There is a statue to him in the centre of that town.

Much of the area had been badly eroded during the preceding battles and the crossroads at the hamlet of Kippe was one of the few dry patches where the road was still solid.

At dawn on the 17th April 1918 the Germans opened a bombardment along the entire Belgian front between Langemark and the Lake Blankaart (a few kilometres further up the road towards Diksmuide). The artillery preparation was followed at 0800 hours by their infantry advancing out of Houthulst forest.

The 58 Division had some success against the Belgians’ outposts near Langemark but even those had been regained by nightfall.

More seriously the 1 Landwehr Division plus a regiment from the Naval Division managed to break through the Belgian defences at Kippe. They immediately began rolling up the Belgian line southwards and augmented their attack with 6 Bavarian Division.

The Belgian artillery was slow to retaliate, in part because all the telephone cables had been cut and communication had to be carried out by pigeon or optical signals.

Belgian machine-gun posts at Draaibank (on the high ground off to the south-east) had not, however, been overcome and their fire caught the advancing Bavarians out in the open and halted their advance.

Although their line had been badly shaken, the Belgian 3de Divisie rallied to the west of Merkem and from about 0945 hours began counter-attacking and recaptured Kippe. As the morning progressed, the Belgian artillery recovered its rhythm and contributed to the halting and then eviction of the German infantry.

In repulsing the Germans the Belgians captured over seven hundred prisoners and sixty machine guns. Importantly, the day had shown that they were able to master the Germans and stand their own ground.

General Plumer of the British Second Army (whose artillery had come to the aid of the Belgians at Langemark — the junction between the two armies) telegraphed his congratulations and King Albert awarded the Order of Leopold to the banners of the 9de Linieregiment and the 1e Jagers te voet (light infantry). All the regiments that took part in the battle were given the Battle Honour : Merkem.

Why not Kippe ? Possibly because the word means chicken in Dutch.

The memorial is formed by a large block of stone surrounded by a fence made from chain and eight large shells.

On the stone is a bronze plaque :

Underneath the various units making up the Division are listed.

On its right is a ring made up of palm leaves and crossed rifles.