The village of Merkem lies on the N 369 between Ieper and Diksmuide.

From Ieper take the N 369 towards Boezinge and Dikesmuide. A few minutes after Boezinge you will come across a large metal cross on your left. This is the Franco-Belgian memorial to the gas attacks of April 1915. Continue across the bridge for about four kilometres.

You will see the large stone memorial to the Belgian 3rd Division on your left. Immediately afterwards you will come to the hamlet of de Kippe.

The statue is amongst the houses on your left.

This fine statue stands between houses on the left hand side of the road as you travel through Kippe towards Diksmuide. 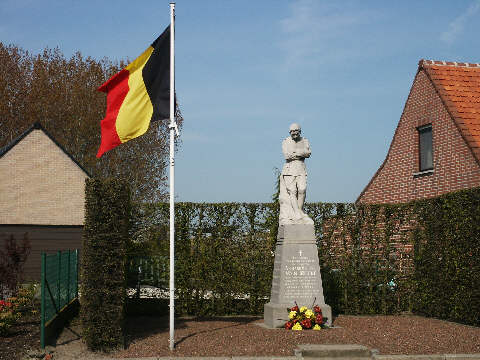 Armand Victor Van Eecke came from a family of ten children whose parents, Arthur and Reinhilde, belonged to a distinguished family from the bourgeoisie living in Watou (in hop growing country near the French border).

When war broke out Armand was an eighteen-year-old student and doing very well at the University of Leuven. Following the destruction of that town and the Battle of the Yser, Armand volunteered on 1st July 1915, at the age of nineteen.

On 8th January 1916 he arrived at the front with the 5th Company, 2nd Battalion of the 3rd Line Regiment (3de Linieregiment) with the rank of Sergeant (Adjudant)

As a platoon commander, he appears to have been capable inspiring his men and leading by example. During an attack on the morning of the 9th September 1918 he led the first wave that needed to cut its way through the barbed wire. He was killed as he was working on the wire.

He was buried in his home town of Watou on 12th September.

Shortly after WWI the Van Eecke family purchased the land on which Armand was killed, in order to erect a statue in memory of their son. The statue was commissioned by and paid in full by the family.

It was by sculptor Gustaaf Pickery from Brugge made a portrait of the deceased and at his suggestion this was presented as a soldier who thinks about the meaning and significance of the war.

Text and poem were selected by the family itself. The unveiling of the statue took place quietly in 1919. For years did the family itself the maintenance, but the monument was donated on November 3, 1982 in the municipality of Houthulst.

His regimental memorial cross is situated at Steenstraat (you passed it on the way out from Ieper).

The statue was raised by the parents of Armand who was killed at the age of 22 during the fighting on 9th September 1918.

Shortly after WWI the Van Eecke family purchased the land on which Armand was killed, in order to erect a statue in memory of their son. The statue was commissioned by and paid in full by the family.

The sculptor was G Pickery who created a portrait of Armand in a reflective pose — somebody who was thinking about war and its consequences.

The text and poem were selected by the family. The unveiling of the statue took place quietly in 1919. For decades afterwards the statue was maintained by the family themselves but on 3rd November 1982 it was donated to the municipality of Houthulst.

The text around the base of the statue reads :

To our dearly beloved son and brother Armand Victor Van Eecke student at the high school of Leuven Adjutant killed in the 5th Company of the 3rd Line Regiment, born in Watou, who fell here during the attack of 9th September 1918, aged 22,

A light disappeared from our family, a treasured voice silenced, an empty space created within the family, that nothing can ever refill.