From Ieper take the N 369 towards Boezinge and Dikesmuide. A few minutes after Boezinge you will come across a large metal cross on your left. This is the Franco-Belgian memorial to the gas attacks of April 1915. You will now see a café on your right. Park here the monument is immediately to the right of the café.

Following the Battles of the Yser and Ypres of October/November 1914 the Germans dug themselves into a wide arc surrounding Ieper.

The town was effectively the last large urban area still in Allied hands. With a view to breaking the stalemate of trench warfare the Germans decided to use a massive chlorine gas attack. This would be the first time that gas would be used on such a scale.

On 22nd April 1915 the Germans released the contents of five thousand cylinders of chlorine gas against French Territorial and North African troops near Langemark. The effect was catastrophic. Caught completely unawares the French fell back towards the Ieperlee Canal which was held by the Belgians’ 6th Infantry Division.

The Germans, however, were not only wary of their own weapon but had only intended it as a trial. Instead of pushing on through the enormous hole that they had created they stopped and dug in.

Over the ensuing days the Germans managed to capture Lizerne which put the Belgian flank in danger. Heavy fighting by the Belgian and French troops managed to retake the hamlet on the 27th April and by mid May the Germans had been pushed back across the canal.

The 3e Régiment de Ligne were amongst those who took part in the struggle to re-secure the position relieving the Belgian Grenadiers who had already taken the brunt of the fighting (They have a monument not far from the Cross of Reconciliation).

Formed in Mons in 1830 from a former Dutch unit, the 3e Régiment de Ligne took part in the fighting against the Dutch at Antwerp in 1831.

As with other Belgian regiments the 3e Régiment were split at the beginning of the war into two, forming the 3e and 23e Régiments. Their losses were so bad, however, that they were soon re-amalgamated back into just the 3e Régiment. In May 1916 the regiment would be re-split and this explains the twin sponsoring for the monument.

In May 1940 the regiment would be fighting in this exact same area during the German invasion. It has since been disbanded.

The original monument was much more elaborate with decorative work on the bridge as well. However, during the British retreat towards Dunkerque they blew up the bridge on 28th May 1940. Fortunately a local managed to save the original plaques.

The new memorial was unveiled on 26th April 1953 by the Veterans’ Association of the 3rd and 23rd Regiments. 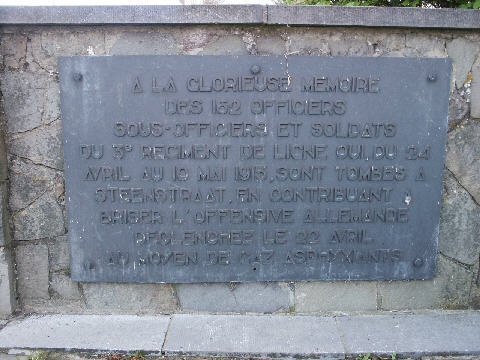 This small monument consists of a white cross with a sword marked in black surrounded by a semicircular wall with two bronze plaques :

To the glorious memory of the 162 officers, NCOs and soldiers of the 3rd Regiment who, between from 24th April to 10th May 1915 fell at Steenstraat, whilst contributing to the breaking of the German offensive launched on the 22nd April with the use of asphyxiating gas.