Boulogne-sur-Mer is a large Channel port. Boulogne Eastern Cemetery, one of the town cemeteries, lies in the district of St Martin Boulogne, just beyond the eastern (Château) corner of the Citadel (Haute-Ville). 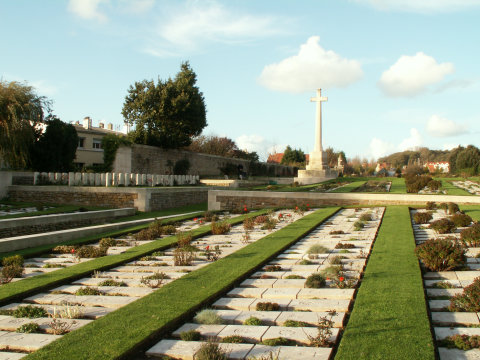 This is a large civil cemetery and is only open from 0800-1800 hours. The CWGC section has its own entrance. 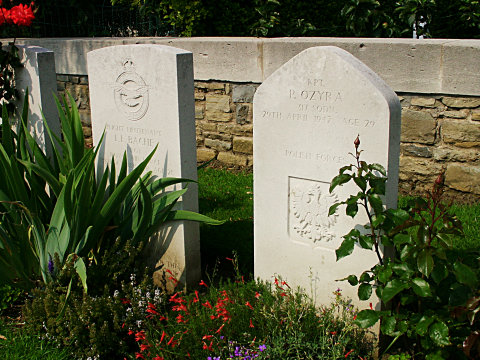 British and Polish Pilots from the Second World War

Boulogne, was one of the three base ports most extensively used by the Commonwealth armies on the Western Front throughout the First World War. It was closed and cleared on the 27 August 1914 when the Allies were forced to fall back ahead of the German advance, but was opened again in October and from that month to the end of the war, Boulogne and Wimereux formed one of the chief hospital areas.

Until June 1918, the dead from the hospitals at Boulogne itself were buried in the Cimetiere de L’Est, one of the town cemeteries, the Commonwealth graves forming a long, narrow strip along the right hand edge of the cemetery. In the spring of 1918, it was found that space was running short in the Eastern Cemetery in spite of repeated extensions to the south, and the site of the new cemetery at Terlincthun was chosen.

During the Second World War, hospitals were again posted to Boulogne for a short time in May 1940. The town was taken by the Germans at the end of that month and remained in their hands until recaptured by the Canadians on 22 September 1944.

The Commonwealth plots were designed by Charles Holden. 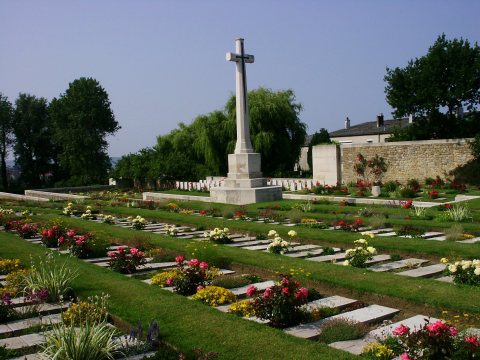 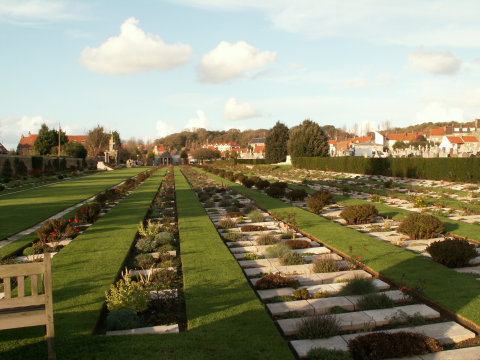 There are a number of French graves within the cemetery and these are unusual in their design as they bear the Boulogne sur Mer Coat of Arms. Alongside are the graves of a number of Portuguese soldiers surrounding a small memorial in their memory. 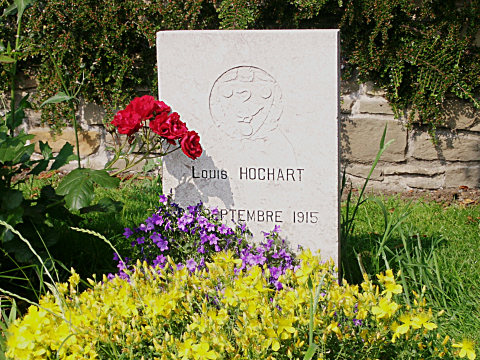 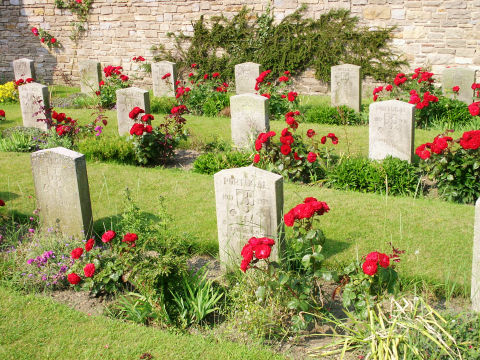 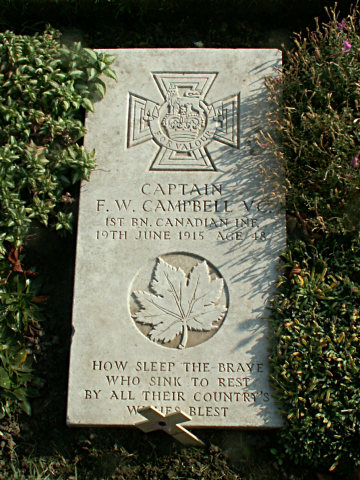 For most conspicuous bravery on 15th June 1915, during the action at Givenchy. Lieutenant Campbell took two machine-guns over the parapet, arrived at the German first line with one gun, and maintained his position there, under very heavy rifle, machine-gun and bomb fire, notwithstanding the fact that almost the whole of his detachment had then been killed or wounded.

When our supply of bombs had become exhausted, this Officer advanced his gun still further to an exposed position, and, by firing about 1 000 rounds, succeeded in holding back the enemy’s counter-attack. This very gallant Officer was subsequently wounded, and has since died. 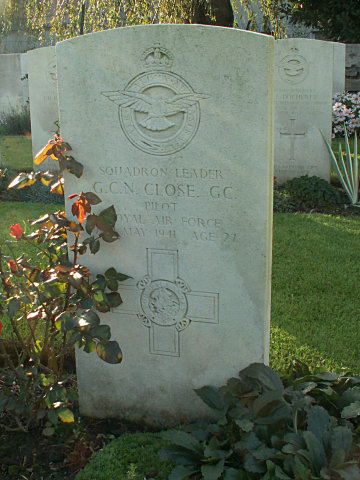 Flight of 30th December 1937, in connection
with the Waziristan operations: For Gallantry

Pilot Officer G Close, RAF was duty pilot on the Miranshah aerodrome when an aircraft laden with bombs crashed and burst into flames. This officer, despite the explosion of a bomb and small arms ammunition, made persistent attempts to extinguish the flames and rescue the crew, until stopped by a superior officer. 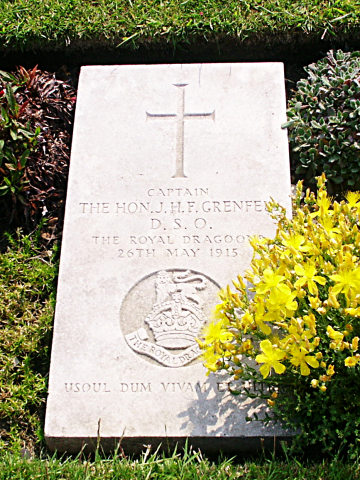 One of the war poets and author of Into Battle which was printed alongside his obituary in The Times.

The thundering line of battle stands,
And in the air Death moans and sings;
But Day shall clasp him with strong hands,
And Night shall fold him in soft wings.

His brother Gerald (Billy) a 2nd Lieutenant in 8th Bn Rifle Brigade was killed in July 1915 and is commemorated on the Menin Gate.

His cousin Francis was awarded the Victoria Cross and is buried in Vlamertinge. 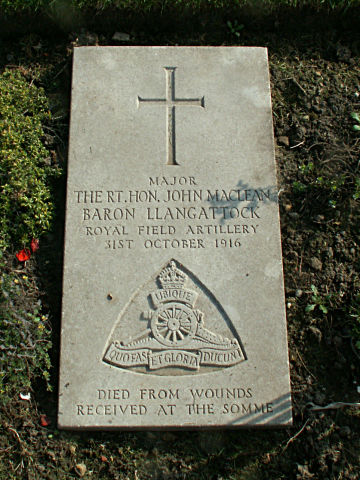 His younger brother was Charles Rolls – pioneer in motor vehicles along with Frederick Royce. Charles was the first Briton to be killed in an air crash (1910). On John’s death in 1916 the male line of the family became extinct. 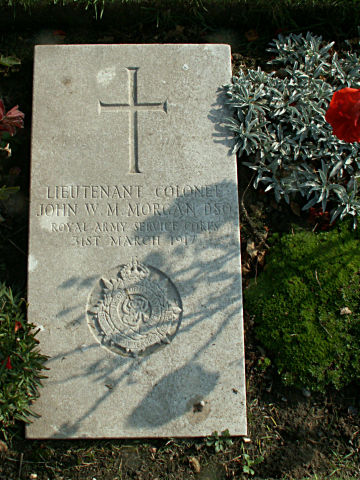 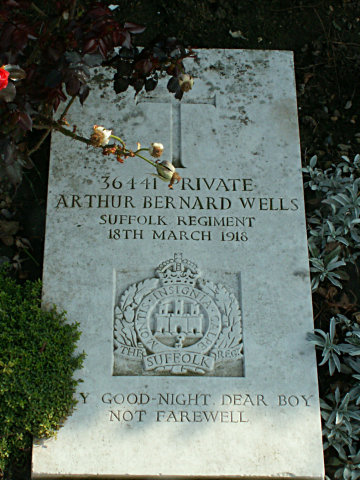 Private Arthur Wells 36441
11th Bn Suffolk Regiment
Died on 18th March 1918 aged 29
Only son of Ellen and the late Thomas Townsend
of Bleak Cottage, Steeple Morden, Royston, Herts,
He was first to volunteer in this village 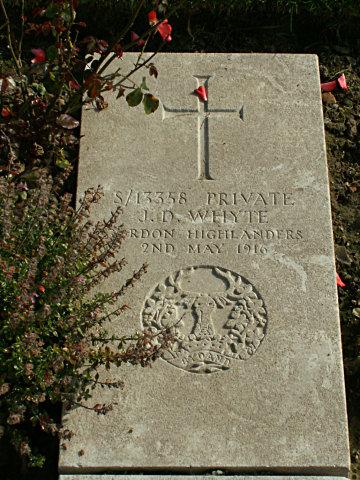 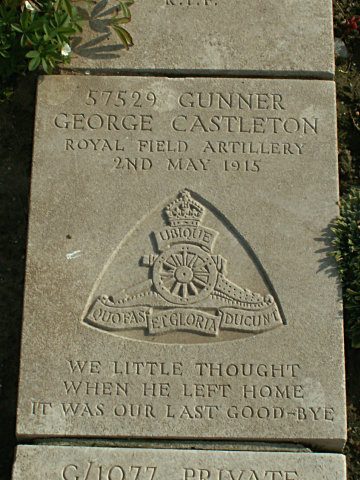 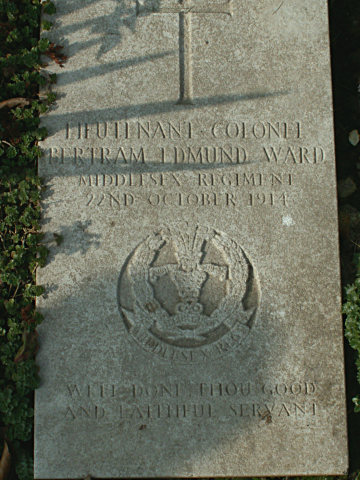 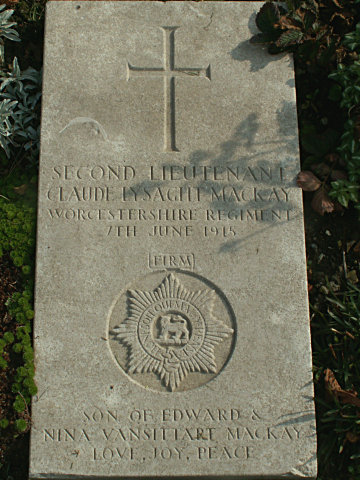 There are four executed soldiers within the cemetery. 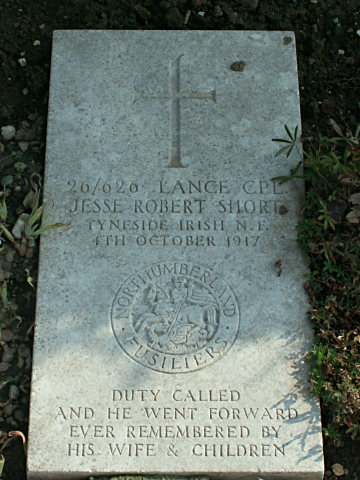 Short had been soldiering since 1905 but without a great deal of success. He had been thrown out as being worthless a number of times and had only weedled his way back in again by lying to the recruiters. Son of a Welsh miner, he declared himself Scottish and joined an Irish regiment.

Short was transferred to the 24th Bn from his recruited 26th and arrived in France in early 1916 in time for the Battle of the Somme. At some stage in 1917 he found himself at the Étaples base and became embroiled in the famous mutiny.

On the afternoon of 9th September 1917 a Kiwi Gunner called Healy had crossed the Canche estuary to visit Le Touquet, which was out of bounds to soldiers in the training base. On returning he realised that the tide had come in and used the bridge, whereupon he was arrested by Military Police as a deserter. Other New Zealanders who witnessed the incident besieged the small police post until one of their number was allowed to inspect the cells and ascertain that Healy had already been released.

The crowd surrounding the post grew and the seeds of discord between the Depot Police and soldiers from the base began to show. Things turned nasty when one of the police, Private Reeve, drew a revolver and shot a Scots soldier dead (Corporal W Wood of the 4th Bn Gordon Highlanders) and wounded a civilian. A mini-riot ensued, and, with the police fleeing, a party went off in search of Brigadier General Thompson the base commander.

About 80 of the soldiers got as far as the bridge between Étaples and Le Touquet where they were confronted by a picquet of 200 soldiers which they brushed aside despite the protests of the picquet’s commander Captain E Wilkinson.

At 2115 hours the party returned through the picquet and the Captain again urged his men to take action. One of the returning soldiers — Corporal Short — harangued the picquet suggesting that they should throw the officer into the Canche river with a stone tied around his neck. That didn’t happen and the Captain made certain that at the first opportunity Short was arrested.

Although some acts of indiscipline continued throughout the week with men heading into town, the so called mutiny was over.

Short was tried together with three other ringleaders. Despite clear evidence to the contrary Short claimed that he had been drunk which impressed none of the officers on the board. Tried and convicted for attempted mutiny Short was not long in the waiting for Haig’s confirmation of the sentence.

Stories of Percy Topliss and the monocled mutineer may have touched the public imagination but it is highly doubtful if Topliss was ever present and Short was the only person prosecuted for this incident.

From his grave’s inscription it is evident that his wife was never properly informed of her husband’s fate. 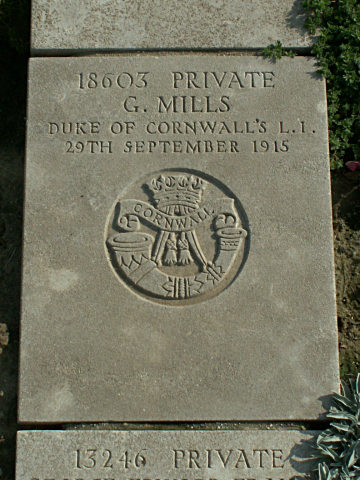 Mills was a volunteer, joining up in February 1915. Whilst his battalion was in the front lines and he was working in the rear, he stole an officer’s uniform and money before going absent. He was found here in Boulogne pretending to be an officer.

He was the first soldier to be tried and executed away from the battlefields. 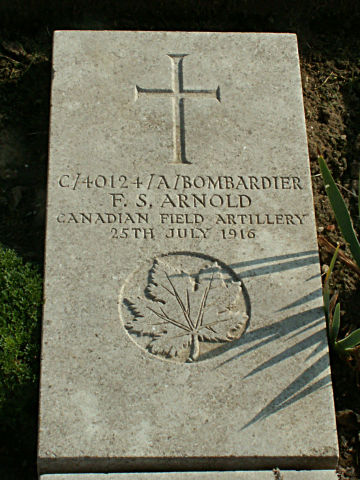 An American with previous service in his own army, Arnold had joined the Canadian Artillery and found himself near Ieper. In June 1916 there had been vicious fighting in and around the Canadian sector and Arnold went missing. He was located in civilian clothes in Boulogne. As with the case of Mills above he was not returned to his unit but tried and executed in the port. 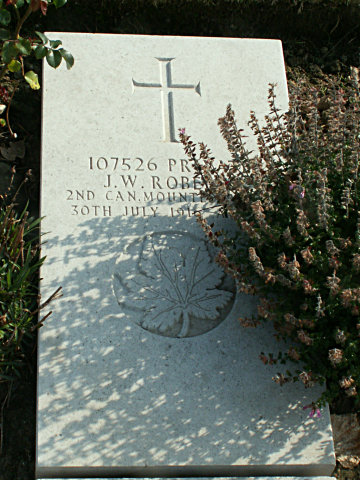 Roberts had gone absent from his unit earlier in the year and managed not only to get to Boulogne but had set up home with a local woman. Unfortunately he was stupid enough to continue drawing his pay so it was hardly surprising that eventually the authorities managed to catch up with him. He was tried on 15th July and shot at 0436 hours on the 30th.