Poperinge is about 12 kilometres to the west of, and easily accessible from, Ieper along the N 308 or by crossing the border from France near Steenvoorde on the D 948. If you have come up from the Channel ports via the autoroute there is a good chance that you have driven through it.

Talbot House is not far from the main square and church along Gasthuisstraat, however, it is entered via a side entrance on Potterstraat.

Poperinge is in Belgian Flanders so the road signs are in Flemish, there can be some confusion near the border coming from France as the frontier criss-crosses the main road. Most town names are easily understood in either language, however Rijsel is Lille and Belle is Bailleul (and Dunkirk is English). 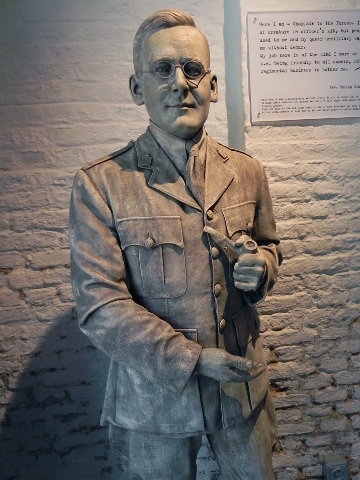 My job here is of the kind I more or less understand
i.e. being friendly to all comers, without any of
the regimental business to bother me.
Tubby Clayton.

The Great War and ‘Pop’

The letter – g – in Flemish is pronounced rather like the -ch in Bach. Following the war, Flemish spelling has been modernised a number of times which has resulted in the removal of the redundant – h – in many town names.

It should be noted that all of our CWGC Cemeteries use the old spelling: Poperinghe Old Cemetery, but Poperinge Communal cemetery

By the end of 1914 the only two Belgian towns still in Allied hands were Ypres (as it was known) and Poperinge.

Apart from a German occupation of a few days in October 1914 the town would remain British for the duration of the war.

If you have arrived here from Calais you have come by a very similar route to that trodden by the thousands of reinforcements on their way to the inferno of the Ypres Salient.

Although the town was not immune from long distance artillery (and eventually aerial bombardment) it did enjoy sufficient safety to make it a centre for hospitals and rest areas.

It’s railway station was one of the busiest of the war and the local estaminets did a fine trade.

A building that became particularly familiar to war time visitors (and long since) was Talbot House or Toc-H.

The Rev. Neville Talbot was the Senior Chaplain of the 6th Division and had been on the lookout for suitable premises for a church clubhouse where soldiers of any rank could get away from the ardours of the war for a moment.

Talbot arranged for a friend The Rev. Philip Tubby Clayton (as round as Talbot was tall) to run the building at No 10 rue de l’hôpital (now 43 Gasthuisstraat) which Talbot had convinced the military to rent for the duration of the war whilst its owner was away seeking somewhere less dangerous to live.

The club was opened on 11th December 1915 and named after Lieutenant Gilbert Talbot, the brother of the chaplain, who had been killed at Hooge on 30th July that year.

Tubby Clayton set out to provide all soldiers with a place where the war and the military stopped at the front door. A sign on his office door reminded visitors that they were to Abandon all rank, ye who enter here. Regardless of their relative positions back in barracks, ordering people about was out of the question.

As the requirements for the house became greater the old hop barn was turned into a concert hall. The pressures on the town can easily be imagined by the fact that a pre-war population of 10,000 Belgians had been joined by almost a quarter of a million anglophone soldiers.

The gardens were a central part of the concept and have since been redesigned and replanted in order to continue the tranquillity of the ensemble.

Following the war the original owner returned to Poperinge and decided to put the old house on the market. With the help of Lord Wakefield (who also bought the Spanbroekmolen Crater) the building was purchased and presented presented to the Toc-H Movement which had been created and based by Clayton on the original idea of the house.

One important addition that had to be made was the furnishing of a bathhouse to cope with the numerous post-war visitors returning to the battlefields.

In 1996 Toc-H was able to buy the old hop store which adjoins the house and in which a concert hall was located to entertain the troops.

Both buildings have been restored and are available to visit for a small fee every day except Monday. It is also possible to stay overnight in one of the rooms. For more information visit their website. Note that the entrance is on the side road.