One of the major scenes of the fighting on the left bank of the Meuse the hill at Mort Homme is situated on a forest lane way leading off the D 38 Road just to the west of the village of Chattancourt. This is perhaps easiest approached by crossing the Meuse at the town of Bras-sur-Meuse on the main D 964 leading north from Verdun. Cross into Charny-sur-Meuse and then follow the signs for Marre and Chattancourt.

Just before turning left into Chattancourt it is possible to continue another kilometre to the village of Cumières — the only Village Detruit on the left bank.

Today a line of cemeteries along the southern base of the ridge graphically illustrates the tremendous fighting, whilst Cumières has disappeared for all time.

On reaching the top of the hill you fill find a parking area just off to the right from the obelisk to the 40e Division d’Infanterie.

Monument to the 69e Division d’infanterie 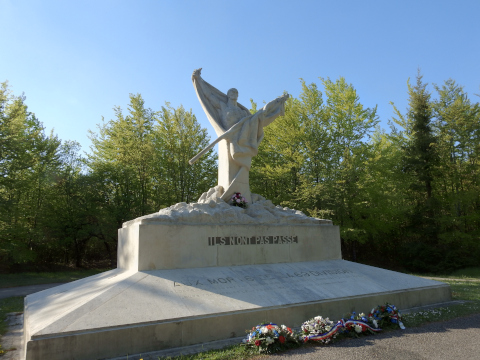 It would take a new year before Mort Homme was taken back by the French 31e Division on 20 August 1917.

Today its summit is masked by a forest of fir trees, the only living thing that seemed able to take root. In the midst of the trees stands a monument to the 69e Division.

Like nothing else you will see on the battlefield, this striking monument by Jacques Froment-Meurice was raised by a Veteran’s Association of the 69e Division d’infanterie.

The macabre skeleton of a soldier throws off his shroud, taking up, with one hand the nation’s flag and with the other the flame of victory. On the plinth is a reminder of the soldiers mantra :

They did not pass.

The hour is decisive. You will not let them pass, my friends, the country asks, of you, once more this supreme effort.

This quickly became the rallying cry of : They shall not pass. 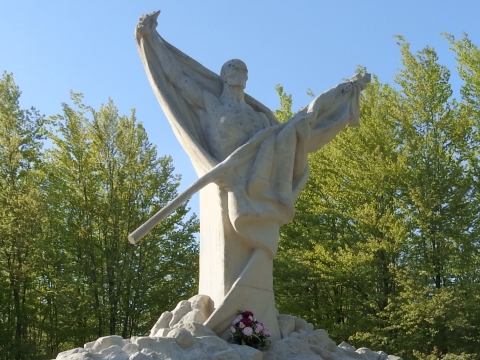 The work began in July 1922 and was finished by the end of August. The inauguration took place on 10th September in the presence of Nivelle himself and amongst others Général Taufflieb who had commanded the 69e DI and was by then athe Senator for the Bas-Rhin.

Amongst those participating was a group of American veteran’s. This was because American troops had started from here in 1918 during the clearance of the Meuse. 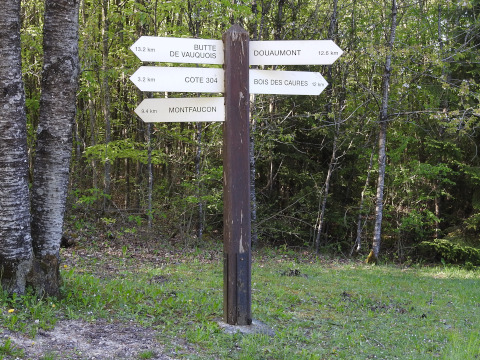 A sign post showing just how close some of the other battlefields are.
Note the American one at Montfaucon. 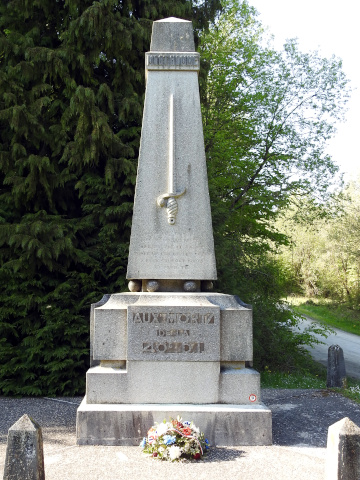 Near the car park and information boards you will see this monument to the men of the 40e Division d’Infanterie who were the other Division at the forefront of the fighting.

To the dead of the 40th Division. Whoever you are, pause and bow, give a little of your heart to those who died here, for you. 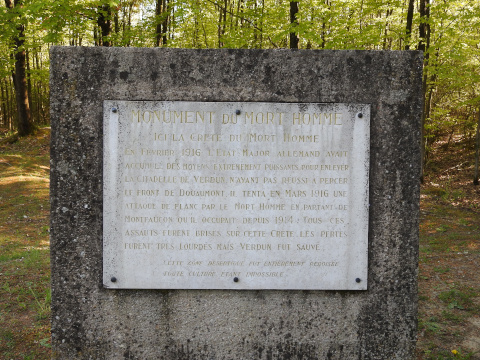 In the turning circle you will see this plaque which reminds us in its last lines that the the ground is no longer capable of sustaining crops. 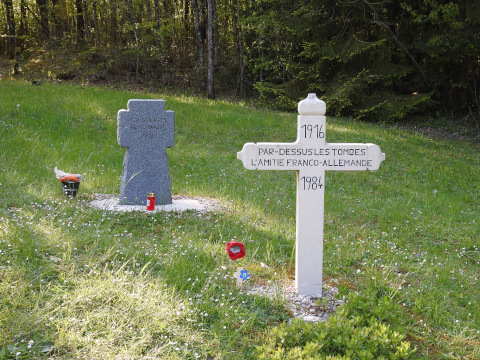 Two symbolic graves, one French the other German.