Mont St Éloi is a village in the Department of the Pas-de-Calais, 8 kilometres north-west of Arras. Écoivres is a hamlet lying at the foot of the hill, to the south-west and about 1.5 kilometres from Mont St Éloi. The Cemetery is on the D49 road.

As you come into the village there is a good parking area right in front of the village cemetery. Park here and walk up through the local cemetery. 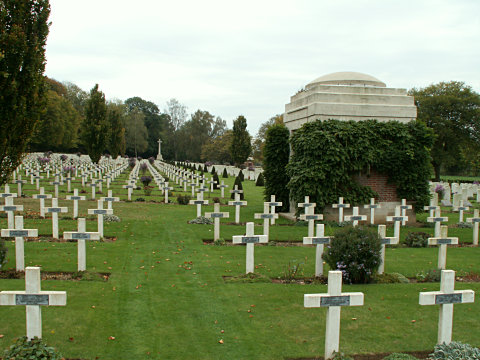 At Mont St Éloi itself you will find burials from the fighting by both the French and British in May 1940 plus two monuments to the French Dragoons in question. The history of the abbey is also explained on panels.

As you walk through the communal cemetery you may notice this rather sadly run-down tomb with its stars and stripes flag.

It is the grave of an American soldier who served with the French Foreign Legion.

Kenneth Weeks who was born in Boston Massachusetts on 30th December 1889 signed up with the Foreign Legion immediately war broke out in August 1914.

He had been studying at the Beaux Arts in Paris and had already become an accomplished writer with a promising future in front of him.

He served in C Company of the 2e Régiment de Marche of the 1re Légion étrangère.

He was killed in action at Givenchy on the Vimy Ridge on the 16th June 1915.

This cemetery is really the extension of the communal cemetery, were the French army had buried over 1 000 men. The 46th (North Midland) Division took over the extension with this part of the line in March 1916, and their graves are in Rows A to F of Plot I.

Successive divisions used the French military tramway to bring their dead in from the front line trenches and, from the first row to the last, burials were made almost exactly in the order of date of death.

The attack of the 25th Division on Vimy Ridge in May 1916 is recalled in Plots I and II. 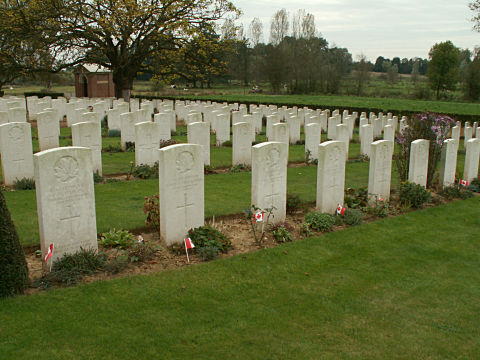 Canadian graves are an overwhelming majority in the rest of the cemetery, Plots V and VI containing the graves of men killed in the capture of Vimy Ridge in April 1917. 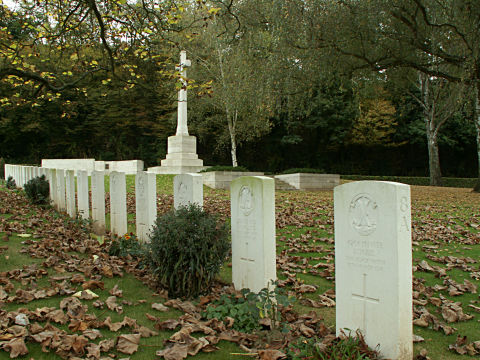 A row of highlanders

After the Armistice, the graves of eight men of the 51st (Highland) Division were brought in to Plot VIII, Row A, from nearby Bray Military Cemetery. 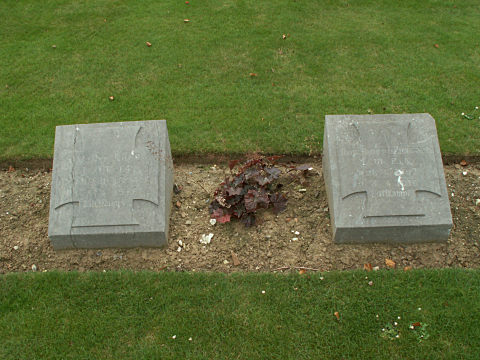 Two of the German graves 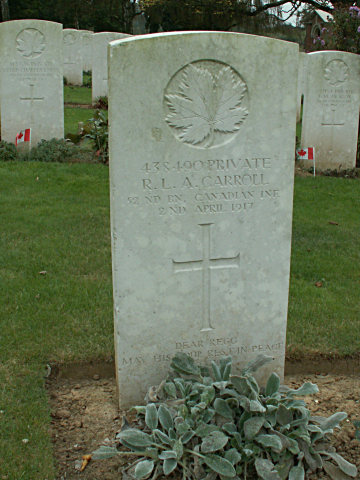 Dear Regg
May his soul rest in peace
Mother 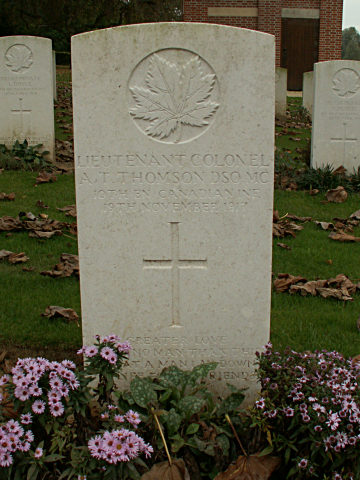 The British in seeking to eliminate a crater system on the Vimy Ridge undertook a small operation carried out by units from the 9th Bn Loyal North Lancs and 11th Bn Lancashire Fusiliers (JRR Tolkein’s battalion).

Four of the officers involved from the Lancashire Fusiliers were killed and lie in this cemetery. 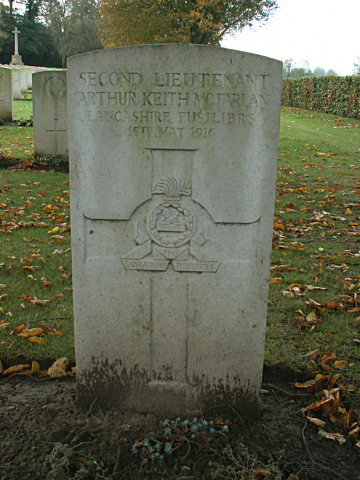 I have photos of all three of these graves.

There are four executed soldiers buried in this cemetery. 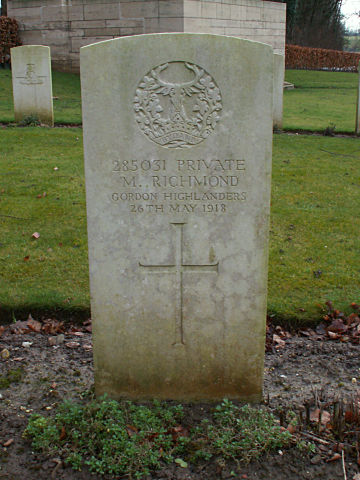 I have photos of all three of these graves.

Malcolm Richmond had been under arrest at Étaples just after the infamous mutiny there. He managed to escape and remained at large until re-arrested in Boulogne a month later. He would escape twice more before finally being collared. With a record like his, it comes as no surprise that he ended his days in front of a firing squad.

James Holland had been in this area in April 1916 when fighting had broken out with the Germans blowing a mine under Holland’s Company. After a brief spell away from the trenches Holland’s battalion was sent back to the front at the beginning of May. Charged with guarding an advanced position with four soldiers under his command, his little party was surprised by a pair of German soldiers entering the trench. Holland ran back shouting that his position had been over run. However the sentry had put the possibly lost Germans to flight. Holland was arrested for cowardice and desertion of his post. Despite a previously good record and a favourable report from his Commanding Officer, he was executed on the 30th May.

Eugene Perry was serving in the 22nd Bn CEF (The Francophone Québec Regiment). He had served well enough from October 1915 up until February 1917. He was given 28 days Field Punishment No 1 (Tied up and put on public display for so many hours a day) for having been absent for a few hours. During this punishment he again absented himself – for under 7 hours. He was convicted of desertion and executed two days after the taking of Vimy Ridge (9 April 1917) during which his battalion had served with distinction. Perry was only just 21 years old and had been absent for less than a total of 24 hours. It has to be said that a glance over the records would suggest that the French speaking soldiers suffered the same excess of executions as the Irish battalions in the British Army.

Dimitro Sinizki had been born in Kiev (Then Russia) but had moved to Canada where he volunteered in Winnipeg in 1915. He arrived in France in February 1917 and joined the 52nd Bn CEF. On the night of the 24th August Sinizki refused to continue towards the front line. This was the second time that he had made it clear that he did not want to go. Although he had a clear record his refusal to mount the lines cost him his life.