Reaching this area takes a little bit of effort as it is not on the main tourist route.

In theory it is possible to get here from Souchez. The road is dreadful — a collection of washed out pot-holes held together by will power. Don’t bother, go up to the memorial.

From the Canadian Memorial Park continue past the monument’s car park for a few hundred metres. There is a riding club and stables on your left and you can park out the front. Walk down the lane way on the left of the riding club. It may well be muddy under foot and you have about a ten minute walk in front of you.

You will eventually reach Givenchy Canadian Cemetery and this is the area of the Crosbie Craters which were just before it and off to your left. 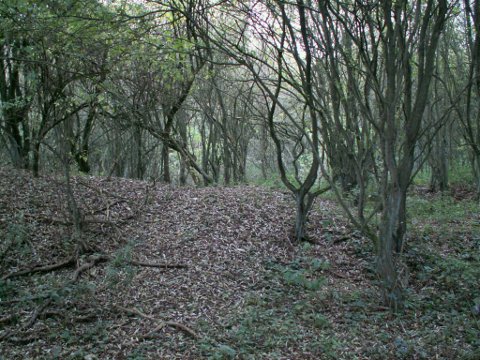 It is private hunting land — so stay out. Nevertheless, the tortured nature of the ground testifies to the struggles here and in one or two places you can see how the trees and undergrowth suddenly drops down metres into large holes.

If you have visited the craters in the Canadian Memorial Park you can probably imagine the effect of trying to live under the constant threat of somebody tunnelling away underneath you.

When the British took over the sector from the French in February 1916 they soon discovered that the German miners had been hard at work. Smiling from the trenches whilst working hard underground.

The tunnelling and mining attacks were a way of life along the entire length of Vimy Ridge and in May 1916 the British 182nd Tunnelling Company were working on a series of small mines right underneath the German trench systems not far from where you are standing.

The British were seeking to eliminate a crater system which the Germans had gained and gave them direct observation into the British lines. This small operation had seven objectives and would be carried out by units from the 9th Bn Loyal North Lancs and 11th Bn Lancashire Fusiliers.

The 9th Loyal North Lancs were to seize a crater on the left and on which they already had a partial presence. The 11th Bn Lancashire Fusiliers had not only to seize a crater immediately to the right of this first crater, but also five others that would be blown under the German lines.

These five new craters were labelled, V and W on the left, and a further group; X,Y and Z on the right.

Poor weather for the previous forty hours had hampered German aerial reconnaissance in picking up the forward movement of those taking part.

Organisation of an assault

The Operational Order of 11th Bn Lancashire Fusiliers gives an interesting insight into the planning.

On the far right at Crater Z, 2nd Lieutenant McFarlan was in charge of the assault party with 8 Bombers (soldiers with grenades), 4 spade men, 2 loophole men, a Lewis Gun team and a signaller.

Immediately behind him were an officer and 40 men from the Royal Engineers and 6th Bn South Wales Borderers (Pioneer Battalion) to consolidate the position. These would be further aided by 2nd Lieutenant Hatfield with 27 Fusiliers and 4 Engineers to carry out the digging and wiring.

At 2027 hours the British Artillery opened fire on their opponents battery positions and at 2030 hours (Precisely, the records note), the mines at X, Y and Z were detonated. A German machine gun immediately opened fire but this was silenced ten seconds later when V and W were exploded.

Within seconds the German artillery barrage opened fire on the British support, reserve and communications trenches and in particular Zouave Valley (which is the valley between the cemetery and Souchez).

Something that the Brigade Commander : Lt Colonel Crosbie had noticed was that in general the German Artillery tended to respond to his own. By curtailing his own bombardments he found that whilst the German guns didn’t become silent they certainly slackened their rate of fire.

On the left the 9th Loyal North Lancs rushed forward and seized their objective with little difficulty. They had soon formed a chain gang towards the rear to bring up sandbags, equipment and replenished Lewis Gun magazines.

On the right 2nd Lt McFarlan was killed almost immediately at Z Crater and his role was taken over by his NCOs.

The left hand group of craters, V and W proved moderately easy to overcome and by 2050 hours they were in the hands of the Fusiliers, who soon established contact with the Loyal North Lancs on the left. They also, however, lost both their officers in taking the two craters : Lieutenants Barrett and Jewell.

The Germans were of course disinclined to let the matter rest there and tried for the next couple of hours to retake the lost ground with a stream of counter attacks but all were beaten off.

As soon as the lips of the craters had been secured the working parties set to work digging new communication trenches and solidifying the defence works. The task was completed before dawn.

In tribute to their Commanding Officer who was temporarily in command of 74th Brigade the Fusiliers named the new craters as the Crosbie Craters.

Young McFarlan and his three fellow officers who were killed in the mission are buried at Écoivres near Mont St Eloi, the ruined abbey of which you can see in the distance from the Canadian Memorial.

The British did not enjoy their new found position for very long for six days later on the 21st May, the German Commander General Alexander von Freytag-Loringhoven launched a blistering assault along this general area.

Freytag-Loringhoven was in fact one of General Falkenhayn’s senior staff officers who had decided that he wanted to get some experience at the front. Chance led him here, where he soon realised that the constant mining by the British was irritating his men.

As the German tunnellers were being beaten at their own game, Freytag-Loringhoven reasoned that the answer was to retake not only the trenches but also the mine shafts that accompanied them.

If by attack we could throw back the British over the position we had held until the end of September 1915, and so rob them of all their mine shafts, and hold the position won, we should have tranquillity.

British intelligence (getting ready for the Somme of course) suggested that the Germans were not in a position to carry out an attack in the area and it was decided to go ahead with significant alterations in the local command.

On the night of the 19th/20th May, there was a complete change in command in this sector from Army right down to Divisional and garrison levels. One moment the controlling command structures were the British Third Army and XVII Corps, the next it was the First Army and IV Corps. The 25th Division moved out and the 47th Division moved in.

The following morning, the 21st, Freytag-Loringhoven launched his offensive.

47th Division had swiftly discovered that what they had inherited was a wet wasteland overlooked by an enemy who could destroy any amelioration as fast as it was implemented.

At 0500 hours the German guns opened fire pausing for a few hours at 1100 hours before going up a gear at 1500 hours. General Alexander Baron von Freytag-Loringhoven had been quite happy to use a bit of influence and was employing eighty batteries of artillery over a front of only about 1500 metres.

The Germans rained about 70,000 rounds into all of the British trenches along this small section of the front, and then at 1945 hours detonated a mine. Moments later the infantry attack began.

On their left the Germans swiftly battered their way into the British front line and with relative ease pushed them down the hill. It was only the threat of running into their own barrage that finally brought them to a halt.

To the right the attack made progress but met with stiffer resistance.

The British took shelter in Zouave Valley and weathered the storm whilst trying to plan an effective counter attack. However, on the 23rd, a carefully placed German bombardment fell on all of the assembly areas — the Germans had been tipped off by a deserter.

Having attained what they had set out to do the Germans were content to leave it at that and General Haig concerned with the planning for the great offensive of The Somme was disinclined to risk getting embroiled in a distraction. Thus the situation settled and the lines would remain much as they had become until April 1917 when the Germans would be pushed off the great ridge — once and for all.