The task of taking Vimy Ridge fell to the Canadians who would have all four of their Divisions fighting side by side for the first time.

Their commander: Lieutenant General Sir Julian Byng had a seven kilometre front to assault, including Hill 145 which rose 61 metres above the start line.

The hill was known to the French as Cote 140 but better mapping
had shown it to be five metres higher — Hill 145. 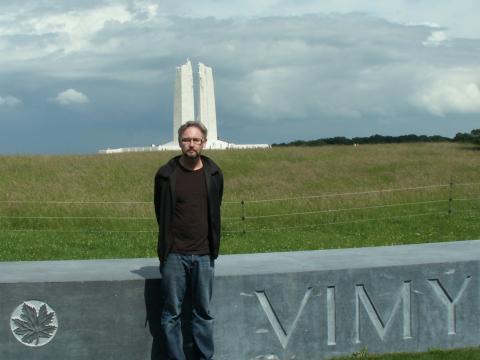 The Germans had been in possession of the ridge for over two years and had made the most of their time. Deep bunkers could shelter thousands of troops from any bombardment and their trench system had been fortified with concrete pill boxes concealing machine-gun positions.

The Canadians, for their part, arrived in late 1916 following their ordeals on the Somme. In front of them was a lot of hard work and labour during the coldest winter of the war.

Training was the watchword. If intelligence could be gained about the enemy positions and units, if the topography could be recreated for training purposes, and if every man in those assaulting waves knew his exact task and what was required of him: victory would follow.

The steeper section of Vimy ridge seen from Lorette. As can be seen, it gets lower as it recedes to the north-east
The Canadian Monument is visible on the left. Between the two ridges is the Souchez valley

If the Germans had reorganised their defensive strategies following the Battle of the Somme the Allies had also been learning lessons. Major General Arthur Currie commanding the Canadians’ 1st Division was one of the officers from the British Army to have visited Verdun. What he and British officers understood was that control on the battlefield needed to be rethought. Far more autonomy needed to be given to Platoons.

During the Battle of the Somme there had been a lack of comprehension at the lower levels of command. The ordinary soldiers did not understand what their objective was, nor how to achieve it — that was left to the officers leading them. However, as soon as the officer was killed everything would stop until new orders arrived.

This proved to be a great problem due to the high casualty rate amongst the officers. From now on, instead of trying to coordinate its Companies (a battalion consisted of four) it would work more at the Platoon level (a Company had three). The Lieutenants and Non Commissioned Officers (NCOs) leading the Platoons would have as much information about the task in hand as their superiors at Company level.

This was not a Canadian invention, the French planning in 1915 had been very similar and the British were working on the same principles in their planning for the attack against Messines in June 1917. It was more a case of having well organised Generals backed by an excellent administrative staff. It was also a case of having artillery and reserves readily at hand. 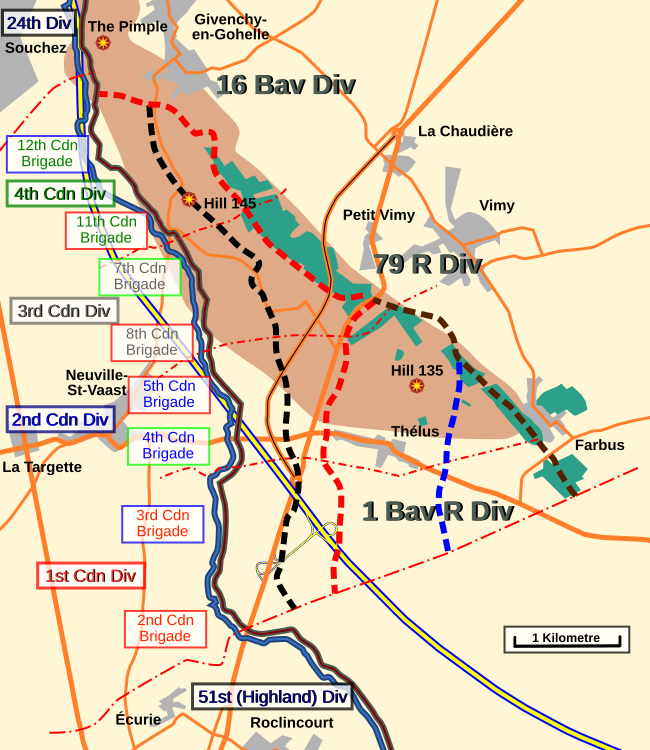 The Canadians’ objectives (NB. The maps in this series concern themselves solely with the Canadian Corps)

It is very easy to look at the ridge and think that all four Canadian Divisions had the same task, but this is far from the truth.

Try and think of two lines joined at the top, running north to south and north to south-east. The first represents the two front lines and the second Vimy Ridge.

The Canadians Divisions were formed up in numerical order from 1st Division in the south to the 4th in the north. 1st and 2nd Division had a lot of open ground to cover before they would pull up alongside the 3rd and 4th who were taking on the highest parts of the ridge.

The area of the trenches and tunnels that you can visit today fell within 3rd Division’s area. The area surrounding the monument would be taken by the 4th. 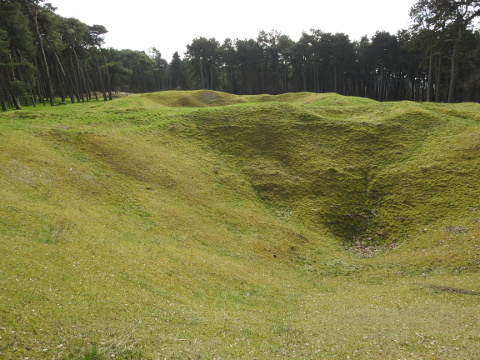 The results of the underground warfare at Vimy

For years the French, British and Germans had been carrying out an underground mining war, leaving a lunar landscape and the vestiges of numerous tunnels. These tunnels were extended by the Engineers to provide a system of delivering assaulting troops right into the heart of the battle. 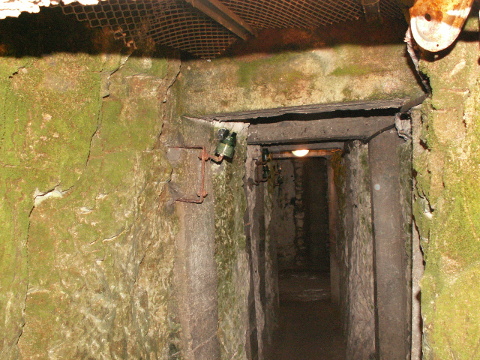 The electric cable holders are evident in the Grange Tunnel

Five kilometres of tunnels were built to shelter soldiers before the attack, some quite short, others running to over a kilometre in length. Some were equipped with water and electricity. Chambers were cut to provide space for Headquarters troops, communication points and dressing stations.

Above ground, roads were repaired and light railways built.

Behind the Canadian lines each soldier was sent to training grounds. Here he would see the trench systems recreated from the very latest aerial photos. This would give him an idea as to the ground he would be fighting over. He would know where to find the machine-gun posts and the bunkers.

There was training on gas-masks, fighting with the bayonet, the machine-gunners worked with their Lewis machine guns, the bombers trained with their grenades (known as bombs at the time). Above all, they were trained to work in formations : Battalion, Company and Platoon.

Chaps, you shall go over exactly like a railroad train, on time, or you shall be annihilated

The infantry were as prepared as they could be but the leader of all these battles was the artillery. It was them that ravaged the ranks of the enemy, everything depended on their ability to silence the enemy guns, crush the bunkers and flatten the wire, the length and breadth of the ridge.

In order to ensure that the bombardment would be as powerful as it could be, General Horne, commanding the First Army, allocated his heavy artillery to the Canadians.

Seven of the nine groups of heavy artillery used in the Canadian bombardment were British and, in addition, thirty thousand British gunners were assigned to the Canadian Corps.

French failures in 1915 had been put down to a lack of artillery and the Canadians had no intention of being accused of the same failing.

Lessons had been learnt from the Battle of the Somme, where the greatest barrage ever put down by British Artillery had been found to be wanting on 1st July 1916.

The Canadian Corps would employ thirty times more pieces of artillery than the French had used two years before. More than 350 heavy guns and 700 field guns would provide one heavy gun and two field guns for every twenty metres of front to be attacked.

One of the other problems at the Somme had been the lack of a shell fuse that was sensitive enough to explode on contact with barbed wire. The British had resorted to using shrapnel shells in the hope that the flying pieces of metal would cut the wire — often the shell went into the ground before exploding and the wire remained uncut.

A new, sensitive fuse, called a “106” had been introduced and this was just the trick for barbed wire entanglements.

From the 2nd April the Canadian bombardment increased its rhythm as it fired off about a million rounds.

The French fired 30,000 rounds for their assault on 9th May 1915 ! At that time it was probably the heaviest bombardment ever laid down. Now it was hardly a daily assignment.

For General von Falkenhausen, on the ridge, it was quite clear that an offensive was in the offing. His soldiers had to hang on but the ferocity of the bombardment prevented all attempts to bring up food and water, carry out front line reliefs.

Sleep was impossible. The shelters were flattened, rats fled the trenches as the ground was pummelled incessantly.

Defence in depth, the key to the German ideology. Von Falkenhausen had confidence in his men and made the decision to leave his reserves in the rear areas. He counted on having enough time to spot any breaches and bring up reserves as required. In any case, there was nowhere to put the reserves close to the ridge that was out of view and out of artillery range.

In reserve the Canadian Corps was given the British 5th Division which brought the strength of the Corps to about 170,000 men of all ranks. Amongst them were 97,000 Canadians.

On the evening of 8th April 1917 fifteen thousand infantrymen moved up from the rear lines near Mont St Eloi towards their compatriots already holding the Vimy front. Along the length of that front the Engineers had been hard at work and finished their tunnels. Some were used as Battalion Headquarters, such as the Douai Tunnel on the front of the 15th Battalion. Others were fighting tunnels designed to shelter the soldiers until the last moment and then lead them almost directly into the German positions. 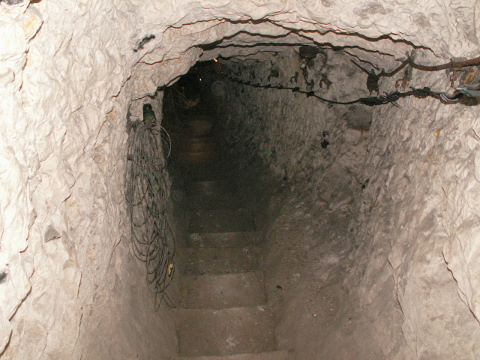 The Grange Tunnel can be visited throughout the summer season

The most well known of these fighting tunnels is the Grange Tunnel which you can visit at the Memorial Park.

A little before dawn the temperature dropped again and a strong north-westerly wind blew across the battlefield covered in snow and ice.