From the Canadian National Memorial Park, return into the village of Neuville St Vaast and turn left at the Mairie (the main junction near the church). Follow the road out of the village and past Zivy Crater Cemetery. As you reach Thélus the monument is immediately in front of you at the traffic lights. The road crossing in front of you is the Rue des artilleurs canadiens.

From Arras simply follow the D 917 towards Vimy town (Not the memorial which is actually in Givenchy en Gohelle). Just after you pass the two CWGC cemeteries on your left you will come to a roundabout and the Vimy by-pass : continue straight on down the Rue des artilleurs canadiens. You will reach the crossroads and memorial within a few hundred metres. 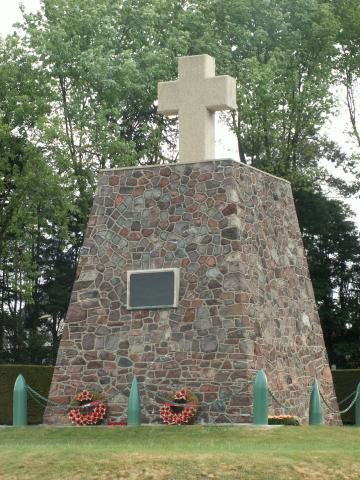 The failure of the French to retain possession of Vimy Ridge on 9th May 1915 could be put down to two things : the reserves being too far back and the inadequacy of the supply of munitions to the artillery. Each of the 75 mm field guns was limited to 300 rounds and by the time that the Germans started to retaliate in the mid afternoon, that stock was almost exhausted.

Whilst the British failure at Aubers Ridge that same day caused a Munitions Crisis in London, the fact was that the French were also suffering from poor manufacturing and a supply that was showing itself to be insufficient for the task. It would take almost two years for the French and British munitions services to overcome production problems and create sufficient numbers of guns and shells to finally overcome the Germans’ hitherto superiority.

It was clear to General Horne, commanding the British First Army, that if the Canadian Corps was to have any chance of taking (and more importantly retaining) Vimy Ridge it would need all the artillery support that it could muster. For that reason he allocated his own heavy artillery to the Canadians.

Seven of the nine groups of heavy artillery used in the Canadian bombardment were British and, in addition, thirty thousand British gunners were assigned to the Canadian Corps.

The Canadian Corps would employ thirty times more pieces of artillery than the French had used two years before. More than 350 heavy guns and 700 field guns would provide one heavy gun and two field guns for every twenty metres of front to be attacked.

The cross was inaugurated by General Sir Julian Byng on 9th April 1918.

It carries the emblem of the artillery — a canon supporting the crown — and the motto of the gunners :

The inscription acknowledges the part paid by the artillery that supported the Corps during the battle.