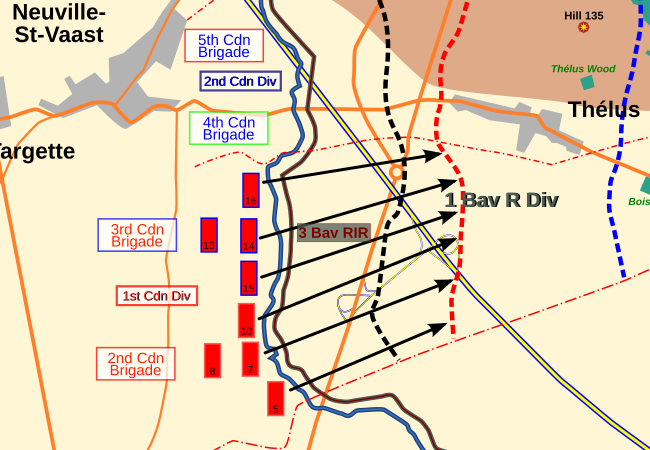 The initial attack by the 1st Canadian Division

On the right of the Canadian Corps, the 1st Division under the command of Major General Currie attacked along a front of about two kilometres with six battalions. By far the furthest from the ridge they had some four kilometres of battlefield to cross in order to reach it !

The section of front held by 3rd Canadian Brigade, the high part of Vimy ridge is off to their left

For them there was no steep slope, the ground was pretty flat and somewhat perversely the Highlanders of the 15th Battalion started their attack downhill ! The distance in this sector was too far for the first wave so, here, the two front-line Brigades (2nd on the right 3rd on the left) would advance as far as the Red Line (because it was marked in red on the maps). From there the 1st Brigade would continue to the Brown Line.

Having crossed no-man’s land they arrived at what was left of the Germans’ front line, encountering very little in the way of resistance. The muddy ground that had been ploughed and re-ploughed by the days of shelling made it hard going for the infantrymen, in particular for those of them wearing kilts.

The section of front held by 15th Bn. The Arras Road is immediately in front, the modern autoroute interchange on the right
The village of Thélus on the left and Vimy ridge off on the horizon. The cemetery is Nine Elms Military.

A hundred metres from the Arras-Lens Road lay what was known as the Zwolfer-Graben, the Black Line. The Canadians reached it within forty-five minutes with few casualties. The opposing Bavarians were either shell shocked or dead but even so there were still a number of strong points that resisted.

The 14th Battalion (Royal Regiment of Montreal) found itself exposed to four machine-gun points and the Bavarians were showing themselves to be just as courageous as the Canadians.

The battalion suffered 265 casualties from its strength of 701.

Having reached the Black Line the Canadians paused for forty minutes so that the artillery could continue its work and also to ensure that the bound to the Red Line would remain coordinated.

Despite all of their training, the actual attack had become disorganised but the decision to instruct everybody in the objectives paid dividends as isolated groups of soldiers knew what they were at. Casualties rose in the advance to the Red Line but nothing was stopping the 1st Division. 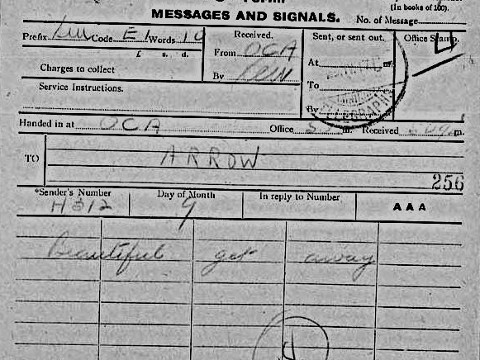 As the commander of the 15th Battalion says — Beautiful get away. 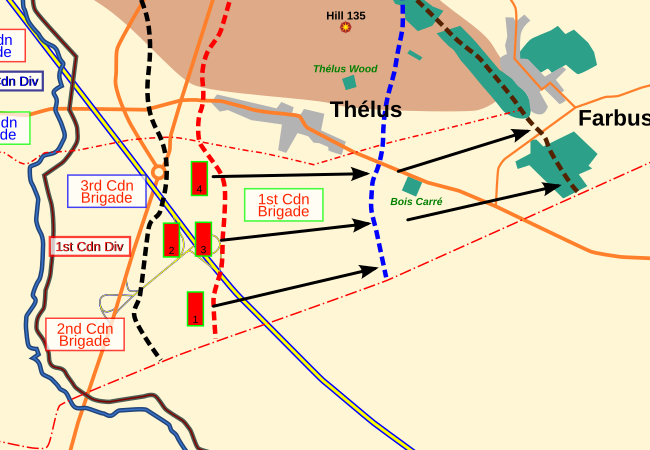 The final attack by the 1st Canadian Division

It was now the turn of the 1st Brigade.

It passed through the other two Brigades whilst the artillery dropped thousands of rounds on the Blue Line.

At 0935 hours the attack recommenced.

The wind started to turn, blowing the snow and smoke from the now burning village of Thélus into the faces of the Bavarians helping to hide the approaching Canadians.

The Brigade used three of its four battalions who once more encountered little resistance. After the shock of the morning’s bombardment the defenders were demoralised, or at least those that had survived the shelling were.

Here the 1st Battalion formed a defensive flank. The two other attacking battalions continued towards the Brown Line at 1226 hours, behind a renewed bombardment.

The 1st Division had crossed four kilometres of battlefield, captured 2,500 prisoners, 40 machine guns and 27 canon. In doing so they had themselves suffered 2,500 men killed or injured.