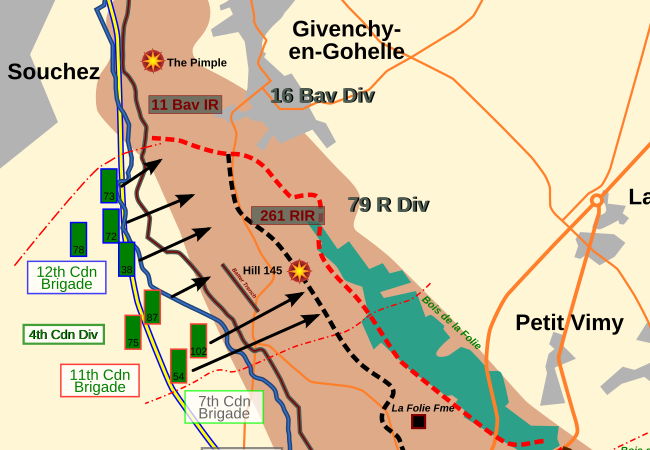 The initial attack by the 4th Canadian Division

At his headquarters General Horne was more than content :

Byng has done very well indeed and the Canadians have fought splendidly !
Must now take care to keep it.

The Souchez valley from the ridge. The chapel and lighthouse of Lorette on the hill opposite

Hill 145 formed the primary objective for the 4th Division of Major General Watson. It was the highest point on the ridge and thus the most important. Whilst it was still held by the Germans their observers could see everything in the Souchez valley below them — behind Watson’s own front line.

Watson hoped to take the German front line by surprise and then wipe out all counter-attacks with artillery and machine-gun fire.

The bombardment had certainly destroyed most of the trenches but the garrison had been somewhat protected by their deep dug-outs.

The 11th Brigade had THE task, one could say, to take Hill 145. On the left the 12th Brigade would take the German first line system and then form the defensive left flank for the entire Corps (and effectively for the Battle of Arras).

At 0530 hours, as elsewhere, the rolling barrage began its work and the Division went over the top. The 102nd Battalion reached the Black Line at 0640 hours but the fighting was extremely bitter and the battalion lost many of its officers leaving the command for a moment in the hands of a Sergeant Major.

They suffered 314 casualties going forward but held their newly won position. The 54th Battalion moved up with the intention of carrying the attack to the Red Line but were nailed to the floor by enemy fire.

The 11th Brigade had taken the decision, before the battle, to use one of the German trenches as its forward Headquarters and for that reason they didn’t shell it. The trench, known to the Canadians as Batter Trench, housed a number of machine-gun posts which ripped apart the 87th Battalion as soon as it left its trenches.

In front of the 12th Brigade two mines were detonated at 0530 hours killing most of the defenders facing the 73rd Battalion. The Brigade’s three attacking battalions took the German front line without any problems and the 73rd formed the protecting left flank.

The other two battalions found that the ground had been so badly torn up that they were having to slither and crawl between shell holes. Inexorably the infantry lost contact with their protecting barrage. Some craters were so deep that any soldier falling in would be lucky to climb out again. Many simply drowned in the mud at the bottom.

By midday the 4th Division’s attack was in confusion and the casualties mounting.

Luckily for the Canadians, von Falkenhausen had not understood the severity of the situation. He was still expecting his men to hang on and was marshalling his reserves for a drawn-out battle as opposed to launching immediate counter-attacks. The decision cost him the ridge. 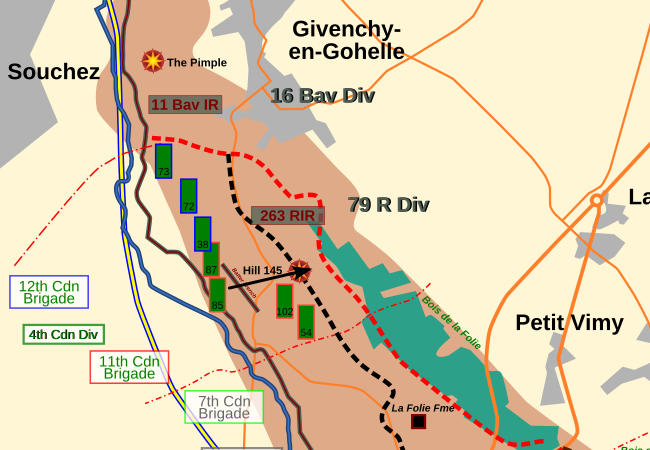 The final attack by the 4th Canadian Division

Late in the afternoon Watson sent up two companies of the 85th Battalion (The Nova Scotia Highlanders). These were the Divisional Pioneers who had never been in battle and were so new to the war that they had not even received their kilts — a source of extreme humiliation for a unit of so called Highlanders.

Lieutenant Colonel Borden went forward and looked at the German fortifications. Having done so he made the remarkable decision to send his men in without artillery cover, fearing, as nobody seemed to know exactly where anybody was, that any bombardment would shell Canadians.

At 1800 hours the two companies of the 85th were in position.

Bayonets were fixed but the order cancelling the artillery hadn’t actually reached the officers and they were somewhat stupefied when at Zero the shelling stopped.

Despite their surprise at the turn of events, the order was given and the men went over the top, at first in silence and then screaming Scottish battle cries they fell upon the Germans on Hill 145. For ten mad minutes the Germans held them off but the Nova Scotians were not for stopping.

An audacious bayonet charge led by untried troops had broken the back of the whale.

The view overlooking the northern side of the ridge — out towards the Douai plain
The great crassier on the left marks the battlefield of Loos 1915, the white tower on the right that of Hill 70 in August 1917

The following day two battalions from the 10th Brigade relieved those of an exhausted 11th and took the advance on to the Red Line.

Vimy Ridge belonged to the Canadians.

Vimy : The Pimple
Map : The ground gained
The Battle of Arras: 9th April 1917