The chapel and lighthouse tower at Notre Dame de Lorette dominate the ridge for which the French fought a long and bloody series of battles.

Situated just off the D 937 north of Arras it can be seen quite clearly as you travel towards Arras along the A26 from Calais; from Vimy Ridge which sits opposite and from as far afield as the Loos battlefield and Hill 70.

A superb point of reference in this area is the TV antenna at Boyeffles a few kilometres along the ridge to the north. 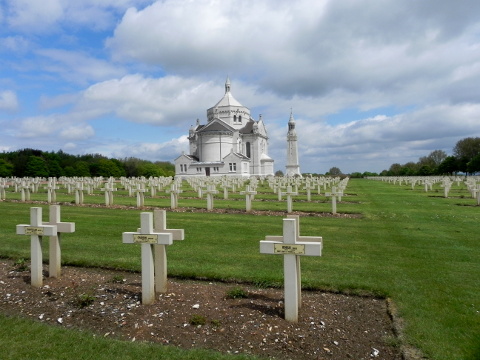 The original oratory at Notre Dame de Lorette was raised in 1727 by a painter called Nicolas Florent Guilbert. A native of the village of Ablain Saint Nazaire, in the valley below, he had made a pilgrimage to Loreto in Italy and been cured of his illnesses.

On his return home and in gratitude for his cure he raised a small oratory, on the hill above his village, in order to shelter a statue of the Virgin Mary, which he had brought back from Italy. In typical French style Loreto was translated into French and became : Lorette.

The oratory was destroyed in 1794 (French Revolution) but rebuilt in 1815 before being transformed into a small chapel in 1880.

The battle for the chapel and this imposing hill, which rises about 165m above the neighbouring ground, raged for twelve months from October 1914 until October 1915. 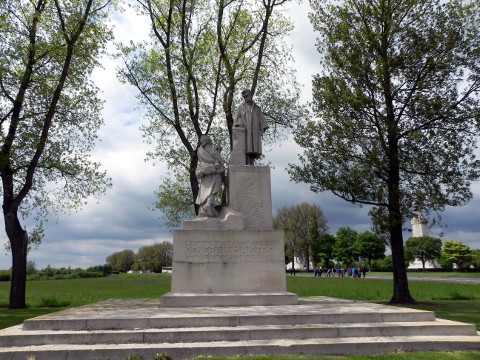 Opposite the main parking area at the front of the cemetery is an orientation table and a statue to Général Paul Maistre the commander of the 21e Corps d’Armée who took the hill. 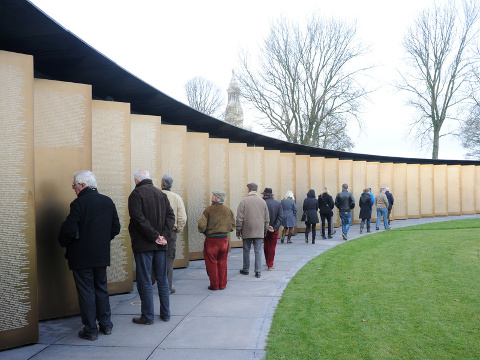 Opened on Armistice Day 2014 the International Memorial Ring is situated on the hillside overlooking Ablain Saint Nazaire — just behind the General’s statue.

I remember my first visit here one typically bleak winter afternoon. The rain pouring down, the surrounding fields a sea of ploughed mud, and a wind that cut you to the bone. It was constantly in my mind as I slowly became soaked to the skin that at least I was going to have the luxury of getting back into my car and drying out. Something that the soldiers who fought here could only have dreamed of. 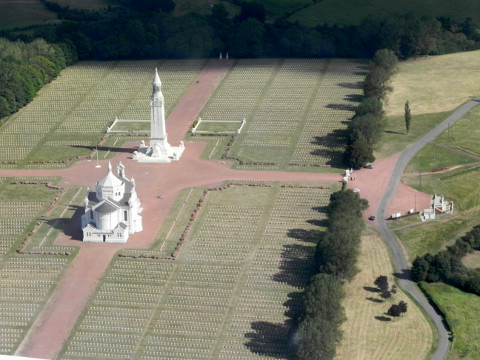 The initial sight of this enormous 13 hectares cemetery is imposing, but as you begin to walk around, its size seems to grow as the eye catches yet more crosses as you realise that you are standing on the crest of the hill. To put its size into perspective the surface area is about the same as eighteen soccer pitches.

The army gathered up all of their dead from the battlefield with the exception of La Targette (With its 11,000 graves) and a few other smaller cemeteries including that at Hébuterne containing soldiers killed in the diversionary attack on 7th June 1915.

Each was given a similar grave—including Général Barbot of the Alpine Corps (Who is buried close to the main entrance). At the far end of the same row as the General is a double grave: that of Anatole and Edmond De Sars, father and son, killed in 1914 and 1940.

The original wooden crosses were replaced by cement crosses in 1933, and, having been painted black these were used in the German Military Cemeteries which at the time were still in the care of the French authorities.

The 19,000 identified graves with their crosses or headstones are joined by seven mass graves. The ossuary under the lantern tower contains the remains of 6,000 soldiers collected from the hill itself whilst seven other mass graves contains unidentified remains from other defined areas.

All told there are approximately 42,000 burials on this site (the actual figures differ from source to source). A further 12,080 identified soldiers were returned to their families for private burial.

Sadly attacks on the Muslim graves forced the authorities to install CCTV and close the cemetery at night. It should also be noted that the chapel closes throughout the winter months.

An ossuary is a room or container in which the bones of dead people are placed—as opposed to them being buried. The first stone was laid by Maréchal Philippe Pétain on 19th June 1921 preceding four years of construction before the inauguration on 2nd August 1925 by Paul Painlevé (président du Conseil—Prime Minister) in the presence of 50,000 spectators.

The lantern is 52 metres high on a 12 metre square base. At night the 3,000 candle power lamp revolves every 12 seconds and can be seen up to 70 kilometres away. 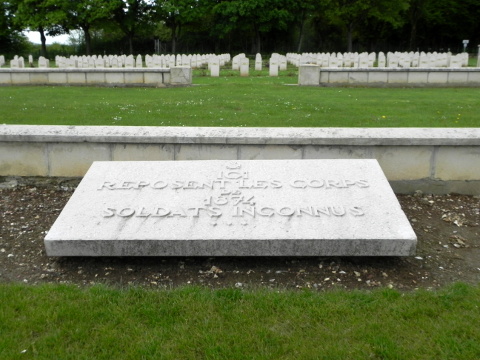 One of the smaller mass graves. Behind are the Jewish and Muslim plots

Immediately on entering you will see a marked tomb on the floor. The simple inscription states that here lie the remains of thousands of soldiers—in fact about 6,000 unknown soldiers.

Steps lead you upwards to a small museum showing personal items and the history of the construction.

The hommes en béret are there every day to watch over the ensemble and to help visitors with information. They are made up of ordinary citizens who have taken an oath to attend the Ossuary at least one day each year. Their intention is to represent through their own ordinariness those who lie here at Lorette.