Neuville-St Vaast is a village 6.5 kilometres north of Arras, a little east of the road from Béthune to Arras. The German Military Cemetery is clearly visible on the northern side of the road.

It is well sign posted on the edge of the village and there is adequate parking. Although there are toilets here I have never seen them open.

It is the largest German Military Cemetery in France with 44,533 burials. 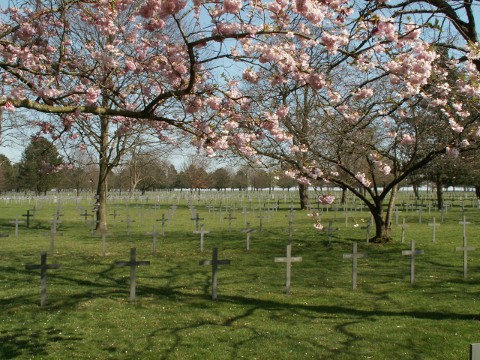 Like most other German cemeteries it is a concentration cemetery. The fighting in this area was particularly bloody and bodies continue to be found in and around the area—many were recovered during the building of the A26 autoroute through the Vimy area.

There are members of over a hundred different units and corps lying here most of whom lost their lives in the heavy fighting for the Lorette and Vimy Ridges during 1915 and 1917. 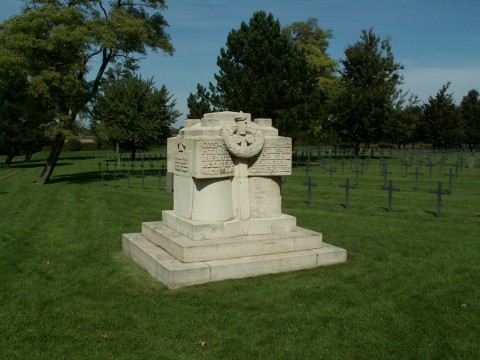 The Monument to the Hannover Inf Reg No 164

One of the monuments brought here from another cemetery is that of the Hannover Inf Reg No 164 which was made by the soldiers during the war. 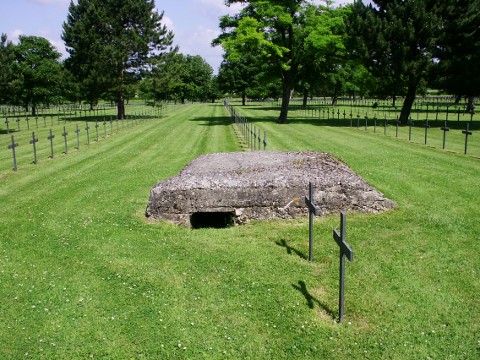 One of the original defensive bunkers

The land here is chalk and the original cemetery has received a lot of care and attention to bring it to the fine condition that it is in today. Most of the work was carried out by volunteer youth groups, who helped plant the trees and shrubs as well as tending the malnourished soil. 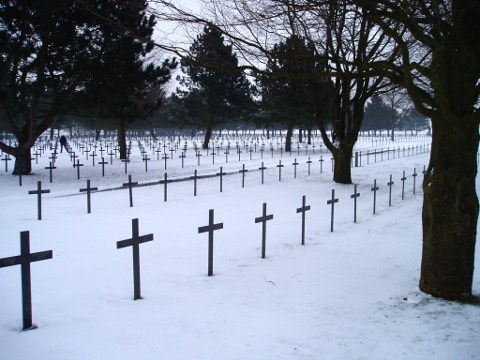 In winter the cemetery is reduced to black and white

The municipality of Neuville St Vaast donated a wooden cross with the inscription Paix aux Hommes de Bonne Volonté (Peace to men of good will). It was set up in the middle course where today’s high cross is (a reproduction is at the outside wall of the new entrance building). 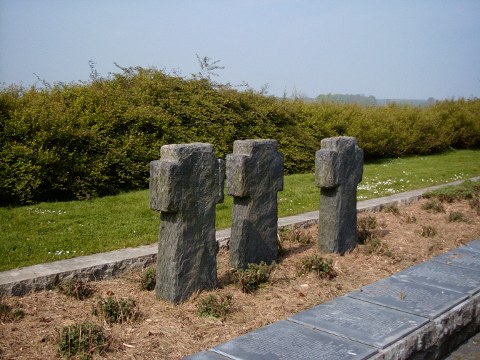 The Mass grave on the left of the entrance

In 1974 the German Army and Youth Organisations began the four year task of moving the 10,000 concrete posts for the new crosses. Each of these bases weighs about 35 kilos. Slowly the old wooden crosses were replaced with new metal ones each engraved with up to four names. 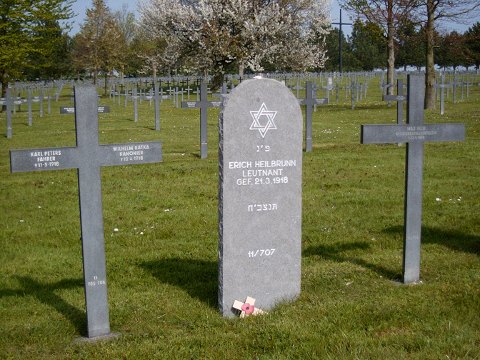 Jewish soldiers received a headstone and 129 of these are scattered about the field.

A mass grave 140 metres long which is situated along the front wall of the cemetery holds the remains of 8,040 soldiers. The names of the 842 identified bodies are marked on the metal plaques. 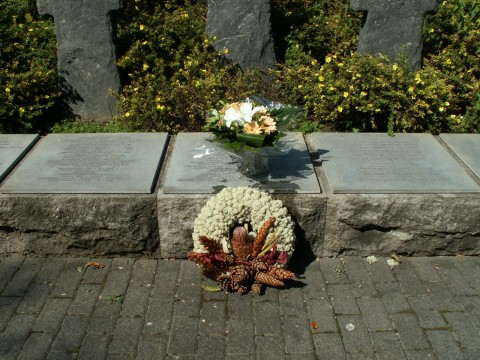 A German wreath on the mass grave

Inside the entrance gate is a stone relief which not only marks out the location of the battlefield but also the cemeteries in the immediate locality—German, French, Commonwealth and Czech. Perhaps a total of 200,000 dead.

Almost nothing but black crosses as far as the eye can see,
but even here you can see headstones of Jewish soldiers

With its sombre black crosses this cemetery is particularly thought provoking. Of the many places on the Western Front Tourist Route this is one that should not be missed. For me, the impact of this enormous field of graves is at least the measure of, if not greater than, that of Tyne Cot or Etaples.

At St Laurant-Blangy on the far side of the battlefield next to the CWGC Bailleul Road East Cemetery you will find another huge Soldatenfriedhof with over 30,000 more burials. 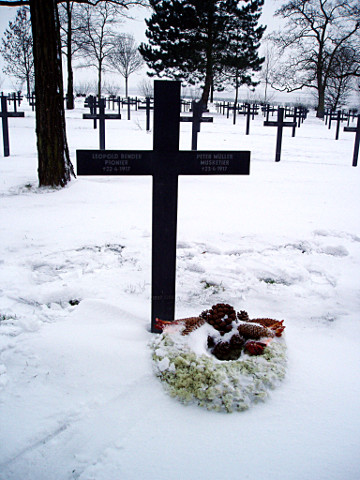