Neuville-Saint-Vaast is a village 6.5 kilometres north of Arras, a little east of the road from Béthune to Arras (D 937). On arriving at La Targette continue past the first crossroads where you will glimpse the huge French Military Cemetery off to your left. A few hundred metres further along turn right at the next crossroads. It is possible to park a vehicle on the right-hand side

Continuing straight on will take you into Neuville-Saint-Vaast and on to the Vimy Canadian Memorial. 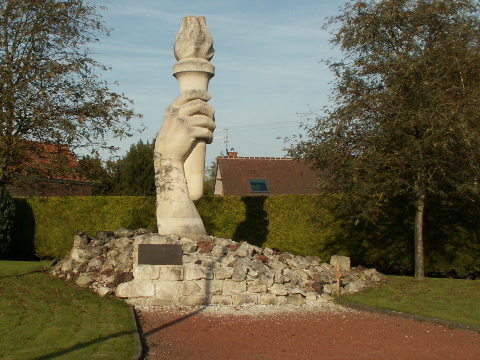 Part of the Commune of Neuville-Saint-Vaast the hamlet of La Targette is named after the habits of the patrons of the local café (Now called the Saint Vaast) at the junction by the Military Cemetery. This was the main road into Arras for the farmers and other sellers of produce.

For most the journey would be made on foot and in the evening on returning to Neuville the first port of call would be the café. Here the weary traveller would linger a moment before heading home. In modern French : s’attarder but in Ch’ti : s’atarjeu. Getting home she who must be obeyed would complain about the hanging about—l’attargette. It didn’t take much effort to transform many an establishment or, as here, the locality into La Targette. The only target was the bar !

In October 1914 the village of Neuville was occupied by the Germans (In fact Bavarians). Every building was fortified. The cellars turned into shelters. Trenches were dug and fortified with barbed wire. A 60cm railway was laid to ensure that the garrison could be provisioned. To the south the Labyrinthe network of trenches tunnels and fortified emplacements was no less formidable.

During the 2nd Battle of Artois which opened on 9th May 1915 the 11e Division d’Infanterie (DI) managed to get into the outskirts of the village. The village cemetery was taken and lost and regained, but more than two thirds of the buildings remained in German hands.

The 5e DI, commanded by the vigorous Général Charles Mangin, were brought up from a quiet area (ironically just to the south of the Chemin des Dames scene of a French military disaster in 1917 resulting in the temporary removal of Mangin from high command).

At the beginning of June Mangin launched his first attacks and these were bloodily repulsed by the Germans. The French believed that they had numerical superiority and Mangin relentlessly pursued the Germans from house to house interchanging his battalions to keep them fresh whilst pounding the village with every piece of artillery that he had available. 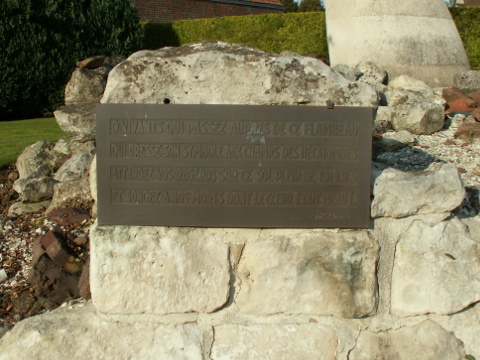 By the 9th June the village was taken, or at least, its ruins had been taken for little of the buildings remained. Since then Neuville has risen from the ashes as can be seen from its coat of arms and its motto—Resurgam (I will arise).

The monument was constructed in 1930 and inaugurated on the 20th October 1932. A certain Mr Rafour was the sculpture. The plaque carries verses by Emile Poiteau.

You, the living who pass by this torch,
raised above the bloody battlefield,
survey this ground replete with graves
and think of our dead whose hearts were good.

It represents the hand of a soldier carrying a torch rising out of the ruins of the vilage. The base of the monument is formed from blocks recovered from the rubble of Neuville-Saint-Vaast.

On the wrist of the hand is a French Military Identity Tag carrying the name : Neuville-Saint-Vaast, 9 mai 1915.

Planted along the road into the town are fifty-two mountain-ash trees commemorating the fifty-two members of the commune who died in combat. This road, Rue du 11 novembre, is also known as the Cité des Mutilés founded by the village’s post war benefactor Ernest Petit. 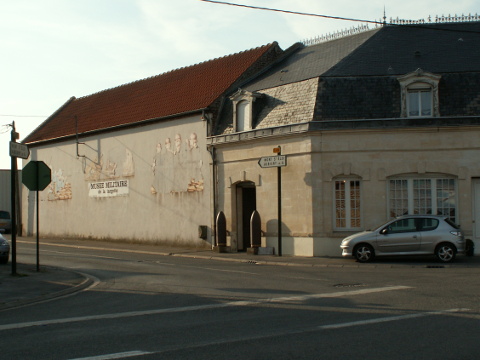 Directly opposite the monument at the cross roads on the main road is a very good museum with two floors of displays which have been kept in excellent order. There is a parking area behind it off the side road (behind the extension on the left of the photo).

The only cautionary note being that there is not a great deal of explanation, however the museum is open every day from 0900 to 2000 hours. The entrance fee is about 4 Euro.