Webmatters : General Barbot and the 77e Division Monument at Souchez

Souchez is a village some 12 km north of Arras on the main road to Béthune D 937. You will pass Cabaret Rouge Cemetery on your left before descending the hill into the village. The monument is on your left and there is a parking bay just behind it.

Note the memorial to those from the Pas de Calais who died during the conflicts in North Africa which is alongside.

In order to distinguish French units from the British Army I have tended across the site to retain their own titles as opposed to translating them. A French: Régiment d’Infanterie (RI) consisted of three battalions which served together. Regiments were numbered and the -e equates to -th : 120e = 120th.

Ernest Jacques Barbot was born on the 19th August 1855 at Toulouse. He graduated as a Second Lieutenant on the 1st October 1877 and slowly climbed the ranks. In September 1912 he became the Colonel of the 159e RIA (they were known as the 15-9, Quinze-Neuf).

By the age of fifty-seven he had lost both his wife and son and would devote the rest of his life to his Grelus as people from the high Alps are called.

Once Italy had declared its neutrality the 159e RIA was transferred from that frontier to Alsace and their accomplishments soon brought Barbot to the attention of his senior officers.

Having already effectively taken over command of his own brigade he was made up to Général de Brigade on the 8th September 1914. To this was added a second brigade, creating what was designated as the: Division Barbot.

In September 1914 his Division was transferred to the Artois Front and officially designated the 77e Division d’Infanterie. In the battle for Arras, Barbot’s convictions and his soldiers’ tenacity were fundamental in saving the town from occupation by the Germans.

As the German line continued to encircle Arras to the north, Barbot and his Division found themselves transferred to the area in front of Souchez – their Corps was now officially designated the 33e CA and was commanded by Général Philippe Pétain.

As a Colonel Petain had commanded the Arras Regiment (33e RI) and one of his young lieutenants was Charles de Gaulle.

On the 9th May 1915 the 2nd Battle of Artois was launched by the French against the hills of Notre Dame de Lorette and Vimy. Their opening assault brought renown and glory to the Corps.

On its right the Moroccan Division stormed across the plain and took Vimy Ridge, four kilometres away, in a single rush. In the centre Général Barbot’s men made superb gains getting as far as Hill 119, Givenchy and the outskirts of Souchez.

Hill 119 became known as The Pimple to the Canadians in 1917 and is the steep hill immediately opposite the site of Barbot’s monument.

Unfortunately the speed of their advance proved to be the 77e DI’s undoing and under violent bombardment they were forced to retire from Givenchy, back as far as the Cabaret Rouge on the hill above Souchez. (Near the site of the CWGC Cemetery). 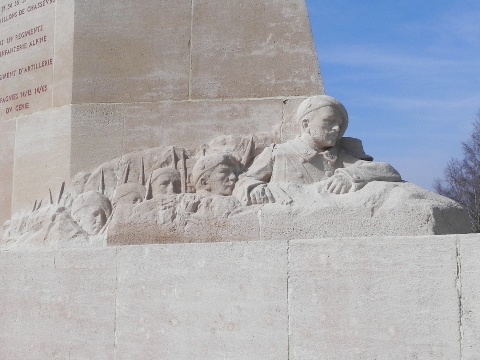 The soldiers leave their trench

Barbot installed his HQ in a rough trench at Cabaret Rouge despite the fact that the position was still under bombardment. On the 10th May 1915 at about 1100 hours whilst dashing across the open ground to talk to one of his colonels Barbot was hit by shrapnel.

With a severe chest wound and a broken arm, he was carried back to Berthonval Wood (just in front of Mont St Eloi) and from there transported by car to the Dressing Station at Villers-Châtel. The surgeons found that they could do nothing for him. Général d’Urbal dispatched a staff office to award Barbot the Cross of a Commander of the Legion of Honour.

He died a short time later. His last words were recorded as:

A soldier without fear or reproach; having taken a glorious share in all the battles before Arras over a period of seven months, found on 10th May a heroic death, at the head of his victorious troops.

His citation alludes to the Chevalier Bayard (Pierre Terrail, 1476-1524) who became known for his chivalry whilst fighting for France. A superb and honourable cavalry commander whose fearlessness had won or saved the day on many a battlefield — to the extent that his name has become synonymous for these attributes.

To this day Ernest Barbot is known to the French as the Bayard of the Great War.

If you visit the cemetery at Notre Dame de Lorette you will find his grave is the first on the left, next to the main entrance of the cemetery.

The Germans would hold out in Souchez for another couple of months until the 26th September when Barbot’s men would finally take control of the mud and wasteland that had been the village.

Souchez saw such terrible fighting that it was completely obliterated. The Germans had made use of the local Château de Carleul and the Sucrerie (Sugar Mill) and turned them into fortresses. By changing the water system they had also managed to partially flood the valley – now called Zouave Valley.

The French writer Henri Barbusse served as a stretcher bearer during the battle and described that whilst Carency had at least a few outlines of buildings, Souchez seemed to have disappeared, not a wall was left standing, the trees blasted away, it was hard to believe that in this muddle of torn brick, timber and metal you could still make out the cobbles – this used to be a road.

It had become: a trickling purée of wood, stone and bones ground and kneaded into the mud.

The village was reconstructed after the war with the aid of the London Borough of Kensington whose soldiers had served in the sector.

The monument was designed by Paul Dechin and sculpted by his father Jules.

Work began in 1935 under a committee headed by Général Pétain, and the monument was inaugurated on Sunday the 9th May 1937 in the presence of numerous VIPs and thousands of veterans of the Alpine Division.

The statue is not only dedicated to Général Barbot himself, as commander of the 77e DI, but also to his men who fell in Artois between the 1st October 1914 and the 20th February 1916.

A bronze Général stands as he often did with a hand in between two buttons of his greatcoat (like Napoleon).

A gesture of his right hand suggests that he is trying to protect his soldiers who can be seen climbing up out of their trenches in berets — no steel helmets in 1915.

The Général’s own regiment the 159e RIA was an Alpine Regiment and at their conception in 1889 were equipped with the dark blue chasseur beret, a huge tarte of an affair.

It was Barbot’s habitual headgear rather than an officer’s kepi. You will also notice the regiment’s numerals: 159 on his collar

The commander of Britain’s tanks would notice the beret and have it adopted as being more practical inside their machines than the peaked cap. The Tank Corps becoming the first in the British Army to wear the headgear.

On the collar of the leading soldier coming out of the trenches behind the General you can see the 97 insignia of the 97e RIA. Above their heads are listed the units forming the Division. On the other side of the monument their battle honours are engraved.

On either side of the monument are two commemorative plaques. One is to Général Plessier who had preceded Barbot as commander of the 77e DI and was the first Général killed in action (Alsace, 19th August 1914), the other to Général Stirn who took over at Barbot’s death but was himself killed two days later.

By coincidence Stirn had in 1914 succeeded Général Pétain as Colonel of the 33e RI, the Arras Infantry Regiment.

Above them all a winged victory holds aloft branches of laurel.

A local newspaper: le Réveil du Nord reported that in the morning thousands upon thousands of veterans carrying standards by the hundred gathered at Notre Dame de Lorette to pay homage to their fallen comrades.

In the afternoon the crowd of perhaps 100,000 moved to Souchez where the monument was draped in red, white and blue. Many of the veterans were overcome with emotion and had to be treated by the medical staff on hand. Général Keller read the address for the absent Maréchal Pétain, who had been taken ill.

Général Barbot was a man who knew how to natter with his men, to praise their courage and his ease of attitude, far from diminishing his prestige, created an atmosphere of that mutual affection which can be found in men who pursue the same goal and expose themselves to the same dangers.

Barbot was a regular visitor to St Pol whilst stationed in Artois and an anecdote tells of how one day whilst wandering through the town in his usual greatcoat (without belt) and tarte he was accosted by the garrison commander for his attire.

Barbot listened to the tirade and then calmly asked how many days in the cells would satisfy the Major’s displeasure, and saluted. The Major blew his top for such insolence and was in mid second tirade when his eye caught the two discreet stars on the General’s sleeve. With a red face the Major withdrew !

Another story recounted in the Regimental History is of an ordinary soldier encountering an elderly comrade in the trenches.

Why on earth have you not been demobilised at your age ?
They won’t let me.
Why ever not ?
Because I’m the General.

The other memorials in Souchez