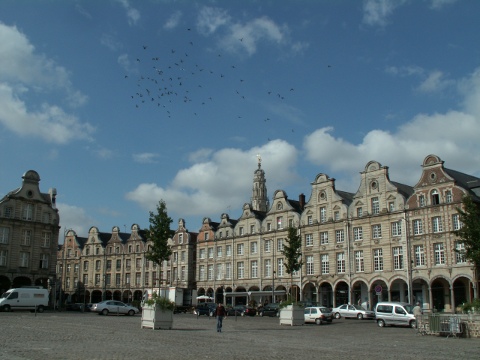 The capital of Artois: Arras has been no stranger to conflict over the centuries. Whilst it is no longer a military town following the closure of the Citadel in 2009 there are numerous indications of its military past not least of which is the Vauban citadel itself.

Contrary to what you learnt at school the final – s – in Arras is pronounced.
The emphasis being on the second syllable : Ah-rass.

In the 14th century Arras became renowned for the quality of its tapestries, and the town’s name became linked with the article itself – he was stabbed behind the Arras.

Maximilien de Robespierre was born here in 1758 and studied at the college before continuing on to Paris. He was later to return for a while to take up a law practice before turning his attentions to politics. One of the main architects of The Terror during the French Revolution he was, in 1794, to fall a victim to his own creation.

In the First Battle of the Marne in September 1914 the French army managed to halt the advancing German army’s sweep through Belgium into Northern France.

Whilst being pushed back during the Race to the Sea the Germans secured themselves on all the major ridges overlooking the town and from there began the slow pulverisation of Arras. Many of the public buildings were destroyed by shelling and later on by aircraft dropping bombs; almost everything of what you see today has been rebuilt.

The town, like Ieper in Belgium, was always just on the front line and earned the name of la ville martyre.

Some of the bloodiest battles of the war were fought with the aim of capturing the surrounding heights and pushing the front away from the town which had become a vital position to the Allies.

From the end of 1914 though most of 1915 the French slogged it out with the German defenders of the villages to the north-west. Neuville St Vaast, Souchez, Carency, Notre Dame de Lorette; became synonymous with their epic struggle.

In 1915 the French had tried taking Vimy Ridge but had only succeeded in pushing the front as far as its base. In 1916 as the Germans slowly sucked the French towards Verdun the British took over the line and town.

The population had for the most part been evacuated but some remained. By 1917 there were more British soldiers garrisoned here than the pre-war population.

Many a Canadian believes that the 9th April 1917 marks the Battle of Vimy. In some ways it does, but Vimy was only part of a much greater battle being fought to the east by the British Third Army. A battle which cost more lives on a daily basis than the Somme in 1916.