The citadel is steeped in history despite never actually being used in its primary role as a fortress, a reputation which earned her the name of: la Belle inutile, The Pretty — useless.

It is situated on the inner ring road to the south west of the town on the Boulevard Charles de Gaulle. Following signs marked Citadelle will take you there.

It is immediately before the Arras Memorial to the Missing. There is a large no payment parking lot at the traffic lights. From there a free bus service runs into the main town : Ma citadine.

During the battle of Arras in 1917 the moat was at one point used as a parking lot for tanks.

Up until July 2009 the citadel was still used as a military garrison and housed the Arrageois Regiment: 601e Régiment de Circulation Routière.

Under the military policies of President Sarkozy the regiment was disbanded in July 2009 and the citadel sold to the town for a token sum. Arras has since used the parade ground as the scene of its July music festival.

The town of Arras was first fortified in the 13th Century with a basic defensive wall. At the time the Abbey was outside those walls and as the abbey grew in importance the walls were extended in a covering arc.

Under Charles Quint and his son Philip II of Spain, the town’s defences were greatly enhanced as was befitting an important frontier town whose ownership was in constant dispute.

The walls took on the more familiar style of jutting triangles and dem-lunes that we expect of a fortress.

A demi-lune is a short exterior section of wall that covers the area between two bastions (the pointed sections of the defensive wall).

For an idea of what the fortifications would have looked like you should visit the superb Spanish citadel at Montmédy in the Ardennes.

Following the capture of Arras in 1640 by Louis XIII of France and Maréchal Turenne’s successful defence of the town in 1654 the walls were not looked after and began to deteriorate.

Louis XIV’s master engineer Vauban proposed building (or re-building) a line of fortresses within the newly liberated areas of France to ensure not just their security but also that of the routes towards Paris.

Arras was to be included in the scheme despite its distance from the new border with the Spanish Netherlands. Some of its citadel’s construction features also suggest that it was intended be handy in the event of the locals becoming nostalgic for their previous rulers.

Vauban proposed building a pentagonal shaped citadel on a hill near to the abbey and in proximity of the river Crinchon which could serve both as a source of water for the garrison but also in times of trouble as a method of filling the moat. 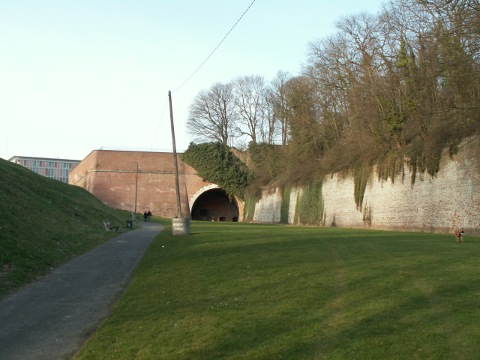 The town’s outer fortifications were also brought up to date and the remains of one of these (originally Spanish) sections can be seen at the top of the hill near to Arras Hospital — the Owls’ Bastion (bastion des chouettes). Much more of this section would still have been visible in 1917.

As her primary task was to protect the kingdom from a Spanish Netherlands whose border had been pushed back beyond reach, the decreasing importance of Arras as a strategic site made her purpose redundant and she popularly became known as La Belle inutile – The Pretty, useless.

Since 2008 the citadel has been listed as a UNESCO World Heritage Site. 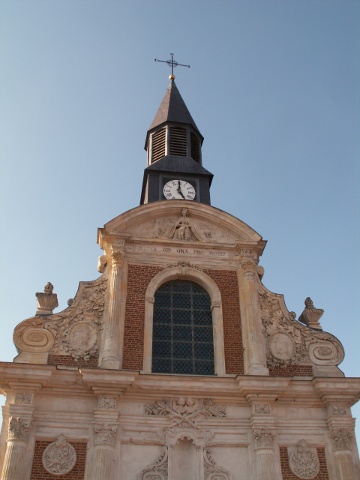 Within the citadel is the oldest church in the town dedicated to Saint Louis. Built in 1673 it was later restored by Napoleon III.

An historic monument since 1920 the chapel has been forced to undergo military occupation from time to time, as a storage house and armoury.

She now serves as a memorial chapel to the Engineers.

Within the guard house at the main gate there is a plaque placed by Louis XIV in honour of his father who had captured the town in 1640. 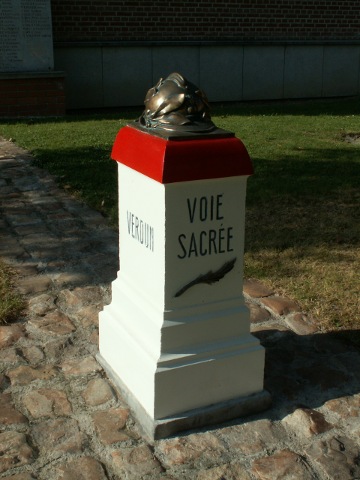 A more recent addition at the instigation of Colonel Philippe Gueguen has been the erection of a Voie Sacrée pillar to mark the 90th anniversary of the battle of Verdun in which the 601e Regiment’s founding formations could be found.